Straight from the field, several service tips for reducing comebacks and putting customers at ease

If you’re a tire dealer or technician, you probably already know that TPMS has been mandatory equipment on all cars since 2007. You’re probably also well aware that many of your customers do not know this, nor do they generally know much about the fragile nature of the sensors inside their tires. This can sometimes cause some customer/dealer conflict, especially in the area of the corrosion issues to which TPMS valve stems have proven particularly – and fatally – vulnerable. 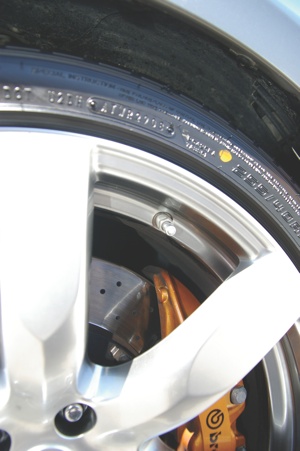 Corrosion problems plague nearly every part of the valve stem. Metal parts rust-weld themselves to the stem and freeze. Mistakenly install a brass valve core into the stem and within a short period of time it will be impossible to remove without destroying the internal threads. Best of all, each type of corrosion weakens the sensor stem itself, making the act of trying to remove stuck parts without breaking the stem an exercise fraught with danger.

Removing Stuck Parts
Andrew Pearl, a manager at Direct Tire & Auto Service in Boston, gave me his magic trick for loosening corroded parts. “A little PB Blaster, let it sit and just work it out, as opposed to one good pull. You just work it back and forth and sometimes you get lucky.”

Mike Ryan, a manager for a near­by Firestone Complete Auto Care, agrees. “We were able to take PB Blaster and basically just soak the living heck out of the area where they’re stuck together…they were able to break free if you move it slowly.”

Ryan notes he had even tested PB Blaster against “a different kind” of penetrating oil. “We got the PB one off, and then we had to clean the other one off and use PB on it to get it loose.”

However, sometimes not even the power of PB will help. Weakened valve stems will often break under the least amount of torque, and quite often even if you get the nut loose, the damage already has been done. “Many of the threads [of the corroded TPMS sensor stems] that the nut goes onto tend to basically turn into dust,” Ryan adds.

To make this process even more complex, there also are the NHTSA regulations on TPMS, which basically say that if a sensor breaks before it gets into your shop, you can put in a temporary rubber valve stem if you have to, but if it breaks in your shop you can’t release the car until the TPMS sensor is replaced. Some frustration was expressed by many of my interviewees at the effects of “irreparable long-term corrosion” being defined by NHTSA as “breaking in your shop.”

Replacement Availability
This, of course, means that dealers and techs must have quick access to replacement sensors in an environment where covering the market involves a very large number of sensor SKUs. “I do know that there have been times when we needed to keep a customer’s car” due to lack of replacement sensors, says Keith Cudgma, a district manager for Firestone Complete Auto Care.

Since few installers will actually carry the wide variety of replacement sensors needed to cover the industry, they rely on the quick availability of OE and aftermarket sensors from dealers and auto parts wholesalers. Pearl agrees that the availability of OE sensors is much better than it had been in the early years of TPMS. “Typically dealers have [OE sensors] on the shelf because it’s a known problem,” Ryan concurs. “I would say that I can probably get 80%-90% of the sensors that are out there.”

The two managers differ widely in their assessment of aftermarket sensors, however, with Pearl dismissing replacement sensors that “don’t pick up readings” as “more headache than they’re worth,” and Ryan praising them. “There’s very, very few that when you install them you have any issues with…same as the OE as far as compatibility.”

Ounce of Prevention
Especially vulnerable or not, the only real key to preventing corrosion is proper maintenance of the parts. That’s why the service packs, which contain replacements for every small part that attaches to the valve stem – the nut, valve core, valve cap and any rubber gaskets necessary to seal the valve stem hole – are so important.

While some customers do seem to think that the service pack is really just some kind of boondoggle so that tire dealers can charge more, nothing could be further from the truth. It’s critically necessary to change these parts often to ensure proper TPMS function, to keep corrosion from taking hold inside the threads, and to keep the rubber gaskets from drying out and cracking.

“It’s really just like the old days,” says Ryan. “Whenever we were going to do a tire we’d replace the valve stem. It’s the same principle, basically. You have rubber in there – it dries out, the seal may leak from that. You don’t want that to happen.”

As to customer opposition, Ryan says he has not seen any problems with the cost of service packs “because they cost pretty much the same as a valve stem used to cost.”

Communication is Key
As difficult as it may be to deal with corroded valve stems, dealing with the customer can sometimes be more difficult if not handled correctly. Everyone we spoke with stressed the extreme importance of communication at every step.

What that mostly means is telling the customer first if you even think that a valve stem might break. If you predict to the customer that something might break before it happens, when it does happen they will at the very least know that it did not happen out of carelessness.

Ryan stresses the value of being prepared for possible issues. “And if you know of some vehicles that usually have more [corrosion] problems than others, like Dodge or Chrysler, for instance, you know who to tell, ‘Hey, we’ll probably have a problem. We’ll try not to, but…’”

At Firestone Complete Auto Care, Cudgma informs, “If we’re going to service the tire and it looks like the TPMS sensor is going to break or require replacement, then we inform the customer prior to starting the job. If we end up breaking it and we haven’t informed the customer, we replace the sensor at no charge.”
It also means you have to let the customer know honestly what the expense might be. “You definitely have to be upfront and honest with the customer. Hands down you have to do that,” Pearl agrees.

“Some people will get frustrated,” adds Ryan. “I don’t think they realize the expense that can be involved with TPMS. It’s like with early runflat tires. People didn’t realize they were going to last 30,000 miles and there was no spare and you were going to have to spend $1,200 for a replacement set. People are starting to get used to it.

“Usually I can make people happy about what they were mad about.”