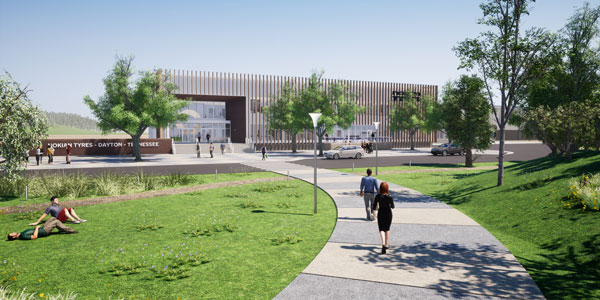 Nokian Tyres has started construction on an administration building at its new factory in Dayton, Tennessee.

Nokian Tyres has started construction on an administration building at its new factory in Dayton, Tennessee, its first production facility in North America.

The building will include meeting spaces, offices, a gym, garden and other amenities.

Nokian Tyres is partnering with EMJ Construction to construct the facility, which is scheduled for completion in mid-2020. Work on the adjacent production complex is largely complete; trial production began in early July, and commercial tire production remains on schedule for early next year.

The two-story, 26,500-square-foot administration building’s interactive, open-concept office space will accommodate as many as 100 employees.

The company is including a greenspace area outside the building, which features a garden between the parking lot and the building’s entrance complete with a pond, trees, park benches and a walking path. Patios will dot the exterior of the structure.

Nokian Tyres aims to double North American sales by 2023, the company says. Once capacity reaches four million tires per year, the factory will employ as many as 400 people, from production operators to engineers, managers and specialists in several core business areas.