Indirect Tire Pressure Monitoring Systems (TPMS) are the systems that do not have air pressure sensors inside the tires. Rather, they detect a low tire by comparing relative wheel speeds via the Anti-lock Brake System (ABS) wheel speed sensors. When a tire loses air, its diameter decreases slightly. 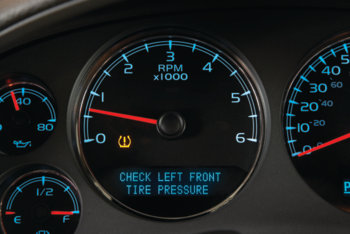 Older indirect TPMS are not as sensitive to changes in tire pressure as direct systems that ­actually monitor the air pressure inside the tire, but they are not as expensive ­either. An indirect TPMS is a relatively ­affordable add-on to a vehicle if it’s already equipped with ABS. Even so, the vast ­majority of vehicles that have TPMS use ­direct systems rather than indirect.

Federal law requires the TPMS to alert the driver if the pressure inside a tire has dropped more than 25% below the recommended inflation pressure. The same rules apply to direct and indirect TPMS. Many vehicles abandoned indirect systems for ­direct systems to meet the federal mandate.

One of the weaknesses of older indirect ­systems is that they may not turn on the warning light if all the tires are underinflated by a similar amount. If the recommended pressure is 32 psi, but all the tires are 24 psi (down 25%), the system won’t know there’s a problem because all the tires will be rotating at the same speed when the vehicle is being driven.

New systems are taking advantage of better wheel speed sensors and modules to make indirect systems work. Indirect TPMS began making a comeback in 2011 on all Audi models. The highly popular Honda Accord switched to indirect TPMS for the 2013 model year. The 2013 Mazda CX-5 is now also using an indirect TPMS. Some of the VW Golf platform vehicles have switched to an indirect TPMS. Most of these models have the ­optional ABS and stability control system.

But even the newer systems suffer from the ­inability to read the tire pressure when the ­vehicle is sitting still.

Where To Find Reset Procedures

All of these applications use a similar technology and strategy to detect a low tire, but there is no common reset procedure. Toyota is probably the best, with only one simple reset procedure for all of its indirect TPMS (though a slightly different procedure is used on the Lexus models).

With so many different reset procedures, it’s ­important to make sure you’re using the right ­procedure for the vehicle you’re servicing.

TPMS reset procedures may also be found in the vehicle owner’s manual (if it hasn’t been lost). Open the glove box and check the index in the owner’s manual for any TPMS information.

As a rule, most indirect TPMS have a RESET button for recalibrating the system. A reset is typically ­required after adding air to a low tire, after changing or servicing a tire, or after rotating the tires on a ­vehicle.

Hold on, though: The relearn procedure is not complete until the vehicle is driven at 19 mph or faster for at least an hour. You don’t have to do this, obviously, but your customer should be made aware of the fact that the TPMS reset procedure won’t be complete until the car has been driven awhile. During this time, the TPMS system may not be able to detect a low tire, so make sure all the tires have been inflated to the correct pressure ­before the ­vehicle leaves your shop.

Indirect TPMS Making A Comeback On Some Imports