What many motorists don’t know is that their A/C system works year round, not just during the hot summer months. On most late-model vehicles with automatic climate control systems, the A/C system cycles on and off as needed to dehumidify air entering the passenger compartment. This helps clear the windshield and prevents the other windows from steaming over during cold weather. 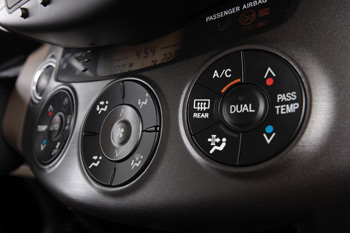 One clue that something may be amiss with the A/C system, therefore, is poor defroster performance. If air is blowing out of the defroster ducts on top of the instrument panel but the defrosters are slow to clear the windshield, the A/C system may not be dehumidifying the air. The problem could be low refrigerant due to a leak, a weak compressor that is not developing normal system pressure, or a control problem with a switch or sensor.

A/C problems can occur any time of year, not just during the hottest days of summer — though that’s when motorists are most likely to notice poor cooling performance from an A/C system. Many will put off needed repairs as long as the weather is tolerable. But give them a few days of sweltering heat, and their resistance will melt like butter in the hot sun.

A/C Recharging
The DIY market for A/C parts still exists, but mostly for simple tasks such as recharging a leaky A/C system with additional refrigerant. More ambitious jobs include replacing leaky hoses or seals, or a bad compressor. Diagnosis is often the biggest challenge, especially if the cause of a no-cooling problem is not obvious. Is it the refrigeration circuit, an electrical problem or a control issue? Difficult cooling problems and repairs are best left to an A/C professional.

Adding refrigerant to an A/C system is fairly simple. First, you locate the low-pressure service port, which is typically on a hose or the accumulator toward the back of the engine compartment. You then connect a service hose and valve to a can of refrigerant. The valve is turned to puncture the top of the can, which allows refrigerant to flow into the hose (this is necessary to displace air inside the hose).

The service hose is then attached to the quick-connect fitting on the low-pressure service port. 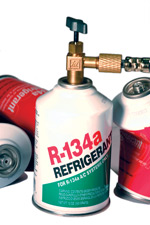 The amount of refrigerant in an A/C system is critical for proper operation. An overcharged system will not cool efficiently, nor will a system that is low on refrigerant. Many late-model A/C systems have very small refrigerant capacities (only a can or two), so one has to be very careful not to overcharge the system.

A gauge set that connects to the high- and low-pressure A/C service ports is essential for accurate charging. A professional gauge set or a recharging station weighs the refrigerant as it is added to the system.

Leak Repairs
Adding refrigerant to an A/C system will often restore normal cooling, provided the compressor, control valves, sensors, switches and condenser fan are all working properly. But if the A/C system has a leak — and the leak is not found and repaired — sooner or later the new refrigerant will leak out and the system will stop blowing cold air again.

R-134a contains no chlorofluorocarbons (CFCs) so it won’t harm the ozone layer as R-12 did. However, R-134a is a greenhouse gas that can contribute to global warming. R-134a retains heat 1,300 times more than carbon dioxide, which is currently a hot environmental topic as governments look for ways to minimize CO2 emissions.

There is still considerable debate over the impact man-made CO2 and other gases are having on average global temperatures and weather. A pound or two of refrigerant leaking out of a car’s A/C system over a period of several months isn’t going to bring about the end of civilization as we know it. But the combined effects of zillions of ounces of refrigerant leaking from zillions of vehicles all over the planet could have a measurable impact on global warming.

The point here is that anyone who is buying R-134a refrigerant in small cans probably has a leaky A/C system. A late-model vehicle should not leak more than a few fractions of an ounce of refrigerant a year. If it can’t hold a 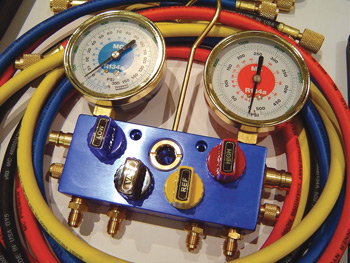 charge from one cooling season to the next, it has a major leak that needs to be diagnosed and repaired.

Another method for finding leaks is to look for telltale dye stains on system hoses, the compressor and condenser. Many late-model vehicles are factory-filled with refrigerant that contains colored dye. The dye is typically yellow or green, and gives off a fluorescent glow when illuminated by an ultraviolet (UV) light.

If the A/C system does not contain dye, a small dose of dye can be added to the system when it is recharged. Or, refrigerant that already contains dye can be used to recharge the system. It may take a few days of operation before the leak shows up, but sooner or later it usually will — unless the leak is in the evaporator inside the HVAC unit under the dash. Leaks here are essentially invisible because the evaporator is buried and can’t be inspected directly. For these types of leaks, an electronic leak detector is often needed to sniff out the escaping refrigerant.

Some motorists are of the mindset that it’s cheaper to keep adding refrigerant than to fix the leak. This approach may get them though the hottest days of summer, but as was explained earlier, you need A/C year round for dehumidification and defrosting. What’s more, a leak that isn’t fixed can cause bigger problems down the road — such as a possible compressor failure or internal corrosion that ruins other expensive parts such as the condenser or evaporator.

The way to permanently fix a refrigerant leak is to replace the hose, seal or other part that is leaking. The other option is to add some type of A/C sealer product to the system to plug the leak. A/C sealer products contain various ingredients that can seal small pinholes in metal tubes, the evaporator or condenser, or cause hose seals and compressor shaft seals to swell to slow down a leak.

Such products can provide an easy and cheap fix for a small leak. But if overused, too much sealer in the system may gum up the compressor or orifice tube. Chemicals in sealer products can also plug up refrigerant recovery and recycling equipment.

Compressor Oil
Compressors require a certain amount of PAG oil to keep their innards lubricated and turning freely. The amount of oil used in a late-model A/C system isn’t much — only a few ounces in some cases — so it doesn’t take much of a leak to significantly raise the risk of compressor failure. What’s more, the type of PAG oil in the system must be the exact type specified by the vehicle manufacturer. PAG oil comes in various viscosities, and using the wrong one can also cause compressor failure.

Contamination Issues
Another fact to keep in mind is that as refrigerant leaks out, air and moisture seep into the system. Air displaces refrigerant, making the system work harder and harder to provide cooling. Air contamination will reduce cooling performance and can also cause compressor noise. Moisture can freeze and block the orifice tube or expansion valve, which controls the flow of refrigerant through the evaporator, and it can react with the refrigerant to form acids and sludge that gum up the compressor and control valves.

The only way to get rid of air and moisture in an A/C system is to vacuum purge it with a special A/C vacuum pump. This is something else few do-it-yourselfers know anything about. If they’ve replaced a hose, a compressor or other A/C component themselves, the A/C system will be full of air and moisture. It won’t accept refrigerant very well when they attempt to recharge the system, and the A/C won’t cool well because it’s contaminated with air.

The correct way to complete an A/C repair, after a faulty component or leaky hose has been replaced, is to vacuum-purge the system for 30 minutes, and to make sure it holds vacuum before any refrigerant or oil is added. If the system holds vacuum, then it can be easily recharged with the specified amount of refrigerant and oil as needed.

If an A/C system has suffered a compressor failure, or it is found to be full of black gunk when a hose or other part is replaced, it should be flushed with an approved A/C cleaning chemical to remove the contaminants. If this is not done, any debris that remains in the system may cause the orifice tube to plug, or the compressor to fail.

Some types of condensers cannot be flushed because of their design (those with parallel flow tubes or extruded tubes with very small openings). The condenser acts like a trash collector and will catch any debris that comes out of the compressor. So if it can’t be flushed, it will have to be replaced. Following a compressor failure, both a new orifice tube and an in-line filter should be installed.