While the topic of engine management sensors might seem dark and mysterious, engine sensors share common functions in all modern vehicles. While their individual configurations might be different, the function of any engine sensor is to provide input data which the powertrain control module (PCM) processes to control output functions like the air/fuel mixture ratio, fuel injection mode, spark timing advance, camshaft timing, throttle opening and idle speed. Input data is processed by a set of mathematical equations programmed into the PCM’s logic system. This cycle of input, process, and output is called “closed-loop” operation. 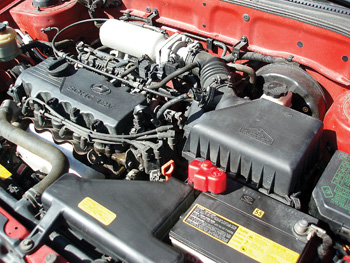 Types of Data Sensors
Basically, engine data sensors are designed to measure temperatures, pressures, positions, speeds, air flow, and the chemical composition of the exhaust stream. Temperature-measuring sensors include the engine coolant temperature (ECT) sensor and the intake air temperature (IAT) sensor. The ECT sensor is vital because the PCM bases some of its fuel calculations on engine coolant temperature. Similarly, the PCM might base some of its spark advance and fuel ratio calculations on IAT sensor data.

Generally, the ECT and IAT receive a 5-volt “reference” voltage supply from the PCM. Since the electrical resistance of a temperature-sensing or “thermistor” sensor changes with temperature, the ECT and IAT output voltage might, for example, range from 3.5 volts at 50 degrees F. to .35 volts at 230 degrees F. These voltages and temperatures generally should be the same for both ECT and IAT sensors after the engine “cold-soaks” overnight. To improve accuracy, some manufacturers utilize two-stage ECT sensors that abruptly change resistance at a specified point in the temperature range. Consequently, it’s important to realize that one diagnostic strategy does not fit all sensors.

Pressure Sensors
Data from the barometric pressure or “baro” sensor is essential for correct fuel and spark advance calculations. When the ignition is first turned on, the baro sensor records variations in barometric pressure created by weather changes and local altitude. As the engine starts, the baro sensor measures the difference between the recorded barometric pressure on the outside and inside of the intake manifold. At sea level, the baro pressure might drop from 29.5 Hg (inches of mercury) outside the manifold to 22.0” Hg inside the manifold. This pressure differential is called Manifold Absolute Pressure (MAP) and the “baro” sensor is therefore called a “MAP” sensor.

The signal generated by the MAP sensor is usually a voltage signal ranging from slightly over 1.0 volt at idle to about 4.5 volts at wide-open throttle. Signals from other types of MAP sensors, like those used on older Ford engines, generate barometric pressure signals ranging in frequency from 159 Hertz (Hz) at sea level to about 138 Hz at 8,000 feet altitude.

MAF Sensors
Although mass air flow (MAF) sensors have assumed many different configurations during the past twenty years, modern MAF sensors generally use the “hot-wire” design in which a mild electrical current is used to heat a metallic wire. As airflow past the wire increases, the wire cools down and, if the airflow decreases, the wire heats up. Throughout these temperature changes, the electrical resistance of the wire changes, which also changes the flow of electrical current through the wire. The most common cause of MAF sensor calibration errors is an accumulation of dirt or grease on the hot-wire assemblies because that and other contamination changes the thermal sensitivity of the hot wire.

Position Sensors
To accurately calculate engine spark timing, the PCM must also know the position of the engine crankshaft. The crankshaft position sensor (CKP) can be a two-wire variable reluctance or a three-wire Hall Effect type. The variable reluctance sensor sends a variable voltage signal (averaging about 3.5 volts during cranking) to the PCM when the crankshaft reluctor passes through the magnetic field created by the crankshaft reluctor. The reluctor is usually a toothed ring, similar to those seen on axle shafts designed for anti-lock braking systems (ABS).

The Hall Effect sensor is a more precise sensor that uses a shutter wheel to measure crankshaft position. As the shutter wheel passes through the magnetic field created by the Hall Effect sensor, a solid-state switch contained inside the Hall sensor turns a reference voltage signal “on” and “off.” Whereas the variable reluctance sensor generates a relatively imprecise alternating current and analog signal, the Hall Effect sensor generates a very precise on/off digital signal. Both sensors are designed to measure both position and speed of a rotating crankshaft or camshaft.

A more modern version of the Hall Effect sensor, called a “magneto-resistive” position sensor, can also measure the position of a non-rotating shaft and can also determine the direction of rotation. While magneto-resistive sensors are primarily used on anti-lock braking systems, they can be also found on some engine crankshaft sensor applications.

Throttle Position Sensors
A throttle position (TP) sensor is simply a conventional potentiometer or “pot” that changes voltage according to position. Most TP sensors are powered by a 5-volt reference voltage supply supplied by the PCM. Most produce about .8 volts at closed-throttle and a maximum of 4.5 volts at wide-open throttle. Throttle position sensors shouldn’t be confused with throttle switches, which are limited to indicating only the closed, intermediate, and open-throttle positions on many early import vehicles.

Oxygen Sensors
The term “oxygen sensor” is currently used to describe zirconia-based oxygen sensors. Depending upon the amount of oxygen contained in the exhaust stream, a zirconia O2 sensor generates a zero-volt signal indicating a lean fuel mixture and a .9-volt signal indicating a “rich” air/fuel mixture ratio. Most fuel systems are designed to constantly switch from about .2 to .8 volts, with .5 volts indicating a “stoichiometric” or chemically perfect combustion process. The PCM generally stores a diagnostic trouble code when the O2 sensor loses its voltage range and sensitivity.

In contrast, air fuel ratio (AFR) sensors are generally composed of two zirconia-based sensors. Together, they generate a steady high or low voltage signal indicating a rich or lean air/fuel mixture. The operation of AFR sensors is too complicated to describe in this space, but suffice it to say that the PCM measures the air/fuel ratio by measuring a very small electrical current flowing into the AFR sensor.

Sensors and Trouble Codes
The three failure points for any sensor are the sensor, the sensor wiring, or the sensor processing circuit contained inside the PCM. Depending upon the self-diagnostic capacity of the PCM itself, several strategies might be used for measuring sensor performance.

A second process detects open, shorted, and shorted-to -ground circuit problems. For example, a disconnected coolant temperature sensor (open circuit) will generally show -40 degrees F. on a scan tool data stream. If the two wires are shorted together (shorted circuit), the indicated temperature will be +300 degrees F. If the PCM detects either extreme, it will measure that input against that of the intake air temperature sensor. If the PCM detects a significant difference in values, it will store an applicable diagnostic trouble code.

As mentioned above, a known-good throttle position sensor will display about .8 volts at closed throttle and 4.5 volts at wide-open throttle. If the wide-open throttle output voltage equals five volts, the PCM will determine that it has a bad TP sensor. If the TP voltage isn’t consistent with engine speed and manifold absolute pressure, the PCM knows that the TP sensor itself is defective. In any case, modern engine electronics is not a dark and mysterious subject. Instead, it’s simply a matter of mathematics combined with digital logic.