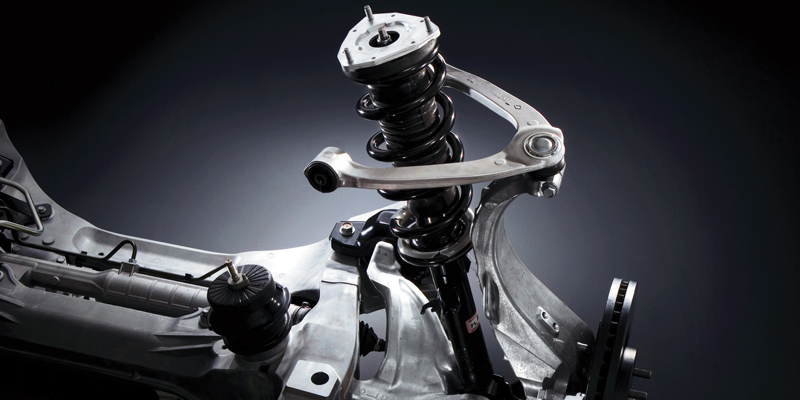 It is not uncommon to see the Nissan V6 or four-cylinder engine in a Maxima, Altima or Sentra go more than 300,000 miles without a major issue — and the same is true for the chassis. But depending on roads it has traveled, the suspension needs just as much or more attention when compared to the engine.

It is not uncommon to see the Nissan V6 or four-cylinder engine in a Maxima, Altima or Sentra go more than 300,000 miles without a major issue — and the same is true for the chassis. But depending on roads it has traveled, the suspension needs just as much or more attention when compared to the engine.

Nissan spends a lot of time perfecting the springs and struts for a platform. The goal is to strike a balance between comfort and handling. But once the car has traveled more than 100,000 miles, the balance may have been lost due to wear in the struts/shocks, springs and mounts.

Nissan engineers tune the spacing and pitch of the coils, as well as heat treat components to generate different spring compression rates. They can also change the geometry of the spring by making it a barrel shape that affects how loads are absorbed. This is why a Nissan car might have different left and right springs in the front. Every time the spring is compressed or cycled in engineering terms, a tiny amount of fatigue happens to the spring. Over billions of cycles that can occur in 100,000 miles, the spring could have lost its ability to control the body and suspension.

The shock or strut controls how the energy in the spring is absorbed and compressed. This means the specifications for the spring and strut are linked. It also means that when one component is worn, it impacts the other. If you were to replace a spring and not the strut, the new spring might overpower a high-mileage shock or strut. The same is true in some high-mileage vehicles if you replace the strut or shock and not the spring.

Upper strut mounts and bearings can be hammered to death by the time a Nissan vehicle reaches 150,000 miles. The upper strut mount supports the vehicle weight and counters both braking and acceleration torque. Most mounts are sandwiches of rubber, metal and bearings. Over time, the rubber can lose its ability to isolate the suspension from the body. Bearings can also seize and bind, causing vehicle steering problems.

Unlike a rubber bushing, a spherical ball joint is designed to pivot through multiple planes. Because the ball joint always pivots at different angles, it tends to wear out more rapidly than bushings. Wear can be found on ball joints, tie rods and some sway bar links of Nissan vehicles.

Non-load-bearing ball joints, on the other hand, maintain precise movement in a steering or suspension system. These can be classified as sway bar links on late-model Maximas and Altimas.

Wear in a non-load-bearing ball joint will cause a noticeable change in the camber, caster or toe angle of a front suspension. This is why non-load-bearing joints are preloaded to compensate for wear. Unloaded control arm ball joints, for example, should be tested for preload when the suspension system is disassembled.

Nissan uses both metal-to-metal and plastic-lined ball joints. Almost always, these are sealed for life. But there are aftermarket ball joints and control arms that can be greased. The reason why these joints last a long time is because of the high-quality boot that seals the joint from the elements and keeps the grease inside. If you do see a boot of a ball joint or tie rod that is damaged, failure will occur.

Nissan’s recommended procedure for inspecting a ball joint rarely involves a pry bar or set of pliers (unless they are connected to a dial indicator). The carmaker typically recommends measuring the swing torque in a lot of applications. But they do give an endplay specification that is usually 0.1mm. Some tolerances are higher depending on the application and the endplay is typically very small and needs to be measured with a dial indicator.

Tie rod end ball and socket wear is different because the loads are different. Instead of supporting loads, they change the direction of the wheels. This can cause wear in the vertical plane rather than a horizontal plane. The “dry-park” testing method will indicate excessive wear in most tie rod ends. If you are inspecting a tie rod with the suspension fully extended, you may miss the excessive play in the joint.

Inner tie rod ends found on steering racks should be tested for excess wear by listening for a knocking or clicking noise as the steering is turned. Whatever the method used, remember that small amounts of wear in each tie rod end can add up to major variations in toe angle.

A high-mileage bushing on a Nissan may start to wear and lose the ability to control the movement of the suspension. The bushing might not make noise, but it could cause issues with the alignment. In some cases on Maxima and Altima models, a bushing will change caster and camber angles when cornering. This can cause changes in the handling and steering feel.

Some Nissan control arm bushings are hydraulic. They push fluid between chambers to control the movement of the bushing and absorb vibration. These bushings are tuned to the vehicle and tire package. If a leak is detected, replace the bushing or control arm.

Check out the rest of the November digital edition of Tire Review here.﻿

Advertisement
In this article:Nissan, service, Suspension