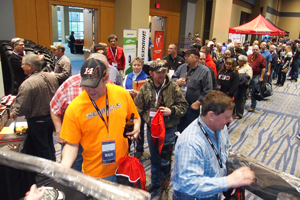 After years of watching its annual dealer conference progressively grow larger and larger, the under-theme of K & M Tire’s 2016 gathering had to be “more and more.” 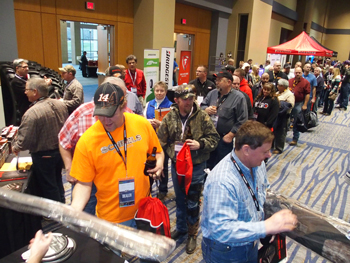 By far, the hot item at the K&M Tire Dealer Conference trade fair were Cabella’s gun sleeves, given away by Bridgestone Americas. The tiremaker faced long lines as it gave away hundreds of the cases.

During the course of the conference, independent dealers had the opportunity to attend any of eight educational sessions covering a wide-range of topics, some about specific K&M Tire or supplier programs and most on dealer-centric topics like brand building, selling TPMS service and key retail benchmarks.

Separately, Yokohama Tire Corp. donated $20,000 to K&M Tire’s charity organization “K&M Cares,” which the distributor created in 2015. That amount was split into one $10,000 donation to Food for the Poor Inc., K&M Tire’s long-time charity partner.

The other $10,000 gift was presented to Dan and Tim Ronda, the third-generation owners of Ronda Auto Centers in Lowell and Grand Rapids, Mich., who were chosen at random from among Yokohama Advantage Dealers attending the conference. The Ronda’s then gave $5,000 to a pair of their local charities, Kids Food Baskets and Volunteers in Service. Ronda Auto Centers will be celebrating its 100th anniversary in 2018.

The annual highlight of the K&M Tire Dealer Conference is the now massive group dinner, which featured dozens of door prizes provided by K&M and its suppliers. After dinner, former television personality Roy Firestone provided the entertainment with hilarious and heart-warming stories, dead-on imitations of famous sports personalities, and a few songs.