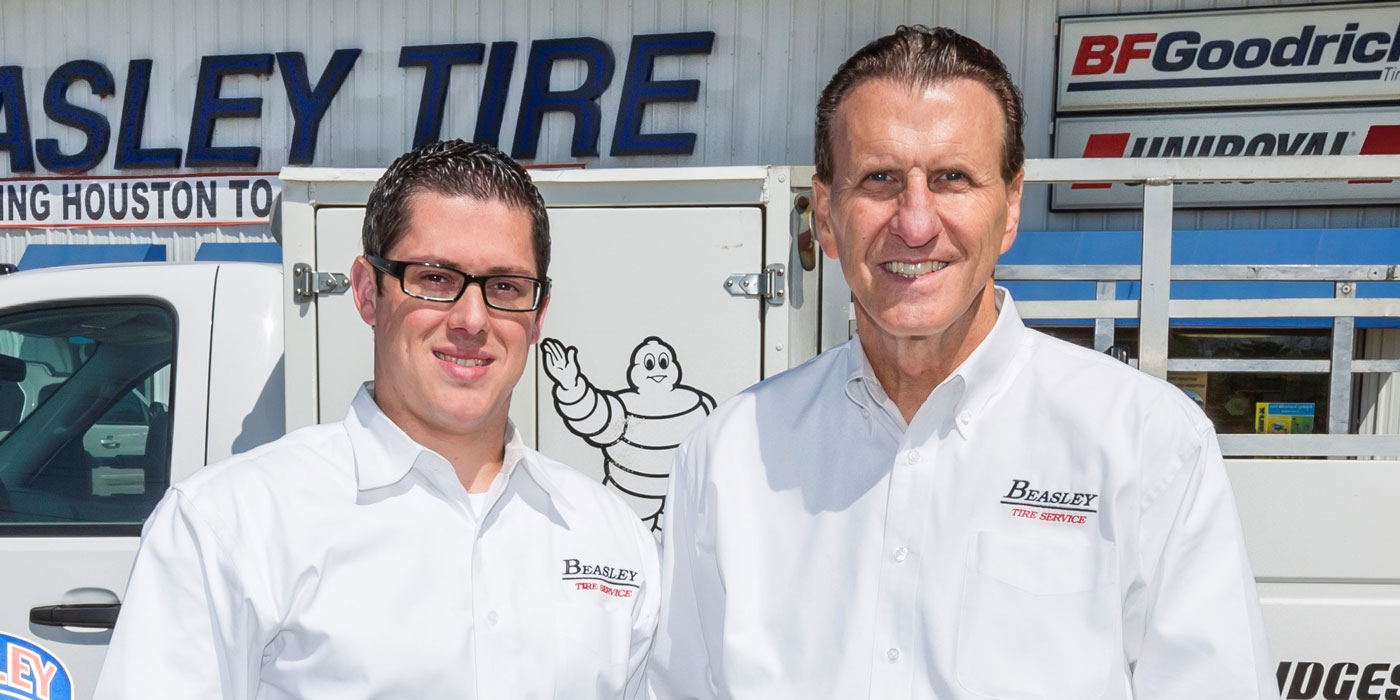 Since taking the helm of Beasley Tire Service, Bob Beasley has expanded the company under his father’s customer service motto, “we make it happen” for the customer.

“We make it happen” is the motto Bob Beasley has preached ever since taking over Beasley Tire Service in Houston in 2005. Sure, the company’s “official” motto is “Driven by Service,” and both ring true when you hear Bob talk about the customer service philosophy he’s curated since busting tires under his father’s supervision as a 12-year-old.

Bob inherited this mentality from his father, E.B., who started the company with his wife in 1968 out of a service station with one commercial service truck. Although they did consumer vehicle work, too, the company accumulated 17 service trucks that went out on calls for fleets before it ever sold tires.

Finally, in 1972, E.B. opened his first store on the north side of Houston, followed by another in 1980 just 13 miles up the road. All three of his boys worked in the family business, but when E.B. passed away in 2001 and his wife suffered of a stroke in 2003, the two sons still active in the company divided the family business. Bob’s younger brother took a retail store in Kingwood, and Bob inherited the commercial part of the business in Houston.

From there, Bob set his sights on expansion.

In 2010, he opened a second store in San Antonio; In 2011, he opened a third store in Kenedy, about 60 miles southeast of San Antonio. In the following five years, he would open up another four locations of Beasley Tire Service across southeast Texas as well as a Michelin MRT retread facility next door to his Houston store. As a member of the Michelin Commercial Service Network (MCSN), Beasley Tire Service is “one of the leaders in the country as far as service times, or service call-to-roll,” Bob says.

Currently, 80% of the business is commercial work—that’s been the business’s bread and butter since day one—but Beasley Tire now “sells every type of tire except aircraft and motorcycle,” Bob says.

This year, the company plans to expand its store in Victoria, Texas, but because of the coronavirus pandemic, all other growth plans are on hold. And as a whole, Beasley Tire Service hasn’t been immune to the effects of COVID-19.

“COVID-19 definitely affected us,” Bob says, but “what’s affected us more than that is the price of oil. Mostly everything south of San Antonio is oil country. When oil prices drop, oil companies can’t make a profit and stop drilling.” This means the oil towns come to a standstill, which translates to less tire and service work, he adds. But, “now they’re starting to ramp back up.”

During these times, Bob stresses to tire dealers to “really understand your expenses and every aspect of your organization, so you can stay healthy through this.” He said one aspect that’s helped Beasley Tire Service maintain a positive outlook is its “we make it happen” attitude and employee-first culture.

“We try to promote a culture that makes an employee want to work for us,” he says. “We treat people very fairly; we have full benefits. We’re an honest company, and we go to market ethically. We take good care of our employees. If I do that, they’ll take care of our customers.”

In the future, Bob says asset management and providing a wider array of services to fleet customers will become even more important for commercial tire dealers. That’s what he and his son, Michael, the company’s vice president next in line to take over the company, are working on. They’re also testing the waters with mobile tire service for consumer vehicles—it’s just one of the new ideas Bob has come up with over the course of his career that’s helped Beasley Tire differentiate itself.

“If you’re not willing to change with the times, your days are numbered,” he says. “There’s a lot of change in tire business, and you have to be committed to change with it to stay relevant.”

Advertisement
In this article:Commercial Tires, coronavirus, Proud to be an Independent Tire Dealer