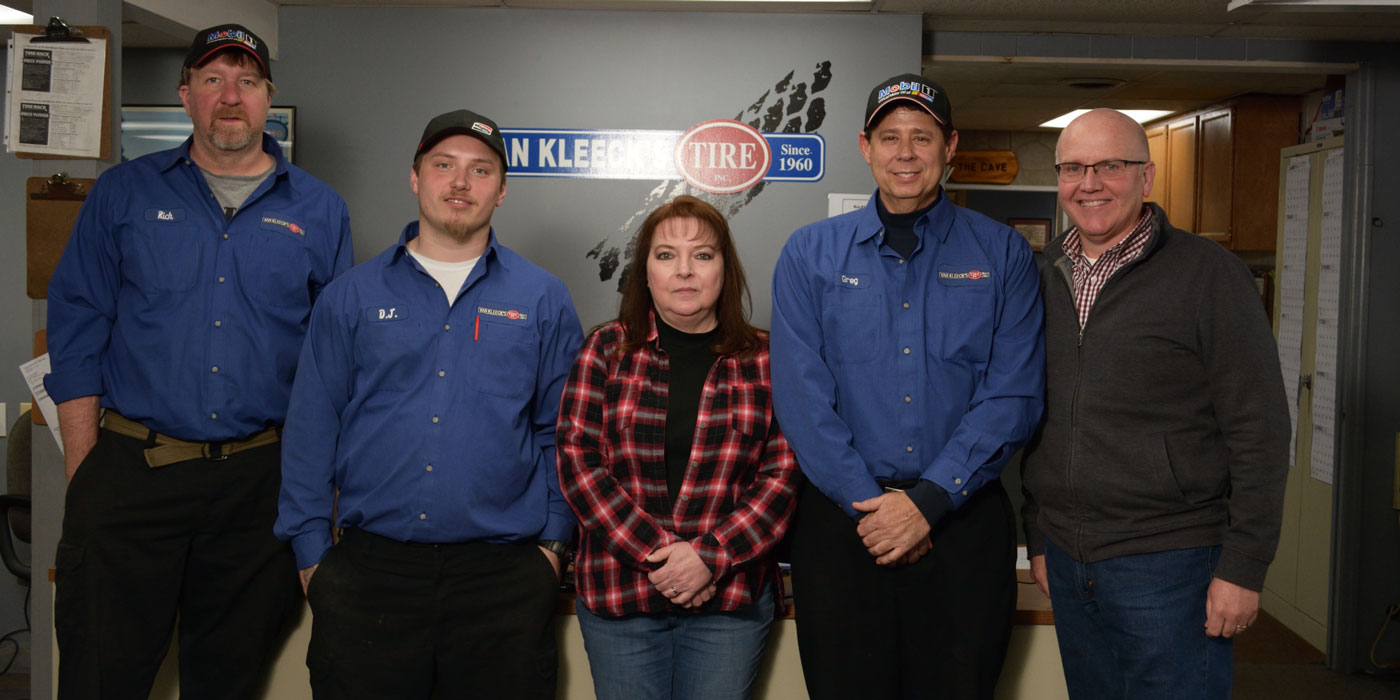 Listening to customers is key for Van Kleeck’s Tire staff that extends to selling tires on the dealership’s website because that’s what customers want.

“From passenger cars to entire fleets, sub-compacts to trucks, busses, and cranes, sports cars to SUVs and off-road vehicles, Van Kleeck’s has your tire, and the best free cup of coffee on the planet!” If you read this sentence on the landing page of Van Kleeck Tire’s website, you’ll get a feel for the culture of the almost 60-year-old company.

A unique culture, indeed, with the business being passed down from Owner Clayton’s parents, Robert and Janet Van Kleeck, who started the business in 1960, a few months after their son was born. As the company is about to embark on its 60th anniversary in 2020, Clayton reminisces about growing up in the business and how his parents played a key role in laying the foundation for its continued success. “I have the benefit of living next door to my parents, so they still know if I go to work late,” chuckles Clayton, who doesn’t take for granted their nurturing relationship throughout the years.

Fast forward to the year 2000, when Bob and Janet retired, and Clayton and his wife, Karen, transitioned into ownership. This very smooth transition was attributed largely to a loyal staff and cooperative vendors, says Clayton, who as the second-generation owner has the pleasure and responsibility of carrying on his parents’ legacy. “My parents built a good foundation and we’ve been able to build upon it,” says Clayton.

While word-of-mouth advertising is a big factor in bringing in new customers, Van Kleeck’s Tire engages in a heavy amount of merchandising and marketing efforts, with radio accounting for a majority of its advertising spend. The voice in all radio advertising is Clayton, who is all about making his message fun and rememberable. His passion for radio stems from his childhood, where he said he used to make recordings using an old cassette tape player. “Back in the ’90s, as I started to take over the business, it was decided that I would do most of the radio commercials,” recalls Clayton. “And, I wanted to make it fun. I didn’t want people to think about tires as just ‘blah, blah, blah.’ So, everything had to have humor in it or something of a lighter tone — so people would laugh or at least smile when they think about us. And, I wanted it to be personal.”

Clayton feels this approach is a big differentiator for his business. He even carries this mentality to the dealership’s advertising taglines, as noted earlier in the “home of the best free cup of coffee on the planet” example.

While Clayton ensures that his advertising is fun, one thing it never includes is any mention of price. And, with good reason. Instead, he focuses on the dealership’s value proposition. “Our pricing is very competitive, but we don’t start out with a low price and then add on. We include everything [in the price]: the mounting, the balancing, the valve service.” This strategy of including all services in one price, versus itemizing, was dictated by his customers. “We’ve been told by our customers that this is a value [to them]. During one season, one year, we attempted to go to itemized pricing, and it was the worst thing we ever did. We got so much negative feedback.” Van Kleeck’s also provides free flat repairs for all tires purchased from the dealership and free rotation every six months or 6,000 miles.

Listening to customers is a common theme at Van Kleeck’s Tire that extends to selling tires on the dealership’s website because that’s what customers want.

“They ask for it,” says Clayton, “we did not desire [to do] this. We did it out of response to customers asking for it for years. We’ve accepted that people buy tires on Tire Rack, and we’re a preferred installer for them.”

The Van Kleeck’s website has a wide selection of tires, with more than 12,000 tires in stock.

What Clayton especially likes about selling tires online is that, in essence, his store is open 24 hours a day because he knows customers shop around the clock. In fact, he’s had customers place orders anywhere from 8 p.m. on a Sunday night to holidays, like Christmas Day and Easter Sunday. Another advantage of doing online tire shopping at Van Kleeck’s is that customers don’t have to pay for the tires until they’re installed.

“We also don’t sell cheap or bargain tires. For most people their car is their second-biggest investment. [Our customers’] safety is riding on our product, and our families and loved ones are out there, too. Don’t get a good price instead of a good tire. You’ll get both at Van Kleeck’s Tire, since 1960,” says Clayton, who adds that Van Kleeck’s remains committed to the concept that a good value will always beat a good price. “We strive to give customers a good price, we will guarantee them a good value. There are things we could do to make our products and services appear cheaper, but it’s not who we are and it’s certainly not how we want to sell tires.”

Clayton knows the importance of providing value to customers. Once they receive great service, they not only come back, but they become “raving fans” who continue to build his business by sending more new customers his way.

One way that Clayton thanks customers is by sending those who buy four tires a coupon for a discounted oil change. And, they really appreciate it because they aren’t expecting it, he explains. With the additional offer of free tire rotations on all tire sales, Clayton gets customers in the habit of coming back for service every 6,000 miles, at which point they can also redeem their discounted oil change coupon.

Extending the customer focus to an extremely generous and heartwarming degree, Van Kleeck’s operates a fund named after George, one of its longtime employees, who always did the right thing and whose actions spoke louder than words. After his passing, a fund was created in his name as a way to give back to customers in need — those hardship cases where customers cannot afford to pay for tires or repairs. All the money obtained from recycling metal wheel weights and other metals goes directly into the fund. It’s a way for a salesperson, who realizes a customer is in dire need for tires/service and doesn’t have the means to do so, to make a difference in someone’s life. It is done quietly and without fanfare, with the customer being informed of this charitable deed on their invoice, at which time they are given a copy of the “George Fund” letter that explains how it works.

These acts of benevolence have returned multiplying dividends in great word-of-mouth advertising, but that’s not why Clayton does it. He says it’s a “left hand doesn’t know what the right hand is doing” type of thing. A man of faith, Clayton says he does it from the heart as an act of “loving one another,” as cited in the Bible.

When asking to share some other unique things about his business, Clayton is quick to share that there are several long-term employees at Van Kleeck’s (some who are second-generation) who have contributed to its consistent quality and respected image over the years, helping to fuel its success. And, he also touts the fact that the dealership was an early adopter of getting women involved in the business — namely his mother, his sister, his wife and his daughters, as well as other women who, to this day, hold very critical roles within the company.

Van Kleeck’s is one of the few locally owned, active-owner-operated tire businesses left in the area, and Clayton shares that one of his secrets to success has been to keep a watchful eye on his company’s expenses. “You can sell [as much as you can] and work as hard as you want, but if you don’t keep track of the back-office expenses, you’re going to fail,” advises Clayton. “I have to be aware of what my competitors are doing, but I also have to know what we’re doing.”

Clayton says through the years, he’s also kept track of being fair with employee salaries, making sure he pays everybody well.

Adhering to the adage “If you take care of your people, they will take care of you,” Clayton says he refers to his employees as his staff, the people with whom he works, noting that he doesn’t like to be called “Boss.” And, he also shines the spotlight on his trusted vendors, like K&M, that can “get me tires when I need them at a competitive price,” that have been important to the Van Kleeck’s Tire business model.

Like pieces in a puzzle, committed customers, vendors and employees who all fit so well together create a dealership masterpiece that has earned its success in the community and the rights to be named this year’s K&M Top Shop winner.

Is K&M Tire one of your distributors? Do you have what it takes to be a Mr. Tire/Big 3 Tire Top Shop? Nominations are open for the 2021 Awards program! Visit www.MrTireBig3TopShop.com today.

Proud to Be an Independent Tire Dealer: How Perseverance Played an Important Role in Forming Polo’s Point S