Recognizing diversity in the community and making those differences a positive for customer and company alike have been keys to the growth of maritime Canada’s Miller Tirecraft. 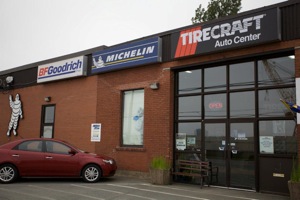 Founded as Miller Tire Services Ltd. in 1978 in Halifax, Nova Scotia, by Roy Miller and his son Brian, Miller Tirecraft now is run by third-generation family members. The three Miller brothers are in their early- to mid-30s. Joel is the marketing manager. Youngest brother, Brett, is the financial officer. Corey, the oldest, is the president and currently national president of their buyers’ group, Tirecraft. All have college degrees – two of them MBAs – yet all of the brothers started in the tire business the same way. “We grew up at the store. We swept, we sold, we stacked,” says Joel.

The brothers have divvied up responsibilities quite well, according to Joel, matching skill sets to tasks they like to do. The choices did not come about by default, however. “We did personality testing to learn how we could work better together,” Joel explains. “Getting that kind of information really helped us as a family business.” 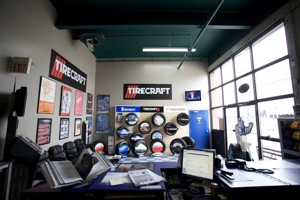 The testing, administered to the whole management team and management candidates, was done via the company’s human resources department. “It was a real eye-opener,” Joel says, to find out how each person learns best, what day-to-day frustrations can be avoided and precisely which performance incentives work best for each individual.

Growing Stronger
Miller Tirecraft has grown from a single location to 13 stores in major towns stretching over three provinces. The company added two of those stores just in the last four months of 2011, and sales overall continue to be strong. Joel attributes this in part to Atlantic Canada being shielded from much of the depressed economy that has afflicted other regions. All of Miller’s business is retail, and a significant portion, by sales volume if not units, comes from its commercial tire division, which includes a Michelin retreading operation.

Halifax, as the largest city in Atl­antic Canada and a major commercial and naval port, is the company’s biggest market, with three stores. Joel is most proud of the Barrington Street location, which he calls “our biggest up-and-comer,” having seen the most sales growth in the past year. The shop has four bays, six full-time employees and one part-time employee. Despite the shop’s small size, gross sales for 2010 were more than $1 million, with 70% coming from tire sales and 30% from service. 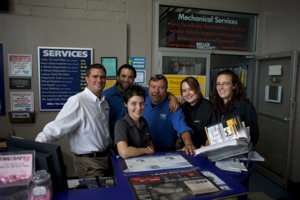 The store’s young manager, Liz Kilpatrick, has held a position at every level in the company, including the commercial division, and even as manager, she still installs tires when the shop is busy. Joel points out that all of the staff members at this location are very customer-oriented, maintaining a high level of engagement and excitement. “To see them work during the winter rush is a thing of beauty,” he adds, admiringly.

“Placing a young woman in charge of a traditionally male-oriented business was never considered a risk because of Liz’s strength of character,” Joel notes.

“Now we have two young women on the counter and our service and profits have never been better.”

Joel notes that research shows 55% of tire purchase decisions now are being made directly by women, “And whatever we can do to make that more comfortable for them, including having female staff, has been great for us.”

Bridging the Skills Gap
Finding qualified technicians is a challenge to tire shops everywhere. Miller Tirecraft has helped itself and newcomers to Canada by partnering with the Immigrant Settlement and Integration Services, a Nova Scotia-based community organization that offers pre-employment services. Two employees have joined Miller Tirecraft though this partnership, which matches immigrants’ existing skills with employers seeking those skills. The only cost of the program to the employer is providing the job. Says Joel, “Going outside our traditional avenue of hiring has been extremely successful for us, and we will continue to grow our staff in this manner whenever possible.” 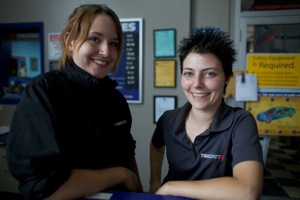 Mirroring the Community
“Our city is a patchwork of multiple ethnicities, religions and orientations, and our store reflects and celebrates that,” Joel explains.

For the past two years, the company has been a sponsor and participant in the Halifax Pride Festival, which bills itself as Atlantic Canada’s largest lesbian, gay, bisexual and transgender cultural event.

A team of employees representing several different orientations participates in the parade, handing out promotional items and candy along the route. Joel and his wife drove a store truck in last year’s parade. “We’re not going to alienate anyone; we are an inclusive family here,” says Joel.

Halifax also has a great naval tradition, and a Miller store is located directly across from a naval station there. Always ready to support local members of Canada’s defense forces and their families, Miller Tirecraft for the past four years has been a sponsor of the summer Military Family Days with a booth where staffers give out prizes to children and generate brand recognition for the stores. That’s in addition to offering special discounts to military members, their families and base support personnel.

The single biggest community focus for the company has been the Drive for the Cure fundraiser for the Cana­dian Breast Cancer Foundation. Seven years ago, Miller was looking for a unique way to fundraise for the CBCF when the company discovered a supply of pink valve caps. 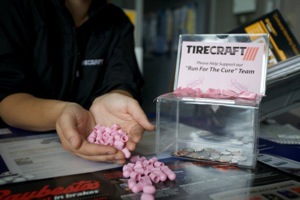 “We’ve been trying to sell a set of these pink valve caps at $5 a set to every customer who has come in the door since then,” says Joel. All of the money raised goes to the CBCF, he added. “Recently, our partners with the Tirecraft buyers group have picked up on the program nationally, and the fundraiser has grown from our single store to over 170 stores nationwide,” he adds proudly. And as a group, Tirecraft so far has raised more than $150,000 for the CBCF.

In Tune with New Media
Miller Tirecraft also stays in touch with its community by utilizing technology. The new avenues of interaction include social media and consumer-oriented websites. “We have a young management team, so we’re all in tune with our iPads and iPhones. It’s easy for us to know what works because we use the technology every day,” Joel explains. Consumers see the company as being cutting-edge, and that fits well with the corporate brand.

“Rather than seeing our small size as a detriment, we are often used by our partners as a testing ground for new initiatives,” Joel continues. “This gets us in at the ground floor of developing new methods to connect with our customers.”

When Groupon launched in its market last year, Miller was the first local independent dealer to test the waters of the daily deal craze. “Since that time, we’ve seen a race to the bottom as more and more dealers attempt to out-price one another in a bid for customers’ affection,” Joel observes. “As one of the originators, we didn’t have to drop our price, and our ROI remained strong while we turned all those new customers into returning customers throughout the year.”

The company uses its Twitter feed to keep customers aware of manufacturer discounts and upcoming events, and maintains a presence on the consumer review website Yelp.com.

“Customers can visit the Yelp site and retrieve mobile coupons for our business, as well as leave comments and suggestions for users,” Joel says.

“We have research to know who our customers are, and we do everything we can to get them back into the store,” he remarks, “because the opportunity-cost of bringing in a new customer is much greater than keeping a current customer happy.”

Joel is very proud of the fact the company has maintained multiple generations of customers. “I get people who used to buy tires from my grandfather calling me now saying, ‘I need another set of tires,’ and I expect that call every two years.”

By keeping focused on the community and the role it can play in it, Miller Tirecraft may well expect those calls to continue into the next generation.