Retreads remain key in some segments, but are they a viable option for consumer tires?

Tire retreading has been around nearly as long as there have been new tires. According to TRIB, tire retreading began in 1904 and continued with few changes until the 1940s.

The development of synthetic rubber and the shortage of tires during World War II were major factors in the growth of retreading. The U.S. military even operated its own retread plants, including portable plants near the front lines. 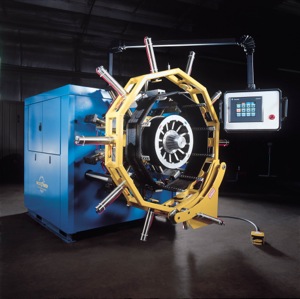 By the late 1950s, the market had shrunk to the point that there were 12,000 retread plants in the U.S., most of them passenger tire plants and most of those directly connected to specific retail dealers.

Since then, the number of plants continued to drop drastically. Remarkably, the amount of rubber used in retreading remains nearly the same. Today’s retread plants are much larger and cost millions of dollars to outfit and operate. In 2011, there were an estimated 680 truck retread plants in the U.S.; 18 plants were producing large OTR retreads, and five were producing aircraft retreads.

But there were only four producing passenger retreads.

One of the most successful retread applications today is in the aviation industry. All commercial airlines, and the military, use retreaded tires. Nearly 80% of all aircraft tires now in service in the U.S. are retreads. More than 100,000 aircraft retreads are used annually, with an average tread life of 270 takeoffs and landings per tread.

The major shortages of new OTR tires over the past 10 years would have been disastrous for the mining and construction industries if not for the availability of OTR retreads. OTR retread plants were able to greatly expand production and supply much of the demand.

Undoubtedly, the mainstay of today’s retread industry is commercial truck retreading. Truck retread plants produce almost one-half of the replacement tires used annually in the trucking industry. A total of 15.3 million truck retreads were produced in 2011, with a market value of $3.1 billion.

Retread Specifics
What exactly is a retread? In general, retreading is the process where worn tires, called “casings,” receive a new tread. The worn tread is buffed away and a new tread bonded to the casing.

In “bead-to-bead” retreading, a retreaded tire also has a new rubber veneer applied to the sidewalls (primarily as a cosmetic improvement) and often is called a remolded or remanufactured tire. Incidentally, within the retread industry, the term “recap” is seldom used anymore.

Tires that are candidates for retreading are first subject to visual inspection, often aided by non-destructive inspection equipment. The acceptance rate for truck tires is higher than passenger tires because of the stronger construction of truck tires (typically designed for retreading) and the better care that fleet operators give tires. The reject rate for passenger tires is as high as 85%.

After inspection, tires are trued to a specified diameter and have their remaining tread mechanically removed by extremely accurate high-speed buffers.

The non-destructive testing machinery now used by all of the major retread manufacturers and many other retread plants has changed the way tires are retreaded for the better. Much like a CT scan or MRI allows physicians to make better diagnoses, retreaders can determine if steel cords are damaged or rusted, or if a tire has been run underinflated to the point it shouldn’t be retreaded.

“Mold cure” and “precure” are the two systems used to apply the new treads. Both systems have advantages and can produce quality finished products. Similar to the process used in new tire construction, a combination of time, heat and pressure is required by both systems to vulcanize the new rubber to the tire.

In the precure system, the buffed tire has a thin layer of cushion gum wrapped around the tread area and the precured tread rubber with its new tread design is then applied. The tire is then placed in a curing chamber and the tread is adhered to the tire through the vulcanizing process.

The U.S. Department of Transportation has established standards for passenger tire retreading requiring that a plant DOT code and “R” symbol (along with the additional identifying information) be stamped or branded on the sidewall of all passenger retreads manufactured or sold in the U.S.

Most truck tire retread plants in North America are affiliated with major brands that establish standards and provide technical assistance. When proper manufacturing and quality control procedures are followed, retreaded tires can be as safe as new tires and have similar adjustment percentages. Passenger tire retreaders, however, are generally not affiliated with a new tire producer.

’Green’ and Cost Advantages
Retreading enjoys some significant environmental advantages. A new passenger tire typically contains seven or eight gallons of oil, but only two to three gallons are used in most retreads. A new truck tire requires well over 20 gallons of oil; retreading that same tire may take only seven. Also, since retreads are made up of as much as 85% recycled materials, retreading keeps millions of tires in use for thousands of additional miles – and out of landfills.

Historically, the biggest advantage of retreads has been cost. Retreads typically cost around 40% less than new tires and save the commercial and military aircraft industries more than $100 million a year. Retreading truck tires saves the trucking industry over $3 billion each year.

However, in the passenger car and light truck car market, the presence of inexpensive radials (primarily imported from low cost production countries) has reduced this cost advantage to around 10%. The result over the last three decades has been a continual downward trend in the use, both domestically and internationally, of passenger and light truck retread tires.

The rising cost of new tires, along with the environmental advantages of retreads, has led to speculation over whether the passenger car and light truck retread market is on the verge of resurgence.

To be sure, there are hurdles. According to Dave Stevens of TRIB, the first is the continuing presence of inexpensive new tires. Additionally, the proliferation of tire sizes forces retreaders into expensive investments in molds for the mold cure process used for almost all passenger tires.

Also, the quality of repairs to passenger/light truck tire casings is more varied compared to truck tires, making it hard for retreaders to even find decent casings.

Rick Thomas, program manager of retreading for Goodyear Commercial Tire Systems, emphasizes the problem of adequate supplies of casings. One of the results of higher tire prices has been more activity by used tire resellers. Many sound used tires that might otherwise be candidates for retreading are bought up and resold on the used tire market, which has grown in recent years thanks to the poor economy.

Tires with higher rates of treadwear, such as winter and performance tires, often are the best candidates for retreading because the casings are usually newer. In Europe, for example, bead-to-bead retreaded winter tires are well accepted and are a substantial part of the winter tire market.

The high cost of the capital equipment needed to manufacture mold cure passenger tire retreads is another limit on the potential expansion of the market.

With today’s proliferation of sizes, it’s important for a retreader to do careful market research to identify those sizes with sufficient volume potential to make a reasonable profit – assuming reliable sources of casings can be identified. The most likely candidates for retreading today are the larger sizes commonly found on crossovers and SUVs. These tires are expensive enough that the lower price of a retread may be attractive to some vehicle owners.

The most optimistic prediction may be that of Harvey Brodsky of the Retread Tire Association. While acknowledging that the market for passenger tire retreads is unlikely to ever approach the size it was in the 1950s, he thinks the market is beginning to show signs of rebirth.

Brodsky expects that growth to continue as more consumers realize the financial and environmental benefits of retreads, but emphasizes that it will be in bead-to-bead retreads in selected sizes.