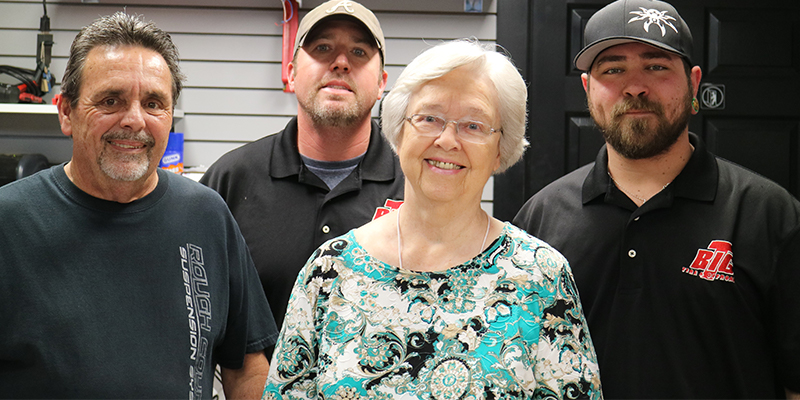 What started as her husband’s dream of opening a tire shop became Elizabeth Tucker’s life and passion. Now with her grandson as her partner in business, Big T Tire has grown and proven itself over the years

Elizabeth Tucker went into the tire business with her husband in 1960, then out of business, then back in again. She owns Big T Tire in Columbus, Georgia, resting on the Alabama border. What started as her husband’s dream of opening a tire shop became Tucker’s life and passion. Together, the two built the business and grew it until the shop ran into some hardships in 1968.

“The economy in Columbus got really bad,” says Tucker. “We’re close to Fort Benning (a U.S. Army base) and they transferred a whole division out and the economy just couldn’t support the business.”

The couple then returned to the industry in 1975 when the economy began to recover. Tucker says that it was the couple’s shared love for the business and customers that motivated them to open up shop again.

“I love our customer base,” Tucker says. “I like to interact with them and work with them. They’re just family to me.”

Originally a tire store, the shop expanded their offerings to include auto services such as alignments, oil changes and brakes. With good business on the horizon, the Tuckers further expanded their reach with new locations. But the new additions didn’t end up making it, and they had to retract back to their sole store.

That all took a change when in 2010 with the help of her grandson Joe Oliver, the entrepreneurial family expanded Big T Tire to add a second store with a new focus, Big T Tire and Off-Road. The shop is designed to manage the demand for off-road enthusiasts needs, such as lift kits and performance tires, catering to light truck and SUV customers in the area. Big T Tire and Auto Service stocks around 300 tires while Oliver says that their off-road store stocks around 100.

Today, Oliver manages the employees and day-to-day shop operations at both locations while Tucker focuses on the business and office needs, such as managing paperwork and overseeing shop operations. Oliver says that he’s thankful that his grandfather taught him so much about the business and attributes those lessons to his success today.

“He brought me up in his business the right way,” Oliver says. “I’ve seen other salesmen actually coming in and not even owning a screwdriver or a wrench. So I’m glad when I go out there, that I know what I’m looking for and what I’m doing.”

As far as local competitors go, Tucker isn’t worried. She believes that as long as the shop is offering reasonable prices, they’ll stay competitive.

That said, she and Oliver do see online sales as their greatest threat.

“A big problem we’re facing now is that since the internet doesn’t have sales tax in most cases, it’s a huge disadvantage for us since we have to charge the tax,” Oliver says. “But we have a really good following in here in Columbus and a good name for ourselves.”

Oliver says one of his 85-year-old grandmother’s favorite expressions is “Suck it up, Buttercup.” While you need to be flexible in this industry to satisfy the customer, you also have to be tough in order to survive and succeed, as Tucker has proven over the years.

“Of course every day is rough,” says Oliver. “Some days are better than others, and the market’s changed a lot compared to when I first started in the business at 18 years old…. You’re at the same place every day, but it’s always something different. There’s always something to problem solve.”

Oliver says that his main goal right now is to keep both shops going strong to someday expand outside of Columbus again one day. But for now, the generational team will continue to stay tough and committed to their customers.

Advertisement
In this article:Georgia, independent tire dealers, Proud to be an Independent Tire Dealer