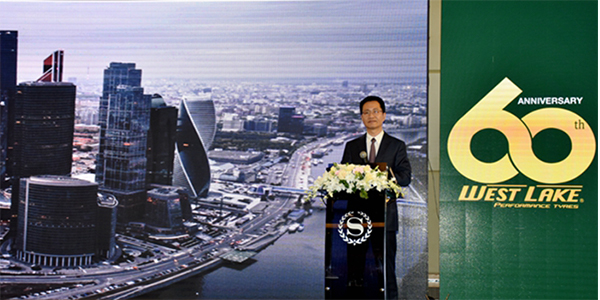 Ge Guorong, vice president of ZC Rubber, shared the company’s 2017 achievements and its 2018 goals at its dealer conference in Bangkok, Thailand.

Ge Guorong, vice president of ZC Rubber, shared the company’s 2017 achievements and its 2018 goals at its dealer meeting in Bangkok, Thailand.

“More Progress More Achievement” was the theme of ZC Rubber’s dealer meeting in Bangkok, Thailand last week, as the company focused on ways to improve its market share in local tire markets.

Ge Guorong, vice president of ZC Rubber, shared the company’s 2017 achievements including how sales revenue has increased by about 22%.

That increase is due to, in part, to a 13.7% expansion of its truck and bus radial tire increasing it to 17.2 million units a year. It also expanded its passenger car and light truck tire production by 20.7% to produce 32.5 million units. ZC Rubber’s bike business revenue also increased to over $30 million with its newly developed SOT tires on Mobike and OFO, two of the most popular bicycle sharing companies in China.

“Our sales of TBR in 2017 hit a historic record ranking as one of the top global manufacturers and the 32.5 million PLT sales include 11 million pcs China sales that ranking as No. 1 in China,” Ge told dealers. “It is great result for us with the effort of all members of ZC family. Thank you for your support and contribution in 2017.”

Ge also emphasized the important role in the company’s global expansion that its factory in Thailand plays. ZC Thailand will help continue to expand product lines as well as the capacity for the global customers. The plant’s motorcycle production is slated to start by the end of 2017 to meet the demands of the Asian markets.

“Expansion of the Auto Space targets ‘Bring Happiness for Stores & Consumers’ and means the improvement of service from tire manufacturer,” Ge said. “ZC Rubber’s Auto Space is devoted to being the professional, reliable, vigorous express service provider to perfect the service for local customers.”

“Wholesales lead to express and low-cost value-added service and platform is more important than operation,” he said. “For the retailers, it would focus on better experience, simple choice and new technology. ZC Rubber will support local dealers on the market expansion and increase the sales profit in the year 2018, to craft a better future together.”

Advertisement
In this article:ZC Rubber