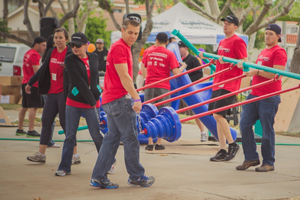 “We’re honored to work with Paul Sullivan and the Sullivan Tire team on this playground build, which will bring kids in Rockland a fun, safe place to play,” said Alan Holtschneider, director of marketing for Yokohama. “Sullivan Tire has been a fixture in the area for more than 60 years and is known for constantly giving back to the community. This new playground will benefit kids and their families for years to come.”

The Rockland Park Department, Town of Rockland, Play Areas for Rockland Kids (P.A.R.K.) and roughly 200 volunteers from the community are also helping build the playground. The park will be built on June 25 at the Hartsuff Park, taking only one day to construct.

Holtschneider said another playground will be built with KaBOOM! in the future, but a date has not yet been announced.

Yokohama signed a three-year multichannel partnership with KaBoom! in March 2015 and will work with the non-profit at the Yokohama Tire LPGA Classic in Prattville, Ala., May 5-8 and charity golf tournament on May 2. All proceeds from the events will fund future playground builds.