Nitto Tire USA Inc. has received notice as what one could call the tire industry’s very own “underdog.” But recently, parent Toyo announced plans to double the Nitto brand sales to $1 billion globally by the year 2016.

Underdogs are fighters, and their passion and drive becomes contagious to those who surround them.  As a society we often expect (hope) for the underdog to be victorious, whether in business or in sports. 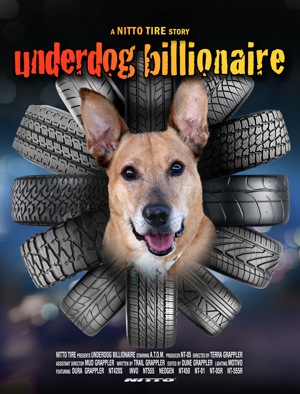 It doesn’t matter if it’s the kid down the street who shows up for baseball practice only to miss on a chance to make the Little League team, but later (somehow, someway) ends up with a scholarship to play college ball and becomes a major leaguer.

Or perhaps it’s a business that blossoms from a simple two-car garage – like Apple – to become a part of our everyday lives.

Hands down, our society loves to root for the underdog.

To properly set the stage for this story, one must look back to 1949 when the company was founded in Japan as an independent tiremaker. Back then, the company mainly exported its tire products – primarily bias ply truck tires and some passenger units – and by the 1960s it was sending tires to the U.S. and the Middle East.

As the company made inroads into the U.S. market – its sales operation began in California, where its headquarters remain to this day – the parent company in Japan faced some very difficult financial years. Even expanding into the U.S. market didn’t stem the hard times. Some would say the company truly started earning its reputation as an underdog after it arrived in the U.S.

It’s no great secret that Nitto flirted with bankruptcy and total collapse more than a few times. Even after Toyo Tire & Rubber Co. acquir­ed the business in 1979 and even into the 1990s, the tiremaker struggled to find an audience, a market and reliable distribution.

In the mid-1980s, the barely surviving Nitto even pulled out of its domestic Japanese market for a short time to regroup. The entire company had annual sales of just $6 million, and carried an inventory of some nine million tires. During those days, Nitto limited itself to selling product only in parts of Asia and the Middle East while trying desperately to establish itself in the U.S.

Enter Tomo Mizutani, who joined Nitto as head of its U.S. sales efforts. Some 28 years later, he remains with the company, now as its global president. But back then, Mitzutani and his Nitto team worked morning-noon-and-night to turn things around.

That meant creating exciting new products and leveraging its name in the hot sport tuner and off-road mar­­kets, signing solid distribution deals and working extensively in non-traditional media to build a brand and reputation. By 2004, buoy­ed by its seemingly supersonic growth in the U.S., Nitto annual sales were well into $100 million.

Now the target goal is much, much bigger.

While visiting Nitto’s new off­ices in Cypress, Calif., one could certainly identify a true sense of pride among the em­ployees. They know all too well that building and establishing the Nitto brand has been a battle, but the victories are more recognizable, more enjoyable each day.

This past June, Nitto and Toyo Tires North America moved into a new headquarter offices in the Los Angeles suburb, just down the street from their old offices.

Nitto has incorporated an office en­vironment and design that is an ex­tension of its management philosophy of sharing, embracing challenges, being a trendsetter and being fair and trustworthy to its customers, according to Mizutani.

At the center of the office is a rubber tree, which he said defines the bare essence of this company and its products. And as you walk down the halls, one would recognize certain themes and vision statements, in­cluding the practice of naming con­ference rooms to remind employees of Nitto’s business philosophy.

As you complete a tour of the building, there is a small gallery of art and photos. One poster, in particular, is a head-turner, but once one takes a moment to study the poster, it defines the company’s theme as it presses forward: “Under­dog Billionaire.”

At the center, surrounded by an array of Nitto tires, is the unofficial company mascot, a mixed breed dog with an attentive, friendly, earnest face. Affectionately named Atom, the dog’s owner is Mizutani. In fact, Atom’s name comes from the production process that Nitto and Toyo use in their White, Ga., tire plant, the highly automated Advanced Tire Operation Module.

As Mizutani describes it, the turning point for Nitto came in 1993 when he met with Hiroaki Ichiki, the owner of a service shop in Yoko­suka, Japan. Ichiki noticed a new trend where young enthusiasts were racing tricked-up Japanese imports, a trend that was spreading from the streets of Japan east to California.

“Whenever enthusiasts start a new trend, tires were always lagging be­hind. Brand name was not a priority; whoever built the right tire would have a hit,” Ichiki told him.

With this knowledge, Mizutani surveyed young driver/racers and asked what kind of tires they were seeking. “They wanted a tire that fit their cars and looked great,” Mizu­tani said. “If Nitto got the size and look right for these tuners, they would jump on it.”

Toyo supported Nitto in this new segment, and engineers developed tires to meet tuner desires. Within three months, the tiremaker created a tire that took the market segment by surprise – not just with the right looking and sized rubber, but that a tiremaker took the time to pay att­ention to this niche group and its unique needs.

“Enthusiasts adore cars. They are the ones we targeted at that time. We keep ahead of trends to develop a tire that enthusiasts look for,” said Mizutani.

When Nitto was ready to tackle the mainstream in the U.S., it foc­used on the Mustang. The tiremaker approach­ed Mustang tuning company Steeda Autosports, looking to gain acceptance by attaching Nitto to a name that fans respected.

After test­ing Nitto tires, Steeda president Dario Orlando was impress­­ed. That led to a comparison test in Mustang magazine, which rated Nitto’s drag radial tire the highest against three competitors.

In 1999, Nitto adopted digital marketing, launching a website the company said was ahead of its competition. While the website and other digital efforts became the core of Nitto’s marketing strategy, the company continued to address the individual markets enthusiasts were adopting.

Such as the lifted light truck market by partnering with AMT Forged Alloys to make tire to fit the company’s larger wheels. And entering the off-road light truck market with the Nitto Mud Grapp­ler, which featured thick, tough sidewalls and a memorable “dino­saur footprint” tread design. From that, Nitto then released a series of desert, all-terrain and on/off road designs.

Recently, parent Toyo announced plans to double the Nitto brand sales to $1 billion globally by the year 2016 – hence the ‘Underdog Billionaire’ rally cry. Even as the Nitto brand has grown elsewhere around the world, Toyo president and CEO Kenji Naka­kura understands that meeting that goal will depend on Nitto’s continued success in the U.S.

“The goal of business is to make a profit,” he said. “But I want Nitto to create products that generate excitement. That’s the company’s mission. Nitto has to be the brand that brings something exceptional to the market.”

Today, Nitto translates its marketing message to consumers via multiple product- and leisure-related websites and heavy use of Facebook and other social media and digital efforts, all focused on generating buzz and positive word-of-mouth.

Just last month, Nitto launched a new luxury-magazine-style website offering “original premium digital content.” The site features a wide-range of stories, from “local stories to some of the most exclusive and exotic automotive destinations in the world.”

A few days later came the official launch of its long-planned Nitto Dea­ler Portal that was developed to help dealers of all size improve operations and educate their staffs and customers.

Currently, Nitto is supplied by six Toyo plants around the globe, in­cluding the U.S. operations in Georgia, and fac­ilities in Kuwana and Sendai, Japan; Zhangjiagang, China; and another in Malaysia from the recently acquired Silverstone Bhd. Tire Co.

Currently, Nitto products are sold in the U.S., Canada, Mexico, the Mid­dle East, Australia and Japan and a handful of other Asian nations, and it plans to enter the European market in 2012-13.

“But let’s not forget,” Mizutani mentioned, “we will always remember that the U.S. allowed us to re-establish our identity. As Nakakura-san says to us, ‘Even though Nitto is a Japanese-owned company with a Japanese name, Nitto was reborn in the United States. And that’s why Nitto’s headquarters will remain in the U.S.’”

With a Billion Dollar Goal, Nitto Retains the 'Underdog' Role