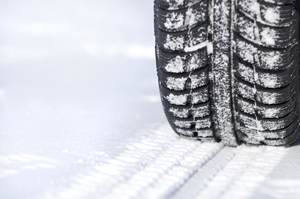 Winter tires have been around since 1934, when Finnish tiremaker Nokian introduced them for trucks. Two years later, Nokian added sizes for passenger cars.

This was during a time when there were still many horses and carts on the roads, and motor vehicles didn’t have today’s handling and braking capabilities. Tires that helped keep trucks and cars under control had a real impact on keeping drivers, pedestrians, and horses safe.

After Nokian introduced its first dedicated winter tire, other manufacturers followed with their own offerings. In the 1960s, studded tires were common offerings from major tire manufacturers. While they certainly helped control in wintry conditions, the noise and road damage studded tires created have reduced their popularity and led to legislation limiting, or prohibiting, their use.

When first introduced, winter tires featured a unique tread design for the time. Most tires up to that point had minimal tread patterns, usually no more than circumferential grooves or “ribs.” The new bias ply snow tires featured a new style that we’d call “knobby” today, with tread blocks designed to help the tire bite into the snow. It offered improved traction in snowy conditions.

The tire industry’s original definition of snow tires was based on the geometry of the tread design. The designation “M+S” was created to differentiate the knobby tires intended for use on muddy or snow-covered roads from straight rib tires.

Unlike recommended practice for modern winter tires, the original snow tires were usually only installed on the rear axle (back then the drive axle of almost all vehicles). Tires with tread designs that meet the industry definition (essentially a measure of the amount of void in the tread pattern) may be branded, still today, with the letters “M” and “S” in several different ways (e.g., M&S, M+S, M/S, MS, etc.) at the discretion of the tire manufacturer.

Radial tires, largely because the radial plies kept the tread pattern more open, also delivered better snow traction than straight rib, bias ply tires. This led tire companies to create radial tires that qualified for the M+S designation and to introduce them as “all-season” tires. These new all-season tires were supported by advertising campaigns that suggested that they offered traction for all seasons, including winter snow. While the idea of an all-in-one tire proved very popular, the geometry-based M+S designation doesn’t guarantee adequate traction on snow or ice.

To help drivers easily identify tires that provide a higher level of snow traction, the Rubber Manufacturers Association (RMA) and the Rubber Association of Canada (RAC) agreed on a performance-based standard for passenger car and light truck winter tires in 1999. A three-peak mountain/snowflake symbol branded on the tire’s sidewall identifies tires that attain a traction index equal to or greater than 110 (compared to a reference tire that is rated 100) during the specified American Society for Testing and Materials traction tests on packed snow.

There are three basic categories of modern winter tires (note that the term is “winter tires,” not “snow tires” because they have evolved to offer performance advantages in all winter conditions). First are the more or less self-explanatory studded winter tires. These have metal studs inserted in the tread to provide maximum grip on ice. Next are studless snow-and-ice tires, which are increasingly popular because they provide the most traction possible without noisy studs that are illegal in many places. The most recent category is performance winter tires. Generally rated for higher speeds (some up to 168 mph), they are offered in lower-profile sizes, and are typically constructed with asymmetrical tread patterns.

Performance winter tires sacrifice some traction on packed snow and ice, but deliver improved performance in mixed conditions, or on the cold, wet, slushy roads.

Given that, in their simplest form, tires are just a mixture of natural rubber, synthetic rubber, polymers, steel belts, fiber belts, binders, silica, carbon black and oils that are mixed and cured in a mold, how do tire manufacturers develop effective winter tires? Engineers look at the inherent conflicts in winter tire development: snow performance, ice performance, handling, wet grip noise and rolling resistance. Then they turn to special technologies that strike a balance among the conflicting demands. These include softer and more flexible tread compounds, the shape of the contact patch, specially designed grooves, advanced sipe technology including complex 3-D sipes, and distinctive tread designs.

Tread compounds all harden as temperatures drop – the compound determines the rate of that hardening. To provide good grip in winter conditions, winter tire compounds are pliable and maintain flexibility in low temperatures. Some compounds even alter their elasticity depending on the level of energy involved – reacting as changing speeds create variations in centrifugal forces and heat.

Compounds with silica offer improved wet performance and have been included in the winter tire offerings from many manufacturers. Some new silica compounds have added exotic materials such as naturally derived carbonic bamboo powder. The bamboo powder helps absorb the water layer that develops between the tire tread and an icy surface. Others use crushed walnut shells incorporated into the tread compound. Walnut shells are among the hardest natural substances in the world and provide added control by scratching into ice.

The design of sipes in modern winter tires is the focus of attention in several areas. Improved sipe designs provide a more efficient wiping effect that decreases the liquid layer between the tread and the road surface. Increased drainage from multi-channel sipe technology removes water from the tread area. Some tires have added shallower sipes to provide extra traction when the tire is new, while 3-D sipes work to maintain wet traction throughout the tire’s life.

Maximum wet grip combined with excellent winter performance on snow and ice appears to be a priority in the design of winter tire treads. Modern winter tires have treads with directional patterns, no circumferential grooves and increased numbers of block edges. They offer improved snow handling due to the increased number of blocks. In many tires, 3-D groove structures act as additional grip edges. Vertical channels guide water flow to the tire’s horizontal drainage system where the water is removed from the contact area by the pattern grooves.

Claw-like features incorporated in some tread designs provide added traction in deep snow while also enhancing block rigidity. The result is an improvement in both wet and ice traction. Recently some manufacturers have added a “buttress” to the tread to help maintain control on rutted winter roads by providing improved feel when traversing in and out of ruts in both snow and slush conditions.

Nokian looks like they’re trying to re-invent the winter tire with a unique stud technology that brings the studs out only when they are needed. With a press of a button, the driver can bring out the studs. When not needed, the studs can be retracted back into the tire.

The idea of the combined non-studded and studded tire is that the driver can make the switch as conditions change. On dry or merely wet roads, the studs remain retracted, but they can quickly be activated in icy weather. The studs on all four tires raise and lower at the same time. The body of the stud remains in place, and the moving part is a hard metal pin in the middle of the stud.

Coming from a different direction are the new “all-weather” tires now appearing in Canada. The rationale for the all-weather offerings sounds a lot like the original arguments for all-season tires. However, proponents say they are a proper winter tire as well as a superior summer tire. They claim the all-weather is what the all-season wanted to be, before it became a cliché. It’s probably not surprising that Nokian has pioneered this new class of tires.

Unlike all-season tires, all-weather tires carry the three-peak mountain/snow flake pictograph. All-weathers are typically a bit noisier than all-seasons and, since the passenger car sizes often have higher speed ratings, ride may suffer. Although this class of tires can handle most winter conditions, even their advocates say that if you are the one driving to the snowplow to clear the highways, you may still need dedicated winter tires.

Maybe it’s time for more tire companies to start producing all-weather tires, but in any event, it is clear that winter tires have improved tremendously and will keep getting better. The funding for winter tire research and development is considerable and seems unlikely to change significantly in the immediate future. Let it snow, let it snow.