There was a time when rubber belts were maintenance items that had to be replaced every five or six years, depending on their condition. 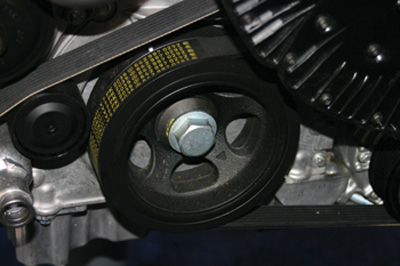 The original equipment belts on today’s late-model vehicles are mostly made of EPDM (ethylene propylene diene monomer), a synthetic rubber that is far more durable, heat-resistant and wear-resistant than Neoprene. This means serpentine belts made of EPDM may last up to 100,000 miles or more before they have to be replaced. But this doesn’t mean they will last forever.

A serpentine belt that’s aging or slipping may develop a hard glazed surface that makes the belt noisy. Aerosol belt treatments may quiet the noise for a while, but sooner or later you’ll have to replace your customer’s belt.

The appearance of surface cracks in the rubber is another clue that a belt is reaching the end of the road and should be replaced — the sooner the better because a belt failure will result in a breakdown (loss of engine cooling, A/C cooling, charging output and power steering assist).

Belt noise and/or premature wear are often the results of a bad automatic tensioner. Customers should be advised to check their belt tensioner if a serpentine belt is making noise, slipping or fluttering when the engine is revved.

High-mileage tensioners often have weak springs and can stick if there is corrosion in the pivot bearing. A special tool is then needed to rotate the tensioner so the belt can be replaced.

Can’t find the automatic belt tensioner? Some late-model engines don’t have one. Instead, they use a new type of “Stretch Fit” serpentine belt. Such belts have special polyamide tension cords inside that allow the belt to stretch slightly (like a rubber band), but in a controlled way so belt tension is maintained without the need of a tensioner. Ordinary serpentine belts do not stretch, and must use a tensioner or have some type of adjustments on the belt-driven accessories.

Though ordinary replacement serpentine belts must be the exact same length as the original to fit properly, stretch fit belts are actually slightly shorter than the original belt. Installation requires routing the belt around all of the pulleys, then stretching it over the last pulley with a special tool.

Something else that’s new is the use of overrunning alternator decouplers (OAD) on a growing number of late-model vehicles, including Chevrolet Corvette, Camaro and HHR, Buick Lucerne, Cadillac CTS and Escalade, Volvo XC60 and XC90, and various Lexus, Scion and Toyota models.

OADs (also referred to as isolating decoupler pulleys, or IDPs) help enhance engine efficiency and reduce noise, vibration and harshness. Using any other type of replacement pulley on an alternator, such as a one-way clutch, isolating pulley or solid pulley, on an application that came originally equipped with an OAD pulley can lead to customer complaints about noise and vibration, as well as premature belt failure.

Finding a Failing Belt
Most belts fail from the inside-out. Belts deteriorate with heat and mileage. Every time a belt passes around a pulley, it bends and flexes. This produces heat in the belt, which hardens the rubber over time. The wear process can be greatly accelerated if the belt is loose and slips. The additional friction between the belt and pulley will make a belt run even hotter.

After millions of such journeys around the pulleys, even the best drive belt begins to suffer the effects of age. The rubber begins to crack and fray, and the internal cords become weakened and brittle. Eventually the belt breaks, and at that point, all cooling is lost along with whatever other functions were powered by the belt.

You can’t always determine a belt’s true condition by appearances alone. Any belt that is obviously cracked and frayed should be replaced. But with many of today’s “bandless” belts, there is no outside cover to peel loose and betray the belt’s deteriorated condition. A belt may appear to be like new on the outside, yet be on the verge of failure because of weakened cords inside.

Contaminants in the drive system will cause belt damage and premature wear. So make sure the grooves are clean and not fouled with dust, dirt, grease, rocks, etc.

Small and packed debris will prevent the belt from properly seating in the groove and detract from power transmission capability. Fix all lubricant and coolant leaks. Lubricants will reduce the coefficient of friction between the belt and pulley, inducing belt slippage, and eventually will attack the rubber compound. Coolant increases the potential for the belt to make noise.

Also, look for any glazing (shine) on the underside of the belt, which indicates that the belt has been slipping. A slipping belt is bad news for a vehicle’s belt drive system.

Remember, some cracks on the underside of a serpentine belt are normal with age. But with EPDM constructed belts, if more than three cracks are counted in a 3” section on any one rib, the belt has already used 80% of its intended life, and should be replaced.

Why Aftermarket Belts are Lasting Longer