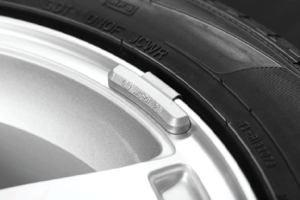 The industry weighs in on wheel weight options and legislation.

The future of lead wheel weights in the U.S. remains as clear as mud. For all the obvious reasons the industry should shift to steel, zinc or other weight materials, state and federal governments seem to be in no hurry.

The federal government in particular has been slow to adopt legislation or regulations that would make the manufacturing, distribution, selling and servicing lead wheel weights illegal.

“The EPA accepted a petition in 2009, and for a while they had a proposed rule that was scheduled for publication in sometime between 2011 and 2012 and we still haven’t seen it,” says John Gilkeson, principal planner for toxic reductions at the Minnesota Pollution Control Agency. “I’ve personally tried to contact a number of people at EPA to find out what’s going on. I can’t get an answer.”

Without EPA action, the management of lead vehicle component bans has fallen back onto states. California, Washington, Maine, Illinois, New York and Vermont were the first states to ban lead wheel weights. Minne­sota, earlier this year, proposed a similar ban.

The Minnesota bill is expected to pass, according to Gilkeson, who notes that the legislation was drafted to mirror the language used in other state’s bans. Both the House and Senate bills are now waiting for votes on the floor and, then, reconciliation to arrive at a final law.

The proposed Minnesota law includes a ban on lead wheel weights as well as language that mandates that lead materials should be “recycled or otherwise managed … to ensure that they do not become part of the solid waste stream and not released to the environment.” Both bills have pushed back their proposed effective date to mid-2015 at the earliest.

The state-by-state introduction of legislation works fine, but without federal law, the shift to lead-free alternatives will remain slow. In 2005, the European Union enacted the End of Life Vehicle Directive – a ban on the use of lead in vehicles sold in Europe. That became the jumping in point for North American vehicle manufacturers to make the switch to lead-free. By 2010, all North American OEMs had made the switch to lead-free wheel weights.

In the aftermarket, that change was reflected somewhat with large national retailers and large independent tire dealers making the switch. Still, manufacturers such as Hennessy Industries Inc. and Wegmann Automotive USA Inc. estimate that the industry is still around half lead and half non-lead.

Scott Flynn, director of sales at Plombco Wheel Balancing Products, notes that the manufacturer was closer to 60% non-lead, 40% lead.

Weight manufacturers and distributors alike agree that a complete ban on lead wheel weights would be beneficial to everyone. It would allow producers to focus on making only one product; distributors could reduce their stock levels; and any national companies would have to worry about only one set of laws.

As it is now, those states that deal with the issue still may have different penalties for violations. Naturally, multi-state, national dealers and tire outlets are looking for consistent regulation, but since national legislation doesn’t appear to be forthcoming, the battle is now state-by-state.

But dealers don’t need to wait for regulation; many have already taken action. “Legislation certainly plays a role in overall market awareness and it forces those inside a regulated area to make the transition,” says Gregory Parker, marketing manager at Wegmann. “Many tire retailers, large and small, are leading the charge and making the switch even though they are located in non-regulated states.”

Tire retailers may lead the charge, but according to Hennessy’s Kevin Keefe, wheel weight manufacturers are hesitant to make the complete shift without a safety net.

“We’re really going to need additional legislation to get us there,” says Keefe, vice president of marketing for Hennessy, maker of Bada weights. “As long as there are other companies outside of lead-free jurisdictions that are willing to supply lead weights, it puts the whole endeavor at risk. We would need some over-arching legislation that would preclude the import of lead wheel weights and a staged, orderly but timely transition plan to get the industry shifted.”

Without that safety net, wheel weight manufacturers have no incentive to make the complete switch unless the market exclusively demanded non-lead wheel weights.

“As a national distributor, we’re tasked with stocking both products, lead and non-lead alternatives, since we are distributing in all areas of the country,” according to Larry Edgell, marketing manager at Myers Tire Supply. “As long as customers are using lead wheel weights and there isn’t legislation in that certain area, we’ll continue to offer what the customer’s using and requesting.”

Customers continue to seek lead wheel weights for many reasons – chief among them is that many just don’t realize what they are receiving. Lead wheel weights are toxic to humans, fish and wildlife. Once they fall off vehicles into roadways, they erode and emit lead dust that contaminates soil and waterways.

Secondly, lead wheel weights are typically cheaper, and for such an item, there is no brand knowledge in a consumer’s eye. Price is very important in the sale to the tire outlet.

“When the transition from lead to non-lead clip-on weights started, non-lead wheel weights were nearly double the cost of a lead weight,” says Plombco’s Flynn. “So, it didn’t really make sense from an economic standpoint for a tire dealer to switch over if they didn’t have to.”

Both have drawbacks in that they aren’t as malleable as lead so tire techs can’t shape the weights to better fit the wheel.

“The correct application is always important, no matter if you’re using lead weights or a non-lead product,” says Flynn. “But because of the malleability and workability of a lead weight, you are more likely to be able to cut corners and still be successful with the weights staying on the wheel. With a non-lead product, using the proper weight and the proper application is key to making any of the products work properly.”

The alternative materials are all slightly more expensive than lead. Pricing has come within $1 and change per vehicle, says Keefe of Hennessy.

“As time has passed, some wheel weight manufacturers have made significant investments to increase capacity, thus lowering the cost to the market,” notes Wegmann’s Parker. “Today you can find non-lead offerings that are equal to or only slightly higher than lead-based pricing.”

Plombco now offers a plastic and steel wheel weight product named Plasteel, which the company says will actually save the tire outlet money.

“You can spend approximately 10% less on your clip-on wheel weights with the Plasteel product than you could with the lead product,” claims Flynn.

The combination of legislation and products that are more cost-competitive could be the push the industry needs to make the complete switch to lead-free wheel weights. That would be a victory for manufacturers.

“We manufacturers don’t all agree on everything but one thing we all agree on in the industry is that sitting where we sit right now, at 50% lead, 50% lead-free, is about the worst place we could be from a cost perspective,” says Hennessy’s Keefe. “The wheel weight piece market hasn’t grown substantially over the last 10 years and we’ve all invested in a separate, additional manufacturing process.” 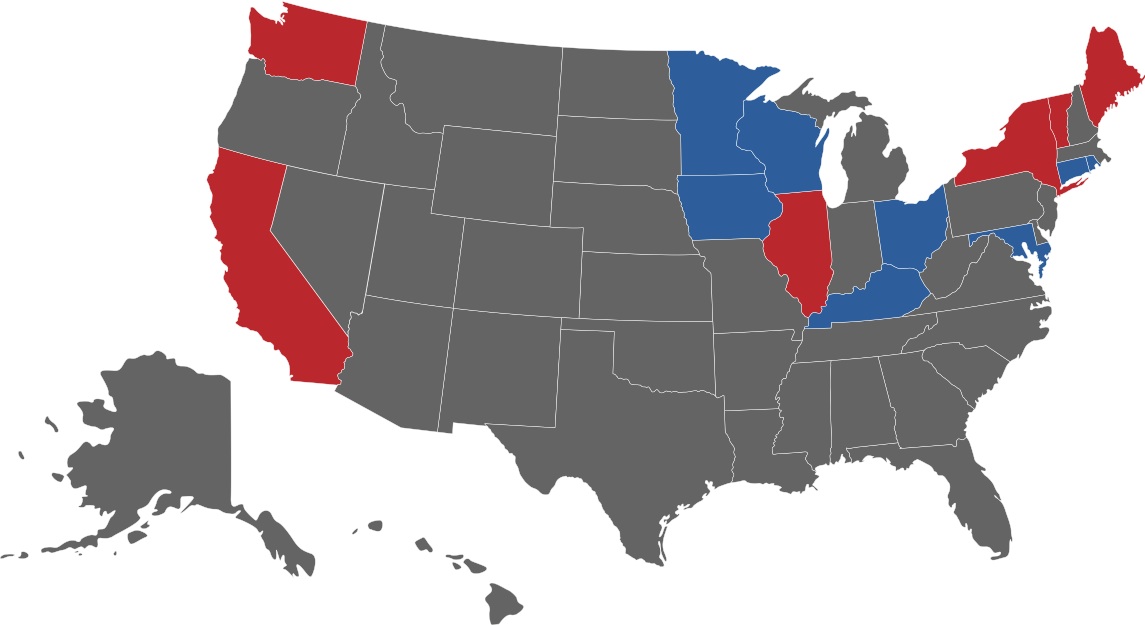 Six states (in red) have taken legislative action against lead wheel weights. A state-by-state approach will leave dealers and drivers with potentially unique solutions at the same problem.

If they are making the switch to lead-free weights, tire dealers should move slowly and with a plan. If you’re in a state with legislation on the table, work with your suppliers on an introduction plan lead-free alternatives. Then, begin training employees on the differences between the two products.

“Don’t try to make the switch wholesale, every style,” says Keefe. “Pick a style or two at a time and make the transition. Work through any potential angst and then keep moving through the rest of your line.”

Tire dealers in states without proposed legislation have the ability to make the switch more strategically. Distributors and manufacturers will communicate with dealers in when legislation is being considered.

“By being pro-active and getting ahead of the curve, you give yourself ample time to test the non-lead options available in your market, which is key,” notes Wegmann’s Parker.

Historically, lead wheel weights have been recycled. When lead and steel were the only two metals in a wheel weight, the lead could be melted down and used for battery manufacturing while the steel clips were removed and recycled otherwise. Today, with full steel weights and those with plastic and zinc, a tire dealer’s recycle bucket makes it very difficult for recyclers to work.

“Recycling has become more of a challenge. OE vehicles are coming with non-lead alternatives that cannot be mixed with lead in the traditional recycling process,” says Myers’ Edgell.

To address the problem, all major wheel weight manufacturers have partnered with recyclers that can handle mixed media wheel weights.

“We try to assist with ways that the weights can be handled locally,” continues Edgell. “In our case, we work primarily with Bada and Wegmann to come up with the best programs that they offer.”

“We feel it’s our responsibility to deal with these mixed metals, even though it’s a difficult task,” remarks Keefe. “We offer a program that gives you assurance that the metals have been recycled in an environmentally responsible way and that they actually end up back in the products you use every day.”

When (If) Lead Is Banned

Repair vs. Replace: Your Checklist for Tire Equipment