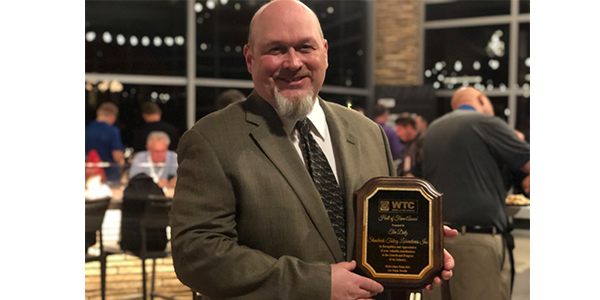 Tim Dietz, quality manager/technical sales for Standards Testing Labs, was inducted into the Wheel & Tire Council’s Hall of Fame for his 20 years of service to the council.

SEMA’s Wheel & Tire Council inducted a new member into its Hall of Fame Tuesday at its reception at the Renaissance Hotel Las Vegas during the 2019 SEMA Show.

Tim Dietz, quality manager/technical sales for Standards Testing Labs, was honored at the event for his 20 years of service to the council.

Dietz, an Ohio native, worked his way up through the ranks at Standards Testing Labs, an independent testing facility for tires, wheels and related automotive components located in Massillon, Ohio. He started at the company in 1989 as a test coordinator and worked his way up through the ranks, he said. In addition to serving as chairman of the Wheel & Tire Council, Dietz has also been involved on the council’s many boards including its standards committee, government affairs committee and chairing its science and technology committee.

When asked about what he enjoys most about his position and being part of the industry, Deitz said, “We test [tires, wheels and automotive components] for all kinds of people, and I get to help small companies bring their product to market. We provide a service that makes tires safe, and I get to be a part of that…I get to create tests, write test standards, and we really steer the industry.”