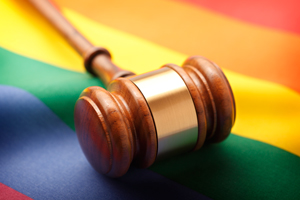 In order to understand the issues, we first need to define the terms. According to the American Psychological Association, sex is defined as one’s biological status as either male or female, which is primarily associated with physical attributes. Gender refers to the socially constructed roles, behaviors, activities, and attributes that a given society considers appropriate for boys and men or girls and women. Gender Identity is a person’s own internal sense of gender, and it may differ from biological sex. Gender Expression is defined as how a person communicates gender identity through clothing, behavior, hairstyle or other means. Transgender is an umbrella term for persons whose gender identity, gender expression or behavior does not conform to that typically associated with the sex to which they were assigned at birth.  Transsexual is a person whose gender identity is different than their sex.

While a larger spectrum exists, the existing cases most frequently discuss LGBT employees, so that’s where our focus will be in this article.

However, two cases started a change in doctrine: Price Waterhouse v. Hopkins (1989) and Oncale v. Sundowner Offshore Services, Inc. (1998).  In Price Waterhouse, a female candidate who was refused admission as partner in her accounting firm brought a sex discrimination suit against the firm. There was plenty of evidence that the candidate was told she could improve her chances at becoming partner if she would take a charm course and “walk more femininely, talk more femininely, dress more femininely, wear make-up, have her hair styled, and wear jewelry.” The Supreme Court found that sex stereotyping played a part in evaluating plaintiff for the promotion, and that such behavior constitutes impermissible sex discrimination under Title VII.  Similarly, in Oncale, the Supreme Court heard a case where an oil rig worker (who was not gay) sued his employer for harassment, threats of rape and sexually suggestive humiliation by his co-workers. The worker ultimately quit his job because the employer didn’t address his complaints and he was afraid for his physical safety. The Supreme Court held that sex discrimination consisting of same-sex sexual harassment is prohibited under Title VII.

Since these cases, other courts nationwide have made decisions along those same lines. In 2004 in Smith v. City of Salem, Ohio, the Sixth Circuit held that an employee’s claims that he was discriminated against based upon gender non-conforming behavior and appearance (not being “masculine enough”) were actionable under Title VII. In Obergefell v. Hodges, the Supreme Court held marriage is a fundamental right, and states must allow and recognize same-sex marriages performed in other states. Further, there have been several well-publicized settlements of more than $100,000 for cases involving transgender employees who were discriminated against or fired when they began to present as the opposite gender.

Beyond federal laws, there are also state laws and local ordinances that may affect employers.  For example, more than 20 states ban discrimination on the basis of sexual orientation and/or gender identity in some form. Consult with your attorney to see what laws may apply to you, as the prohibited conduct varies widely. There are also additional rules for federal employees and government contractors.

So how should an employer address questions related to things like restroom use, employees transitioning genders while employed, benefits and insurance coverage? Again, keep in mind that there is currently no clear federal law specifically defining LGBT as a protected status.  However, the trend is clear and savvy employers may want to take proactive steps to guard against future discrimination or harassment claims.

One step is to analyze your current workforce to see if any hiring or pay biases may exist. One university study suggests that a fictitious applicant whose social media account reflected he is Muslim may receive fewer interviews in socially conservative states than an identical fictitious Christian candidate – is that happening in your workforce with LGBT applicants? Further, you may want to review and work to eliminate any pay gaps or disparities apparent for members of any protected class, including LGBT employees and women.

Another important step is review your non-discrimination and non-harassment policies to assess whether sexual orientation is included as a protected status and whether you want to add it. As always, a good policy is written in clear, easily understood language that provides for a complaint and investigation procedure if an employee feels that he or she has been discriminated against or harassed by a co-worker, supervisor, customer or anyone else. It should also set forth the consequences of such actions and prohibit retaliation for any good-faith complaints or assistance in an investigation.

You also may want to proactively create a diversity policy and a policy regarding the protocol for an employee transitioning between genders. If your management and workforce is aware of these policies and has received advance training on them, when the situation arises there’s less potential for confusion and missteps.

As to a dress code, employers may require adherence to reasonable workplace appearance, grooming and dress standards. However, gender-specific differences in the dress code tend to be a bad idea, unless that requirement is somehow related to the duties of the position.

In general, it’s a good practice to treat an employee consistently with his/her stated gender identity. That may require you to update benefits paperwork, preferences in your employee tracking software or signature blocks. Keep in mind that something you may take for granted or view as unimportant can have potentially huge consequences. For example, the EEOC has taken the position that denying an employee the use of a restroom consistent with his/her gender identity and the use of the incorrect pronoun to describe that employee is evidence of discrimination under Title VII.

While it is impossible to insulate yourself against all risk, good policies and practices will go a long way toward making the workplace safe and productive for all employees.

Advertisement
In this article:employees, legal, regulations, You & the Law, You and the Law

What Employers of LGBT Employees Need to Know