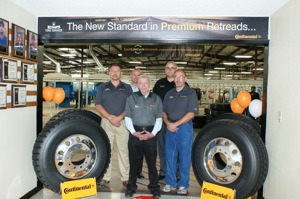 What started as a small family business is now garnering national attention as King’s Tire formally cut the ribbon on its reopened and all-new 25,000-square-foot retread tire facility as the first U.S. licensee of CTA’s ContiLifeCycle retread system.

The grand re-opening happened on Sept. 23, with owner Sam King and his two sons, Matt and Ed, now producing ContiLifeCycle retreaded tires – the first produced in the U.S. from flat precure tread stock featuring the same tread pattern designs, rubber compounding and tread technology that you would find in all-new Continental truck tires. The ContiTread products will be supplied by Continental’s tread production facility in Morelia, Mexico.

King’s retread facility in Bluefield employs 16 personnel and has an annual capacity of up to 60,000 ContiTread truck tires from its two curing chambers. King’s customers include more than 100 fleets, according to Ed King, and a high percentage of those fleets are severe service operations.

Since King’s facilities sit in the center of West Virginia’s mining business, “we have to satisfy our severe service fleets and if we can do that then we’ll certainly be able to handle any other kind of retread application for a truck fleet,” said Ed King, who heads up the retread side of King’s business.

“When we decided to move forward with the ContiLifeCycle system, we had a short window of opportunity to get the system up and running. Since we were changing over systems, it was critical to be up and running as soon as possible so we didn’t leave our customers stranded. Continental really stepped up to the plate. They offered us options and left the decisions to us. They have truly been complete business partners,” he said.

During the opening ceremonies, surrounded by friends, fleet customers, local businesses, support personnel from Continental and state officials, as well as business officials from Brazil and Salt Lake City, Utah, Continental’s executive vice president for truck tires in the Americas, Paul Williams, said, “King’s Tire’s decision to become a licensee represents an important milestone in Continental’s effort to sell premium retreaded truck tires that match its portfolio of new products across the U.S.”

“We’re excited to be the first licensed Continental retread facility in the country,” said Matt King. “We do enjoy the challenge and this is very exciting. We had to think about this for many months before making the decision. We’ve been in the retread business for over 10 years and when Continental approached us, we thought it was a great opportunity.” 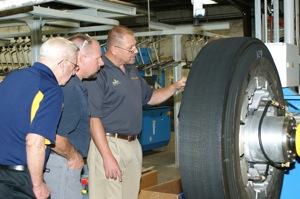 With the new partnership, King said the company has been able to provide more diverse training to employees and is now looking to expand the company even further.

“We were able to add more versatility to the jobs we have here,” Matt King said. “It makes our company more marketable. Continental has allowed our company to grow significantly. When my father first built the company, no one in the family had any idea that King Tire would experience such growth. Dad started out over 40 years ago with two employees. He had less than $100 in his pocket and it was very much a day-to-day, tire-to-tire thing. It’s truly astonishing to see what he has accomplished.”

Greater Bluefield Chamber of Comm-erce Executive Direc-tor Marc Meachum said the new partnership is a testament to economic growth and ingenuity in the area.

Clif Armstrong, director of marketing for CTA, said the company chose to open its first American retread facility in Mercer County because they were impressed with King’s Tire. “We wanted to find a company that would be a good location for our first retread facility and King’s Tire is a great match,” Armstrong said. “The King family is very unique. They built this company from the ground up. This is King’s Tire’s business and all Continental does is support them. This partnership will help Continental develop the type of tires needed on the many coal trucks that work in the area.

“This particular dealership has a lot to offer that the coal industry requires,” Armstrong said. “Coal haulers are extremely tough on tires, especially since coal dust and coal ash are so abrasive. What we are doing with King is designing a product just for the coal market in this area. We are working on manual treads and retreads that the coal haulers prefer. King’s Tire is the poster child for the kind of retreader we are looking for, they dominate in this market.”

Continental’s Williams hopes to use King’s Tire as a launching pad for future facilities across the U.S. and Canada, as well as South America. Williams said he is willing to take time to find the right kind of dealer that makes the right fit for both parties.

“Currently, we’re talking to 10 to 12 prospective customers. We want to be very careful as to who we choose. It’s a two-way decision and it takes time to find the right partner. In this case with King Tire, we selected each other and once we all got serious, the process from start to finish came about very quickly, considering that we started back in the April and May time frame of 2011.”

In the end, it always comes down to the customer’s needs and King’s Tire is recognized by its customers as a premier provider of commercial truck tires, both new and retreads. So it wasn’t surprising to see Kevin Weiss, president and owner of Weiss Trucking Inc., Princeton, W. Va., in attendance to check out the ContiLifeCycle retreading system.

“One hundred percent of my tire needs come from King’s and if my tires aren’t right then my trucks aren’t rolling,” he said. “To what I can see, my 10 trucks and 25 trailers are in good hands.”

Getting to the Bottom of the Case: Assessing Casing Quality for More Retreads, More Profit
Connect with us