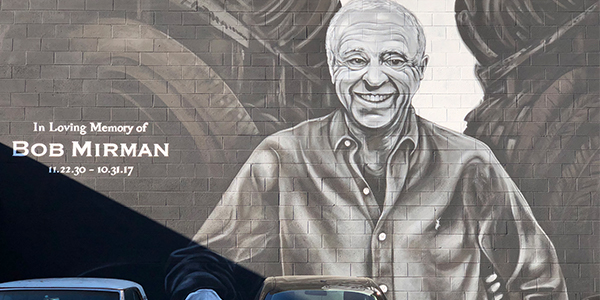 A mural of former West Coast Tire Pros Owner Bob Mirman was painted at his store on Pontius Avenue in Los Angeles.

“I think it’s nice for them to see he still around,” said Tom Eisenberg, the fifth generation owner of West Coast Tire Pros and Mirman’s grandson, about a mural of his grandfather he commissioned a local to paint.

Eisenberg, who has worked in his grandfather’s shop in west Los Angeles since he was 16, said after his grandfather died, it was hard to come into the shop without him there.

So, he decided to honor him with a mural on his shop’s building. He commissioned artist and friend, DJ Neff of L.A.’s Mar Vista Art Sept., to paint the wall-size mural using a picture of his grandfather with tires in the background.

“He’s been here since 1970 and came in six days a week, so I would be with him six days a week… (That was) for nine years,” Eisenberg said. “Now I get to see him everyday.”

Mirman, a Marine Corps veteran, gained a reputation among west coast tire dealers when he opened 90 locations of White Front Tires in five states, according to his obituary. He eventually sold the tire store chain, and in the late 1960s, he retired. But that lasted for just one year.

He came out of retirement and founded West Coast Tire Pros in 1970. The shop started as a tire warehouse. Now, it boasts 17 bays and offers comprehensive auto care from tire services to auto body work and engine repair and maintenance.

Since he semi-retired in 2016, Mirman had been involved with his son, Brad, in the charity, Dive Warriors, which teaches disabled veterans to scuba dive and takes them on monthly excursions.

Eisenberg said tire dealers have reached out to him saying how Mirman was a “pioneer” for west coast independent tire dealers.

“It’s nice to talk to other owners who hold him in such high regard,” Eisenberg said. “He wasn’t just my hero; he was mentor to a lot of people in the industry.”

Apollo, Tyromer Partner to use Recycled Tire Material
Connect with us