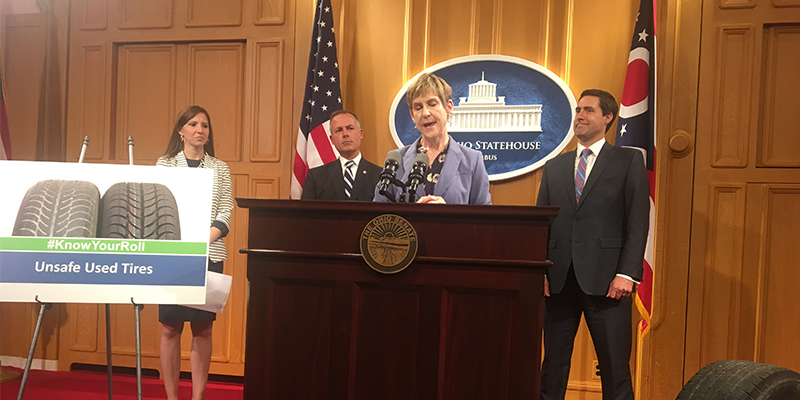 The U.S. Tire Manufacturers Association joined Ohio state legislators Tuesday morning to urge the Ohio House to support a bill that would prevent the installation of unsafe used tires on Ohio vehicles.

It’s no secret that unsafe used tires put consumers in danger and many tire dealers’ reputations at risk.

And to promote that message during National Tire Safety Week, The U.S. Tire Manufacturers Association joined Ohio state legislators Tuesday morning to support a bill that would prevent the installation of unsafe used tires on Ohio vehicles.

“All too often, unsafe, worn out tires contribute to traffic injuries or even fatalities,” said Anne Forristall Luke, president and CEO of USTMA. “Ohio really is the cradle of the tire manufacturing industry in the United States…therefore, Ohio should be a leader in this initiative to ensure consumer safety from unsafe used tires.”

Ohio Sen. Frank LaRose and Rep. Robert Sprague, both sponsors of the bill, joined in urging the Ohio House to pass S.B. 223 and promote proper tire care and maintenance.

“Safe used tires are fine to install on a car,“ said LaRose, whose district includes Akron, Ohio-based Goodyear Tire & Rubber Co. “What’s not fine is taking a tire that you know is not safe to put on someone’s car and sending them out on the road to potentially risk their lives and the lives of other motorists. If it’s illegal to drive on, it should be illegal to install in the state of Ohio and that’s simply what our piece of legislation does.”

As LaRose and Sprague made clear, the bill doesn’t ban all used tires. It targets ones that have specific, well-established unsafe conditions. Those include tires that have:

Under the bill, those who install an unsafe used tire would face a fine of no more than $1,000 and be charged with a second-degree misdemeanor at minimum.

Sprague, who represents the Findley, Ohio-area where Cooper Tire & Rubber Co. is located, said during a meeting with tire dealers on the bill, he received overwhelming support.

“One of the tire dealers that we thought was going to be opposed to this bill spoke up and said ‘you know, I wouldn’t sell a single one of my customers a tire that had any single one of those problems because I have my reputation to uphold. In fact, I guarantee my tires for 6 months, and I would not put that tire on anybody’s car,’” Sprague recalled from the meeting. “That’s how we ended up getting that bill out of (the House) committee… because the tire dealers said we do not want to be installing these tires.”

According to the National Highway Traffic Safety Administration, worn out tires are three times more likely to be involved in a crash than tires with a sufficient tread depth. In 2016, more than 700 fatalities were attributed to tire-related causes.

“This is not something that’s happening in reputable stores in the state. Ohio’s tire retailers are doing the right thing installing safe tires on people’s cars. Under this bill, they can continue to do so even with used tires,” LaRose said. “This is about consumer safety.”

The bill, which was introduced last September, passed the Ohio Senate in December almost unanimously. It has passed through a committee in the House and is awaiting a vote before the full House.

For around six years, USTMA has worked with states to pass legislation banning the installation of unsafe used tires.