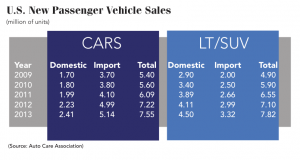 Forecasting consumer tire demand with a finger to the wind is one way to assess our world. But, we offer this alternative assessment as a perhaps less fretful means by discussing the real-world economic outlook, new vehicle sales, manufacturers’ demand outlooks, the potential Chinese tariff and tire pricing.

So let’s start at the beginning…

Longer term, U.S. real GDP con­sensus growth forecast is in the 2.5% to 3.0% range annually for the next couple of years, an acceleration rel­a­tive to the 2010-13 period and a pos­itive indicator for tire demand as we view the tire industry as a GDP-tied growth business.

For reference, consumer replace­ment tire shipments grew approx­imately 1.5% annually during the 2010-13 timeframe vs. the est­imated 2.0% real GDP growth. Add- ­itionally, disposable income for consumers is projected to increase at a growth rate similar to real GDP, or around 3.0%, over the next few years, while the reported national unemp­loyment range appears likely to remain stable at around 6%.

Additionally, our positive underlying outlook for new vehicle sales in the U.S. further supports our somewhat positive longer-term outlook for consumer retail tire demand. We believe U.S. light vehicle sales could increase by as much as 15% to slightly over 18 million units per annum within the next few years, driven by pent up demand.

Historically, sales have rebounded to 15%-20% above trendline following a downturn, suggesting sales could ultimately increase to as high as the 18 million-plus unit range, or about 15% from the current year-to-date seasonally adjusted rate of 16.1 million cars, SUVs and pickup trucks.

While underlying automotive prod­uction is not a perfect comparison to light vehicle sales given import/export dynamics, IHS Automotive has a fairly consistent view with our outlook and predicts underlying light vehicle pro­duction growth in North America to increase 14% from 2013 to 2020.

Overall, the timing of the potential peak remains uncertain, but an inc­rease of one to two million units per year since bottoming out in 2009 suggests that the next few years of growth in the low single digits is a reasonable expectation. As a result of rising automotive demand, we anticipate sustainable growth in replacement consumer tire demand.

Tire manufacturers are also op­timistic on the longer-term tire demand outlook. Goodyear forecasts developed market consumer tire demand at about a 1% annual growth rate through 2018, led by the premium market segment, which is approxi­mately 20% of the industry mix.

The Akron tiremaker forecasts the premium segment to exceed the underlying market growth by about two times, which, coincidentally, is supportive of a favorable product mix outlook for tire retailers as the price of a premium tire is some 25% higher than a mid-tier/average tire.

Another large manufacturer, Cont­inental, anticipates an estimated 4% annual growth rate for the global consumer replacement tire market during the 2013-18 timeframe and a 2% rate annually for the North Am­er­ican region.

Additionally, the company forecasts the share of SUVs and pickups to remain stable in the replacement market at around 50% share during the next five years, which is positive for tire dealer mix going forward.

Mid-term, during the next several quarters, we could begin to see another deferral cycle in the U.S. tire market. Our main concern mid-term is a higher price potential stemming from the possible implementation of new – and more significant – additional tariffs on China-produced consumer tires imported into the U.S. and the additional threat of higher raw material costs. Combined, these could limit the industry growth rate as affordability of consumer tires could be significantly reduced.

Synthetic rubber pricing has inc­reased about 50% since its low at year-end 2013, only partially offset by lower-priced natural rubber. An ant­icipated increase in SBR and NR pricing is likely to cause increased stocking and inflated inventories in the second half of this year, and these elevated inventory levels could cause erratic order patterns in 2015.

Additionally, a Chinese-tire tariff and a rise in raw material costs (parti­cularly SBR) are likely to put upward pressure on dealer cost-of-goods over the next several quarters and well into 2015.

Near term, U.S. tire demand ap­pears resilient and we could even see artificially strong import demand in the second half of 2014, driven cer­tainly by the potential of new tariffs on imported Chinese passenger and light truck tires.

I have already heard from several tire dealers who have placed larger orders for China-prod­uced tires, and certainly others are looking at supply options from other countries. This will likely cause a stockpile of inventories ahead of pricing increases.

U.S. tire retailers have enjoyed a gradual climb in consumer tire demand during the past several years, and we believe the trend continues to head in the right direction.

KeyBanc Capital Markets Inc.’s proprietary survey of U.S. tire dealers showed a mid-single-digit increase in retail demand in 2013, and year-to-date through June 2014 we have seen a mod­eration in the growth rate to about 3%, slightly below the shipment growth rate of 4.5%, as reported by the RMA.

Leading indicators such as miles driven have not shown a tight correlation with the industry demand, in our view. For example, miles driven in the past 18 months are up modestly, but tire shipments in the replacement market are up 5.1% in total year-to-date (includes P-metric, LT-metric and medium-/heavy-duty truck tire shipments).

That being said, positive miles-driven data is still encouraging to see in the near term. From January through June this year, consumer replacement tire shipments in the U.S. market are up 4.6% year-over-year, as reported by the RMA.

Relative to “normal times,” first half 2014 U.S. consumer replacement tire demand of 114.3 million units is trending above historical demand, and we estimate first half average demand from 2000-07 period at 110.7 million tires. The last time the U.S. tire market saw this level of shipment activity was in the first half of 2008!