Perhaps ending all speculation on the future of the Obama Administration’s tariff on imported China-made consumer tires, the USW said yesterday that the added tariff was no longer 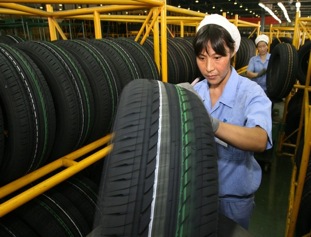 It was the USW that pressed the Administration for the Section 421 tariff – a three-year tiered additional tariff that kicked in on Sept. 26, 2009 – supposedly to protect American tire worker jobs and even add production here.

The USW proclamation – presented under the headline “USW Acclaim Success of Trade Relief for Tire Sector; Extension Not Requested” – came a week after the Obama Administration threw the USW, the Teamsters and the United Auto Workers a bone by pressing for a World Trade Organization investigation of China’s auto and auto part exports. Both trade groups immediately endorsed the policy move.

In its statement yesterday, the USW said: “Under the statute, the Steelworkers had the right to request an extension of the relief up to six months in advance of its expiration. In March, in advance of the six month renewal request deadline, the USW indicated to the Administration that such a request would not be made.”

According to USW president Leo Gerard, "Since the Administration’s decision (to place the tariff), by every measure, success has been achieved: jobs have been retained and created, production has rebounded, investments in plant and equipment have been made and many companies have returned to profitability. That’s why the law was enacted, and it worked.

"In March, the USW notified the Administration that we would not be making an extension request. Under an unacceptable, but existing, provision of international trade law, compensation for a fourth year of relief might have had to be paid to China. We refused to pursue an option that could potentially reward China for their actions,” he claimed.