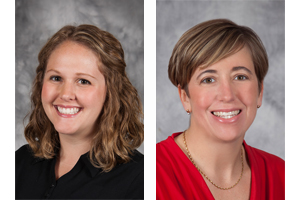 The Manufacturing Institute has honored two Cooper Tire & Rubber Co. engineers with a Woman in Manufacturing STEP (Science, Technology, Engineering and Production) Ahead Award for 2016.

Heather Mosier, Cooper’s SUV and light truck tire development manager at its North America Technical Center in Findlay, Ohio, and Nichole Williams, a Six Sigma Black Belt at Cooper’s manufacturing facility in Tupelo, Miss., were recognized for their excellence and leadership in manufacturing.

“It’s gratifying to see that two Cooper leaders, out of hundreds of women who were nominated nationwide, earned this important recognition. Heather and Nichole continue to make a positive impact at our company in the field of manufacturing and in our communities,” said Roy Armes, Cooper’s chairman, president and CEO. “Both play integral roles at Cooper and serve as outstanding role models to other women and men in their manufacturing careers. On behalf of everyone at Cooper, I congratulate Heather and Nichole and wish them continued success.”

Mosier has 20 years of automotive experience and led a group of engineers in developing Cooper’s award-winning Discoverer SRX, Discoverer A/TW, and Discoverer STT Pro. She earned a bachelor’s degree in chemical engineering from the University of Cincinnati and a master’s degree in manufacturing management from Kettering University in Flint, Mich.

Williams was honored in the STEP Ahead Award Emerging Leader category for women in manufacturing under 30. She joined Cooper in 2013 and helped drive efficiency in manufacturing and waste reduction at the Tupelo plant. She earned a bachelor’s degree in chemical engineering from the University of Mississippi.

This is the fourth year of the STEP Ahead Awards program and winners will be recognized at a reception in Washington, D.C., in April.

Advertisement
In this article:Award, Cooper Tire, STEP, women in manufacturing