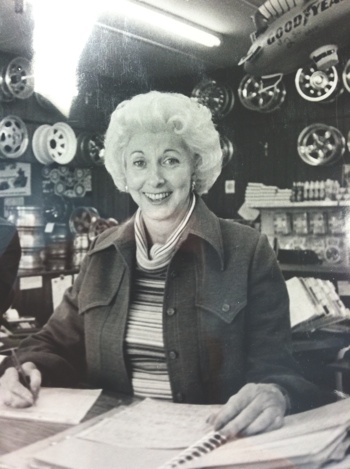 Rosemary, who served in the Army Air Corps during World War II, worked her way up in the industry and was named director of the Southern California Tire Dealers and Retreaders Association, the first woman to receive the coveted title. She also served as vice president of the organization. 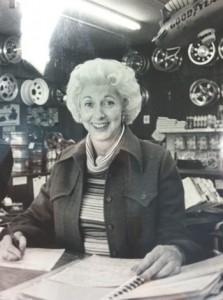 Rosemary Tucker took over Tucker Tire Co. in 1965 when the business was on the brink of bankruptcy.

In 1978, Rosemary won California’s Small Business Person of the Year Award and was third runner up for the national SBA award.

Outside of the tire industry, Rosemary was recognized in the community for helping to start the first hospice in Covina and for her service on the board of the Inter-Community Hospital in Covina.

Her three sons joined her in the business after they finished high school. Eldest son, Tom, eventually moved to Laguna Niguel, Calif., and started his own Tucker Tire while middle son, John, and youngest son, Jim, stayed on and took over for Rosemary when she retired in 1978.
While Rosemary was happy to hand the reins to her sons, she made sure they didn’t take it for granted.

“Like any teenage boy, I was a little rambunctious and she didn’t feel it was right for me to come here so she had me go work for Goodyear Tire & Rubber Co.,” Jim explains. “I worked for them for three years. She wanted me to experience the corporate world before coming into the family business.”

Rosemary passed away in 2011 at the age of 87 but the business continues to thrive.

“She was a loving, beautiful lady,” Jim says. “And she was well loved and respected in the tire industry.”

Talk to a Tucker

Today, the company is as successful as ever, employing 32 people at the family’s shop in Covina.

“We do front-end alignment and brakes,” Jim says. “No oil changes, no tune-ups. Our concentration is really just tires.”

They carry a variety of brands including BFGoodrich, Bridgestone, Cooper, Goodyear, Hankook, Michelin and Pirelli.

The Tuckers continue to operate the business out of the same location where their father founded the company in 1956; but over the years they’ve added on to the property.

“Our sales office is where my dad started,” Jim says. “In 1975, we built the warehouse. It’s 6,000 square feet and that’s where we inventory most of our tires. In 1982, we opened Tucker Tire Service, that’s where we do the service work.”

Jim credits their success to the reputation the family has built with more than 50 years in business.

“My mom was very involved in the community,” Jim says. “She had such a reputation and she was so trusted and that all rolled into the company.”
Jim adds that the shop has always been a trusted spot for female customers including his own wife. “My wife back in high school, her dad was the mayor of the city down the street, and he used to tell her ‘you go to Tucker Tire, that’s the only place you go when you need tires.’”

One of the ways they’ve been able to keep their strong reputation is through customer service and always letting the customer talk to a “Tucker” if there’s ever a problem.

“It doesn’t get pushed to the back and get taken care of a day later, it gets taken care of right now,” Jim explains. “My brother and I are both here from 7:30 in the morning until we lock the door at night. We’re always visible. We’re always involved. That’s why we never wanted multiple stores, because we want people to walk in and find Tuckers here.”

Today, Jim and John are joined in the business by their children, Jim’s son, Jeff, and John’s daughter, Lisa.

Jim says their market is very competitive, which includes discount tire stores as well as big box chains. “I can drive a mile up the street and there’s a tire store on every corner,” Jim says. “We just feel we’re unique in the way my Mom raised us and the way we do business.”
Despite the competition, Jim says customers prefer to come to the family owned shop.

“Ninety percent of our business is within five square miles,” Jim says. “We keep very good track of where our business comes from.”

He adds that their salesmen have been with the company for more than 30 years so customers can feel confident that they’re getting expert advise.
“We’re family here and people like that,” Jim says. “The store has been here forever. You don’t find that anymore.”

The company no longer uses traditional advertising methods and instead relies on their revamped website and marketing within the community. The website features the tagline: “When You’re Tuckered, You’re Tired!” and numerous photos of Rosemary and the family from over the years.

“Our money is spent now at advertising at the high schools, at the local baseball and football fields or golf tournaments,” Jim says. “We’re putting banners up, advertising in their programs.”

He says they also keep track of Internet reviews.

Outside of work, the family is also involved in the City of Covina, including the chamber of commerce and various social groups and networking groups.