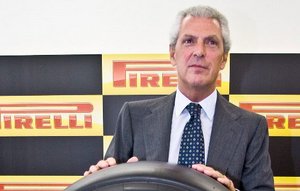 To mark his upcoming 66th birthday on Jan. 18, Marco Tronchetti Provera granted German newspaper Frankfurter Allgemeine Zeitung a long interview. During this he shared his intention to step down as Pirelli’s chief executive in the coming two years and subsequently sell the family’s 25.1% in the company. His three children are following their own paths and anyway it is difficult to inherit the role of business entrepreneur.

Until last year, Tronchetti was also engaged in a showdown with the Genoa-based Malacalza industrial family. Tronchetti originally invited the Malacalza family to become investors, but later Tronchetti gained the impression they were trying to oust him. In the course of this struggle Francesco Gori, in charge of Pirelli’s tire business, lost his job. He now serves as an advisor to Malacalza Investitmenti, which is currently the second-largest Pirelli shareholder but openly interested in expanding its involvement.

When Tronchetti Provera took over leadership of Pirelli aged 43 in 1992, the company stood on the edge of the abyss following its failed hostile takeover of Continental. With a firm hand he managed to turn the company around, a feat achieved by selling everything not required for the core tire business. He experienced his finest hour in 2000 when he succeeded in selling two small, low hundred-million turnover subsidiaries for approximately five billion euros. But this triumph also marked the beginning of a miserable period. With the money earned from the transaction, Tronchetti bought into Telecom Italia and well and truly burned his fingers with this investment. The deal was barely completed when the 9/11 attacks in the U.S. sent the stock market tumbling. Later on, bickering with the Italian government about the Telecom business added to these troubles, and Tronchetti retreated from Telecom Italia with losses amounting to billions. In the meantime, the company’s financial position became so tense that discussions about selling the truck tire business were held. To this day Pirelli has not disclosed whether or not any potential purchaser showed an interest in the business and what was on offer.

During his interview with the Frankfurter Allgemeine Zeitung, Tronchetti refers to Pirelli Tyre’s tremendous development and implies a connection between this success and himself. But to maintain a fair balance, we cannot ignore that the activities Tronchetti has pursued outside the tire business, such as Telecom Italia and later the real estate sector, didn’t live up to expectations and burdened the company. And it simply can’t be forgotten that the sole constant in the Pirelli empire was and remains its tire business. The Italian firm has always shone in this field of business and generated a good level of income.

During last year’s shareholder power struggle, Tronchetti was forced to recognize that numerous managers sympathized with his opponent Malacalza as, or it was at any rate expected, the business family would have more focused more upon the smooth-running tire business than on new investments outside the company’s core business. With the – temporary – settlement of the dispute between the two business families, quite a few senior Pirelli managers lost their jobs or left the company.

Sentiment within the Pirelli Group is currently not that great or positive. The substantial pressure upon upper management can be sensed. Standards, whether turnover or revenue, are extremely ambitious. This is unlikely to change, either, as in the coming 24 months a priority will be to further massively increase the already elevated Pirelli share price, as ultimately, with his departure from Pirelli, Marco Tronchetti Provera celebrates his last major deal. (Tyres & Accessories)