Community involvement, unique entertainment- this dealership is a pro at commanding attention.

As Craig Schoenthaler prepares for retirement, the Tred Shed Tire Pros owner takes comfort knowing his son Kyle and the team he has built will keep things running smoothly while he enjoys his golden years.
The Pittsburg, Calif., shop has been in business for 33 years and has been part of the ATD Tire Pros family for two decades.

Schoenthaler’s success didn’t happen overnight – it’s a result of his dedication to doing good work for customers, being involved in his community and taking advantage of the Tire Pros network. 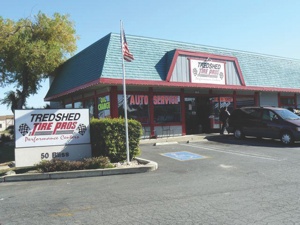 Schoenthaler’s journey into the tire business began in 1981. After serving in the Navy for six years, he returned to northern California to help his father manage a company called Maverick Tire Supply Inc.

“Maverick Tire Supply was a whole­sale distributor of primarily truck tires,” explains Schoenthaler. “My dad brought Sumitomo tires into the county in 1981.”

While working with his dad, Schoenthaler realized there was a need for a quality tire store in his hometown of Pittsburg.

“I told my old man, ‘We ought to think of opening a little retail shop in town,’ so we did. We opened a one-man, one-bay store and that’s all we did was tires.”

Schoenthaler explains Tred Shed started off modestly and grew slowly. After a few years, he added a second bay and began offering alignments along with tires.

“Then people wanted us to do brakes, so we started progressing into auto repairs, too,” he says.
After a few years of building a reputation through word of mouth and a quarter-page Yellow Pages ad, Schoenthaler decided to purchase another shop in nearby Antioch. 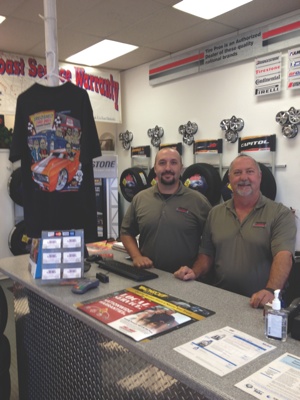 “My brother ran the one in Antioch,” Schoenthaler says. “It only lasted about two years because (the city of) Antioch was taking our building away. They were putting a street right through it. So we consolidated stores into a new building here in Pittsburg.”

He also signed onto the Tire Pros network, which he says has been an invaluable experience.

“I got to travel a lot around the country and meet other tire dealers like me,” he says proudly.

Current Operations
Tred Shed today is “top of the line,” featuring six bays inside and the capability to do additional service outside, as well.

On the service side, the dealership works on everything from air conditioners to fuel systems to batteries and almost everything in between.

“We do lots of preventative maintenance. We do over 500 oil changes a month. We try to do at least 1,000 tires a month.”

As an independent dealer, the shop carries most major tire brands including Michelin, BFGoodrich, Bridgestone, Firestone and Hankook.

Schoenthaler says he’s proud to offer top quality products, so he doesn’t carry off-brand tires and the shop does not install parts brought in by customers.

“That’s like taking a steak to a steakhouse and asking a chef to cook it for you,” he says. “We pride ourselves on using quality products and quality staff to install them.”

He says the service customers receive from employees at Tred Shed is just as important as the products offered.

He adds that having a “can do” attitude is what he looks for first and foremost in an employee.
“I want my guys to want to fix your car as if it were their car,” says Schoenthaler.

All of his technicians are well-trained and certified, and he says they regularly take advantage of new training opportunities and refresher courses when they’re offered locally.

“One of the things we did, without my wife’s permission (she is the chief financial officer) is Kyle and I and the management team voted to spend $400 on this old locomotive train horn,” explains Shoenthaler. “It’s a 165-decibel horn and it is so cool!”

Schoenthaler says customers who buy a set of four tires have the opportunity to blow the train horn. “You can hear it all the way to city hall!” he says, adding that the town has been surprisingly supportive of the idea.

“We thought for sure we would get in trouble, that someone would complain about it, but thankfully nobody has,” he notes.

Along with the unique train horn, the shop also has a mascot – Shoenthaler’s dog, Sally Sue.

“She has worked here for six years,” he says. “She’s a little white dog and she’s very friendly. She hangs out with the customers. She greets you at the door and she jumps on your lap while you’re waiting.”

“She’s been known to defuse some unhappy customers,” he jokes. “They can be ticked off about something one minute but as soon as they see Sally, they change their mood.”

In his 33 years of business, Shoenthaler says his favorite part of owning Tred Shed is taking care of customers.

“These folks come in to get their car fixed, but they’re also asking about my kids and I’m asking about their kids,” he says. “We’re all like family.”

Tred Shed has been involved in countless community activities, from sponsoring little league to helping with community events. “I’ve got five kids so we have sponsored a number of sporting events and high school events and community events,” he says.

With his son Kyle taking the reins, Shoenthaler says it’s been fun to watch the transition.

“He’s going to take over for me. It’s cool because as I’ve watched Kyle grow up, we’ve taken care of lots of people in the community. It’s very close-knit. When the kids were in school they played baseball, and I watched all these kids grow up. Now they are Kyle’s age and he’s taking care of their cars now. The transition has been fun to watch.”

Schoenthaler doesn’t have an official retirement date in mind, but says he estimates he’ll be ready in the next year or two. “I’m still going to come and hang out because it’s fun to hang out here,” he says. “We have ‘groupies’ that hang out at Tred Shed because it’s so much fun.”

He says he’s looking forward to spending more time on his boat and traveling with his wife in their RV.