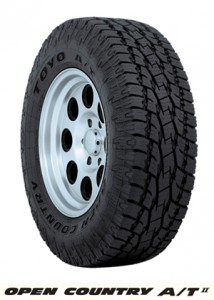 The tire, which is produced by Toyo Tire North America Manufacturing (TNA), is the first product produced by TNA to be adopted as OE by an American car manufacturer, the company noted.

The Open Country A/T II was launched as a replacement tire in August 2012  and in less than a year the tire had more sold more than one million units, Toyo said.

Advertisement
In this article:OE, Toyo Tire