A tornado Thursday night injured two employees and tore a 100-yard hole in the roof of the main warehouse of Bridgestone Americas’ one million-square-foot distribution facility in Lebanon, Tenn. 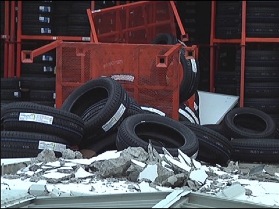 Both employees were treated and released from area hospitals that night; one was a security guard who had been in a metal guard shack that was overturned by the storm, while the other suffered a back injury from flying debris inside the facility.

According to Bridgestone, some 35 employees were moving to the company’s emergency shelter inside the facility when the storm tore the hole in the roof.

Other tornado damage in the area included a Tennessee Valley Authority electrical tower near Bridgestone that had been twisted in a circular fashion, as well as lost trees, roofs and some smaller structures.