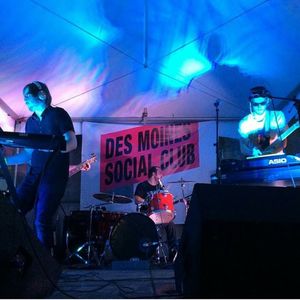 The headline alarmed me. “Local band Tires ends its journey.”

Damn. My band was gone. For all time…or at least until they decide to reunite for a nostalgia tour.

Most of that is a joke, but it is true that Des Moines-based indie band Tires has officially broken up “ending their three-year run of bringing a unique blend of hard rock and electronic music to the Iowa music scene,” as reported by the Iowa State Daily.

Tires didn’t break up due to egos run wild or so-called creative differences or any of those rock star problems. Rather, the individual members had a lot of musical irons in the fire, and Tires wasn’t glowing red hot.

Unfortunately, as Walmart is to tires, Tires was to Tires. Even after putting out a number of EPs and playing big gigs, Tires wasn’t the “primary creative outlet for many of the members. In addition to various solo projects, band members are active in a number of bands including Annalibera, The Wheelers, The Volcano Boys and Easy Fruit,” the newspaper reported.

The Tires played their last gig on Sept. 26. As of today The Tires will forever be in the Tire Review Rock Band Hall of Fame.

Those of us in Northeast Ohio have seen TV commercials by RightTurn.com, the online tire store fronted by Cleveland-based Dealer Tire. You’ll recall that the founder of Dealer Tire Scott Mueller used to be like you, but now he sells replacement tires to car dealers – hence the name Dealer Tire.

RightTurn.com is a reach directly to consumers, and its Ohio TV spots danced around the whole car dealer thing. In fact, when ordering tires from RightTurn.com, the consumer can chose from several brands and models and price points. But the tires aren’t shipped to the consumer’s home.

RightTurn.com directs the transaction to a car dealer. For instance, I searched for tires for a 2004 Mitsubishi Lancer OZ Rally – a car I recently disposed of. The site gave me numerous tire choices from a dozens brands, but the first two – a Kumho and a Hankook – were “recommended.” Once the number of tires and price was set, the site told me that my tires would be at “Rick Case Mitsubishi” in nearby Bedford, Ohio, and an appointment was already made for me at the location.

“Rick Case Mitsubishi” no longer exists. Hasn’t been under that name in more than a year. I know this because I just leased a new Hyundai from that very store.

But let’s say you didn’t want to use that car dealer. Well, RightTurn.com is ready with a list of all other marque dealers in your general area, in this case four other Mitsubishi dealers in Northeast Ohio.

Northeast Ohio was the test bed for RightTurn.com. Apparently it passed the test as Dealer Tire has hired Cramer-Krasselt in Chicago as its new lead advertising agency of the web endeavor, and plans to drop $25 million in its 2015 campaign.

Dealer Tire was started in 1999 as a stand-alone wholesale business of Mueller Tire & Brake, a well-respected independent tire dealership founded in 1918 by Scott Mueller’s grandfather Walter J. Mueller. In 2002, Scott and brother Dean sold the 19-store retail business to TBC Corp., but kept the separate wholesale business with an eye toward building arm-and-arm with car dealer business.

Today, Dealer Tire has 20 warehouses across the U.S. And now it will begin a nationwide push direct with consumers.

Hats off to Frank Vigna, owner of Frank’s Tire, Auto & Truck Repair in Flushing, Queens, N.Y., who has pulled together both friend and competitor to hold the now annual “Rotate and Donate” fundraiser to support the Susan G. Komen breast cancer awareness organization.

Vigna has run the fundraiser – donating $15 for each tire rotation his business does in the month of October – for a number of years. This year he wanted to up the ante and be able to make a larger donation to the group. So he enlisted the help of several other Queens tire and auto service shops, and together they are promoting the effort and collecting donations. Vigna hopes to do much better than the few hundred dollars he has donated from the effort.

Even without the breast cancer awareness donations, Vigna knows the effort is also bringing awareness to the importance of regular tire rotations.

Helping with Rotate and Donate this year are Barney’s Service Center in Bayside, Gregg’s Tire and Auto in Floral Park, Auburndale Tire in Flushing, and Brendan’s Service Station in Flushing.

Nice work…proud of you guys!

Cops across the country will be out in force the week of Oct. 19-24 in “celebration” of National Safe Driver Week.

Their celebrating will consist of “engaging in heightened traffic safety enforcement and education aimed at unsafe driving behaviors by both commercial motor vehicle and passenger-vehicle drivers.”

“During Operation Safe Driver Week, activities will be held across the United States, Canada and Mexico with the goal of increasing commercial vehicle and non-commercial vehicle traffic enforcement, safety belt enforcement, driver roadside inspections and driver regulatory compliance,” the press release read. “In addition to enforcement, education is an important component of Operation Safe Driver Week. Law enforcement and transportation safety officials will offer educational and awareness safety programs to the motor carrier population and the motoring public.”

So, it is a good program, a noble effort. But you’ll want to watch your speed!

Tires Go Flat, Car Dealers Get a Boost, and Charitable Dealers Do Good