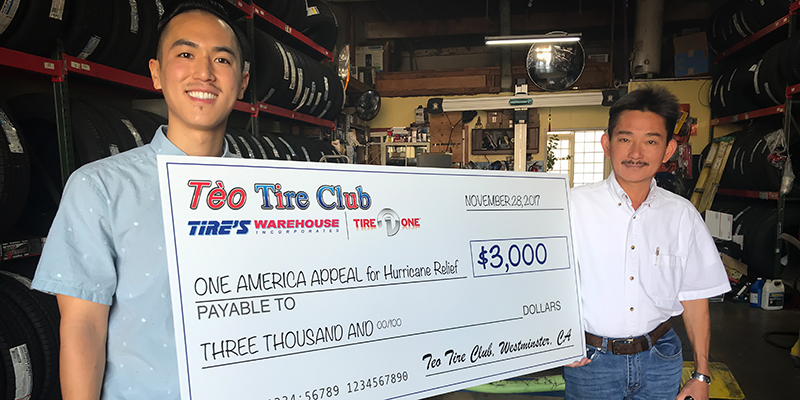 Tire’s Warehouse, Inc. recently held its 3rd Annual Tire One Dealer Event in Las Vegas, Nev. The main draw for its 200 plus dealer attendees was a blackjack-style tournament, in which three lucky players would take home one of three prizes: a 2017 Jeep Wrangler, $3,000 or $1,000.

The 2nd place prize of $3,000 was awarded to Cong (John) Ton, owner of Teo’s Tire Club in Westminster, CA. Immediately upon receiving his prize, Ton announced that he would be donating it in full to the One America Appeal for Hurricane Relief organization (www.oneamericaappeal.org).

The One America Appeal is a joint appeal that was originally launched by all five living former American presidents to encourage fellow citizens to support recovery efforts from Hurricane Harvey and was later expanded to include areas affected by Hurricanes Irma and Maria.

In early September, Ton and his wife Yen Nguyen had plans to take a vacation to Miami, FL. Days before their scheduled departure, news of a hurricane in the region forced the trip to be canceled. Shortly after, the One America Appeal was announced. Ton immediately wrote a check for $2,000 to use money saved from the canceled vacation to support the cause. In addition, he asked employees and even customers to donate as well, and collected even more.

“Because of the hurricane, my wife and I lost a vacation. But on the flip side, because of the hurricane, the locals are going to lose their homes and properties. Helping those victims recover is the least I can do,” said Ton. “When we won the $3,000 prize, it was like a calling. With the winnings, we have the opportunity now to do just that.”