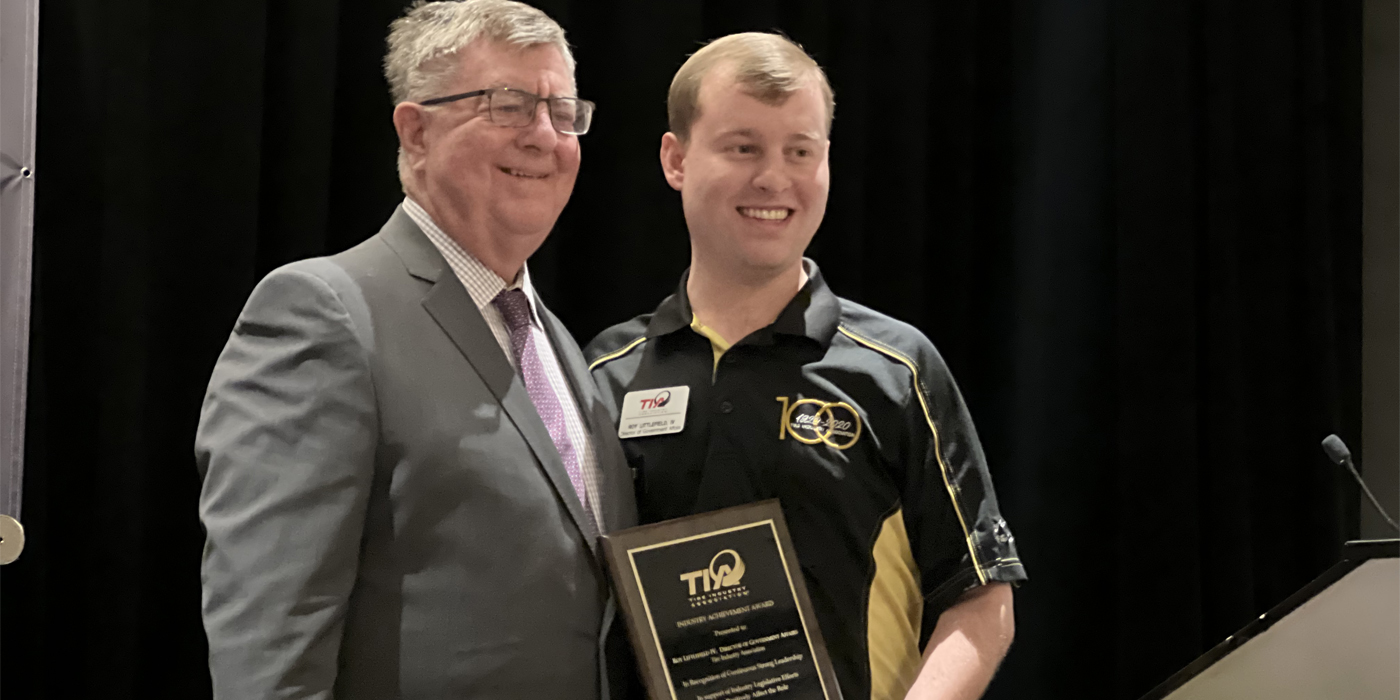 The Tire Industry Association (TIA) honored its Hall of Fame recipients and other industry award winners at the Tire Industry Honors Event Nov. 1 at The Cosmopolitan hotel in Las Vegas, prior to the start of the Global Tire Expo/SEMA Show from Nov. 2-5.

At the ceremony, Littlefield was commended for growing the association from 2,700 to 13,000 members. As the association’s first full-time government affairs director, he initiated periodic Lobby Days in Washington, D.C., grew the association’s political action committee and expanded its legislative influence at the federal, state and local levels for the benefit of TIA members and the tire industry. According to TIA, the organization expanded its tire technician training programs to cover all tire types and saw the number of TIA-trained techs grow to more than 200,000 under his tenure.

Littlefield III also honored his son for his service to the industry with the Industry Achievement Award and commended him on his legislative achievements.

Bob Ulrich, retired editor of Modern Tire Dealer, honored Martin J. Barry (deceased), three-term president of the National Tire Dealers Association, and read a letter of thanks from Barry’s family. Barry guided the association through two evolutionary name changes, the Great Depression and World War II, TIA said. He was elected National Tire Dealers’ Association (NTDA) president in 1931, 1932 and 1933. He championed a new retail code of ethics for both tire and battery distribution and helped organize the “Code Convention” in 1934, along with Code Authority Chairman Norwal P. Trimborn, TIA says.

Monte Niemi, CEO of First State Tire Recycling in Isanti, Minnesota, was honored as this year’s recipient of the 2021 Ed Wagner Leadership Award. Incoming TIA CEO Dick Gust presented Niemi with the honor, praising him for creating innovative ways to use raw material from tires in civil engineering projects.

TIA said Niemi is a leader in developing markets for tire-derived aggregate (TDA), which has many civil engineering applications. He was instrumental in creating the market, formulating material specifications and working with civil engineers on various projects leading to construction design specifications, TIA said. Niemi is also credited for sharing his expertise with others in the industry through conference presentations, industry committees and public works meetings. Niemi is a member of TIA’s Environmental Advisory Council, and through his leadership and efforts, the use of TDA is spreading throughout the tire industry, TIA says.

In addition, Miles D. Moore, retired senior Washington reporter for trade publications Rubber & Plastics News and Tire Business, was honored as the recipient of the Friend of the Industry Award. From 1977 to 2020, Miles Moore was a reporter for Rubber & Plastics News and Tire Business, both published by Crain Communications Inc. During most of that time, he was a Washington reporter for both trade newspapers, covering legislation, regulations and court cases of vital interest to the tire industry, TIA says.

In recognition of service to a state association, Tony DeSimone, executive director of the New England Tire & Service Association, was honored with the Industry Achievement Award. Littlefield III praised him for his work on defeating crumb rubber legislation and organizing a “tremendous grassroots effort” in defeating the bill.

MORE: Get the latest updates from the 2021 SEMA Show