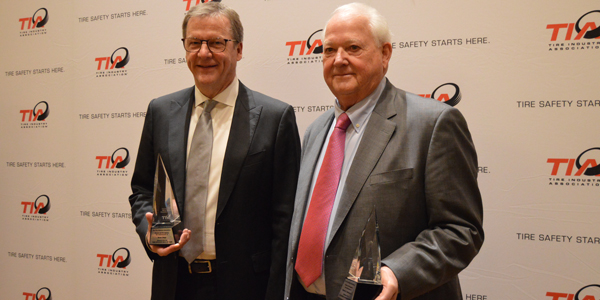 Brent Hesje, CEO of Fountain Tire, and Frank Holeman, director of the Tire Industry Safety Council, were inducted into the Tire Industry Hall of Fame. Edward A. Burleson, Sr., owner and president of Central Marketing, was recognized with the Ed Wagner Leadership Award.

Hesje, who joined Fountain Tire Ltd. in 1992 and became CEO in 2005, thanked Fountain Tire, its shareholders, the board and Goodyear Tire Rubber Co, which owns 49% of the dealership, for their continued support. He also thanked Fountain Tire staff, which he called “the lifeblood of our organization.” During his time with the company, Fountain Tire has nearly tripled its number of stores from 56 in Alberta only to 160, and expanded its marketing territory across Canada from British Columbia to Ontario.

The family of the late Holeman sent in a letter to TIA, which thanked the organization for recognizing the powerhouse their father was. Holeman, who was director of the Tire Industry Safety Council (TISC) from 1969 to 1987, was the public voice of safety for tire manufacturers, dealers and distributors. He was “the pioneer in presenting the public and the federal government the industry’s message of dedication to tire manufacturing excellence, quality professional service and the necessity of proper tire care and maintenance,” TIA says. He was also president of the National Press Club, and is credited with brining together Russians, Cubans and Americans to negotiate the end of the Cuban Missile Crisis in 1962.

In his acceptance speech for the Ed Wagner Leadership Award, Burleson thanked the industry for the honor, saying “I’m fortunate to be part of this industry and I enjoy working with the people in it.” He told the audience that as technology advances, the industry and tire businesses will be required to change how their business operates. Burleson began his career in the tire industry in high school working at a Goodyear retail tire store. In 1975, he opened Tire Associates, a wholesale and retail tire distributor and retreader in Richmond, Virginia. About 11 years later, he started Central Marketing Inc., focusing initially on rubber sales and casings, and later expanded his business to provide automated equipment for new tire manufacturing. In addition, Central Marketing has become one of the largest distributors of reconditioned retread equipment in North America.

During the ceremony, Rigney also touted the work of the TIA Foundation in funding the organization’s training programs. To show its commitment to tire dealer training, Doug Kershaw, vice president of BKT USA, addressed the crowd and presented Rigney a $5,000 check for the Foundation to continue its efforts.