TIA's Gust on Strategy, Next Generation of Tire Dealers 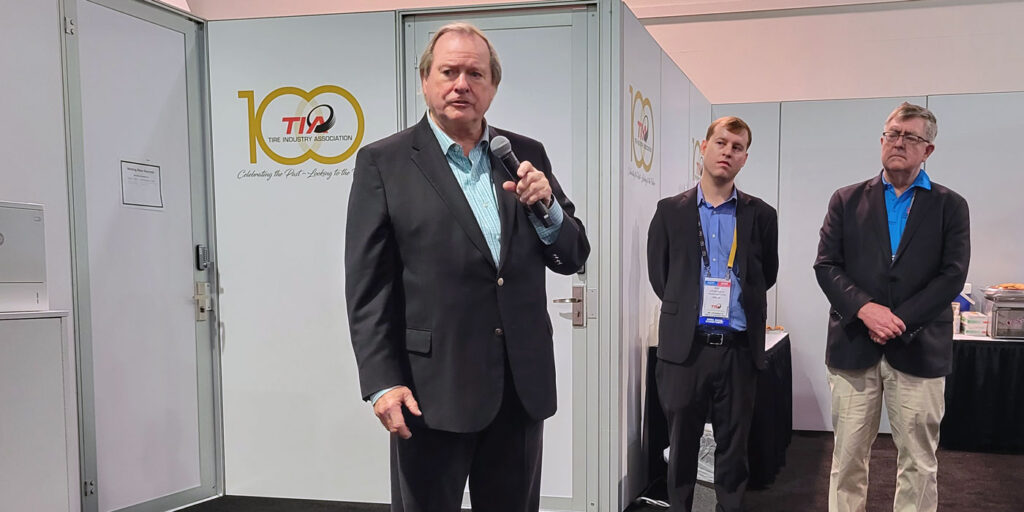 The Tire Industry Association has a long history of supporting and providing industry training and lobbying for the industry when it comes to local and state governments, all of which are initiatives incoming CEO Dick Gust will continue, he said during a TIA press conference at the 2021 SEMA Show in Las Vegas.

“Moving forward, my plan is to build on the great foundation that has already been in place by the people you see behind me,” he said. Gust credited Roy Littlefield III, outgoing CEO; Roy Littlefield IV, his son and TIA’s director of government affairs; Dave Zielasko, TIA’s vice president of marketing and communications; and Kevin Rohlwing, vice president of training, as creating a solid foundation in which to further build on and improve the organization.

TIA’s training programs have been successful because of experts like Rohlwing, senior vice president of training, and because members care about safety, which is “what we’re all about,” Gust said.

He added that government affairs are close to his heart.

“Roy and I worked many, many hours on legislation to protect our members and for the good of the industry and we are going to continue doing that,” he said.

Gust said he thinks TIA can expand some of its training programs to include new people who are entering tire sales and installing tires. In the next year, he said the organization will be challenged by some of the infrastructure and state tax bills that are going on and that TIA’s job is to protect its small business owners.

“Most of our dealers are small businesses, and we need to be responsible to their interests,” he added.

Attracting Young People to the Industry

Gust said he plans to focus on finding ways to encourage young people to consider the tire industry as “a way to generate professional growth.”

“Getting out of college, getting out of the trades and moving into the tire industry is something I’d like to promote even more,” he said.

He added that TIA is also interested in encouraging more younger people in the industry to run for TIA’s board.

Roy Littlefield III said TIA went through a lengthy process when it came to choosing a new CEO to take his place when he retires. At the beginning of the search, he said TIA looked at five people who were insiders to the industry and then moved to a search firm to interview over 100 people in the industry to try to narrow it down.

The search came back to that first group of five insiders, which Gust was a part of, and TIA decided he was the best person for the job, he said.