The ATV was born out of necessity when Japanese farmers needed a better way of getting to town from farms that were located in isolated, mountainous areas. 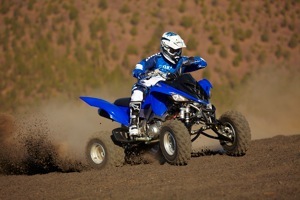 Rainy seasons made the mountainous roads impassable with conventional vehicles and thus the three-wheeled ATV was developed to provide transportation to and from these areas. Honda brought the ATV to the U.S. in the early 1970s and it was marketed as a recreational vehicle. It also helped motorcycle dealerships sell product during the slow winter months.

Sportsmen began using ATVs to access areas that even four-wheel drive pickup trucks could not. Consequently, the ATV quickly became a popular hunting vehicle that could reach even the most remote locations and help transport game out of these areas.

The remaining 10% to 15% of the market is the relatively new breed of the UTV segment, which is essentially a cross between an ATV and a pickup truck. These started as work-based vehicles (think John Deere Gators) and evolved into two- and four-seaters that can go virtually anywhere.

Tires became an integral part of making these vehicles successful. ATV tires need to traverse a variety of surface conditions – ranging from mud, hard-packed dirt and sand to water, rock, ice and snow – in addition to being durable. Puncture resistance is a must considering the remote areas that the ATV can access.

Internal Components
Taking an in-depth look at the ATV tire, we find that the bias tire makes up about 90% of sales, the remainder being of radial construction.

A true radial construction has body plies running from bead-to-bead at a perfect 90-degree angle as measured from the circumference. Most radial tires generally have ply angles close to 90 degrees, but engineers incorporate a slight bias to gain greater stiffness.

Bias tires generally have ply angles of less than 65 degrees, making them inherently stiffer and more robust. This is because the body ply angles move opposite to each other when deformation occurs at the footprint, thus creating a resistance or shear.

This is advantageous when encountering rocks, tree stumps or other tire-threatening debris when flying down the trail. The major disadvantage of the bias tire is ride comfort, as the stiffer construction sends shockwaves through the suspension and into the rider. The advantages far outweigh the disadvantages though, which is why bias construction dominates the ATV market.

There are different ply ratings available for the ATV market. A higher ply rating is recommended for rough terrain in order to resist punctures. When ply rating standards were first developed in the early days of ATVs, the ply rating number actually designated the number of plies (notably of less durable material than is used today) that made up the casing.

A tire today marked with a six-ply rating may only be constructed of two physical plies, but those plies meet the strength requirements established from the original standard. This is, in part, due to the advancement of fabrics used for the plies such as polyester, rayon and nylon.

Bias-constructed tires generally do not require belts under the tread because of their inherently robust construction. Radial tires require belts, usually made of steel, to not only provide strength, but to also maintain an inflated profile and consistent footprint shape.

In order to allow ATVs to travel over changeable terrain such as snow, mud or sand, the flotation tire was the best mold-profile design option as it spreads out the load of the vehicle over a greater contact area.

This prevents the tire from sinking into the surface and eventually digging down to the point of becoming stuck. Flotation also allows for lower operating inflation pressures, thus improving ride quality.

On the Surface
Another important element for traction is the tread pattern. Like an all-season passenger radial, an OE ATV tire must be able to handle a wide variety of terrains and generally compromise ultimate traction in order to be able to address virtually any condition. The aftermarket provides consumers with terrain-specific products, allowing the ATV to conquer a particular surface.

Tread patterns intended for soft conditions, such as mud or sand, generally have lugs that span the width of the tire in order to produce a paddle effect to propel the ATV forward. An extreme case is tires designed for sand where the lugs have mutated into large paddles that help deliver the mechanical traction needed for such a viscous surface.

Button-type lugs, which help balance traction and self-cleaning characteristics, are used for most other terrain conditions. The ratio between lug contact area and void varies depending on intended terrain and handling characteristics.

Through product testing, test riders evaluate the balance between forward and side bite and the ease and progression of vehicle slide. Too much traction in either the forward or lateral direction could upset the vehicle and create a challenging situation for the driver. For this reason, a balance between the two is necessary and can only be verified through seat-of-the-pants testing.

Efficiency of the tread pattern can be judged by the amount of rooster tail that the ATV generates. Although a large rooster tail makes a great photo and is certainly fun to spray anyone riding behind, it is generally an indication that the tread pattern isn’t well suited for the terrain. A tread pattern that shoots soil low to the ground is highly efficient because there is more energy used to propel the vehicle forward rather than throwing debris high up into the air.

Tread compound formulation works in harmony with the tread pattern design. The physical properties of the tread rubber are engineered for durability, traction and wear.

The softness of the tread rubber is balanced with the geometry of the tread lugs to maximize these three properties. For example, a soft tread rubber de­signed for winter weather cannot be used in combination with a deep tread lug design because the lugs will simply fold over and be of no use. The same can be said for paddle-type tires used for sand.

The tread compound cannot be too soft or too hard. A soft compound will allow the paddle to fold over and a hard compound may be too brittle and compromise durability. Tire engineers match the tread rubber with the tread pattern design to achieve the balance needed to give the vehicle its necessary performance.

The evolution of the ATV tire has progressed as rapidly as the vehicles themselves since their introduction into the U.S. market nearly 40 years ago. As with all tires that come as OE, compromises are made to satisfy a variety of riders and riding conditions. Changing over to aftermarket tires designed and engineered for a specific terrain will maximize use of the ATV and allow the rider to take the path less traveled with complete confidence.

The Science Behind, Inside the Versatile ATV Tire