Modern battery technology is changing the way we deal with battery testing and replacement. To illustrate, absorbed glass mat (AGM) batteries are, in some applications, replacing the conventional "flooded" wet-cell batteries. 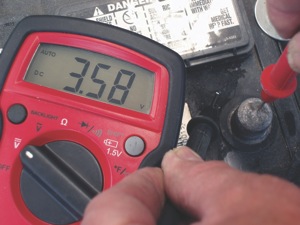 Flooded batteries consist of positive and negative plates suspended in an electrolyte consisting of about one-third sulfuric acid and two-thirds water. The flooded battery is cheap and powerful, but it tends to leak electrolyte around the posts and vents, and to produce more noxious gases as it is recharged.

AGM, on the other hand, contains or absorbs its electrolyte in a glass mat that is sandwiched bet­ween the positive and negative plates. The advantage of AGM is that it produces less gas during re­charging and, because the electro­lyte is absorbed into the glass mat, leaks very little acid.

While conventional AGMs are built with spiral-wound cells, modern “flat-plate” technology now allows AGMs to be built in a conventional cell configuration. The downside of AGM batteries is, of course, that they are more expensive.

As a point of interest, the “gel” battery, in which the electrolyte exists in a gelled state, is used in specialty applications such as racing vehicles, where accidental acid spillage might create a hazardous condition. Because gel batteries aren’t generally used in original equipment applications, we’ll just say that overcharging can easily ruin a gel battery because it creates bubbles or voids in the battery’s electrolyte.

Starting & Deep-Cycle Designs
Batteries generally are designed as starter or deep-cycle storage batteries. In general, starter batteries are desig­ned with thinner and more numerous plates so they can discharge and recharge at relatively high amperage rates. Deep-cycle aux­iliary batteries, on the other hand, are designed to power lights, pumps and other low-amperage accessories commonly found in recreational vehicle platforms.

Deep-cycle batteries have fewer and thicker plates and are designed to discharge and recharge at much lower amperage rates. A deep-cycle can be used as a starter battery, but it will produce lower cranking amperages than a starter battery and may have a correspondingly lower life expectancy when used in that application. Because of their unique plate design, some AGM batteries can perform equally well as a starter or deep-cycle battery.

Battery Capacity
Battery capacity is generally rated by cranking amperage (CA) and cold cranking amperage (CCA). CA is rated at 32°F, while CCA is rated at 0°F. Because a battery produces only 40% of its rated capacity at 0°F, the CCA is the lower value rating. Either of these ratings is the discharge load in amperes that a new 12-volt battery in a fully charged condition can deliver for 30 seconds at the specified temperature, while maintaining at least 7.2 volts at the battery terminals. CCA is the rating most generally used in the colder northern climates. 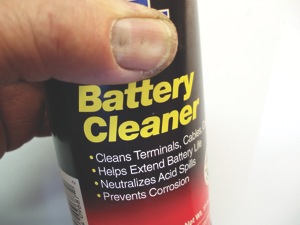 Reserve capacity (RC) is a battery capacity rating that is making a come­back due to more key-on, engine-off accessory use. RC is the number of minutes that a 12-volt battery can supply a 25-ampere accessory draw while maintaining at least 10.5 volts at the battery terminals. CCA and RC aren’t interdependent ratings because, in some cases, a battery with a high RC rating may have fewer plates to accommodate more electrolyte capacity. More electrolyte capacity may generally produce a longer discharge time, but fewer cold cranking amp­eres.

Amp-hour (AH) ratings generally describe the ability of deep-cycle batteries to provide a sustained discharge rate. In general, the AH rating is based on the number of amperes a battery can supply for 20 hours be­fore the battery terminal voltage drops below 10.5 volts. If you’re com­paring battery specifications, remember that battery suppliers often use slightly different threshold voltages to describe the RC and AH capacities of their batteries.

Battery Life
The actual service life of a battery depends upon its design and construction, and the operating conditions to which it might be exposed. Heat and vibration are the battery’s worst enemies since both tend to accelerate the normal shedding of plate material to the bottom of the battery case. In general, the average automotive battery lasts about four years before capacity and reliability become an issue.

When the battery loses a critical amount of plate capacity or when accumulated sediment shorts the positive and negative plates together, the battery fails (see Photo 1). In rare instances, batteries also might experience intermittent failures when vibration causes open circuits to de­velop in their plate and cell connectors.

Battery Testing
Keep in mind that lead-acid batteries are dangerous because they contain corrosive sulfuric acid and explosive hydrogen gas. For this reason, make sure a battery charger is turned off or disconnected before attaching or removing the charging leads. In cold-weather conditions, also make sure that the battery core isn’t frozen before testing or recharging.

If acid is spilled, neutralize it with a water and baking soda solution or immediately rinse it off with plenty of water (see Photo 2). Periodically review the safety procedures contained in your battery supplier’s catalog or training literature and always wear safety glasses, gloves and acid-resistant outerwear when servicing a battery.

A 12-volt automotive starting battery can be tested for its “state of health” and “state of charge” by measuring its open-circuit voltage (OCV), the specific gravity (SG) of its electrolyte, amperage discharge rate or the conductance of its cell plates. All testing and recharging must be done through clean “lead-to-lead” connections because corroded battery terminals or steel terminal adapters can generate false readings.

Before testing, the surface charge should be removed from the battery by turning on the headlamps for several minutes. After the surface charge is removed, a fully-charged battery in good condition should rebound to at least 12.6 volts. While these numbers are approximate because they vary among manufacturers, an OCV bet­ween 12.6 and 12.7 volts generally indicates a 100% state-of-charge, 12.4 volts a 75% state-of-charge and 12.0 volts a 25% state-of-charge. A battery that won’t reach at least 12.6 volts after a thorough recharge probably has a poor state of health.

Testing Specific Gravity
Although testing the specific gravity of the electrolyte isn’t possible on modern sealed batteries, the test can be used on batteries with removable cell caps. Most SG testers automatically compensate for electrolyte temperature and provide a “good, poor or bad” indication of cell condition. In general, the SG of a good cell should be at least 1.250 and should vary more than 0.50 gravity points from cell-to-cell (see Photo 3).

Providing no water has recently been added to the battery, the SG test is very indicative of individual cell condition. If the electrolyte is discolored, the cell plates are likely worn out. If a single battery cell is dry, it’s generally defective and water should not be added. Similarly, a battery that’s been boiled dry by overcharging is generally ruined. The corrosive electrolyte should be rinsed out of the hydrometer after each use (see Photo 4).

In my experience, I solved one intermittent, cold-weather, no-starting complaint on a Toyota Tacoma by testing the specific gravity of individual cells. Although the battery had passed several conductance and load tests, one cell contained pure water, which dropped the CCA and terminal voltage below Toyota’s specifications during cold cranking.

Because this was a new battery, it passed the conductance and load tests simply because many new batteries exceed test specifications by at least 20%. If the battery has removable cell caps, I rely on a specific gravity test to solve cold-starting complaints.

Last, the conductance test has become very popular because it’s fast and can test cell plate condition on badly discharged batteries. In brief,

as the battery plates wear, conductance is lost. Conductance is measured by probing the battery cells with a small alternating current “ripple.” The AC ripple produces an AC voltage response that indicates the condition of the plates.

To prevent overcharging, smart chargers may provide a “bulk charge” rate to replace about 80% of the battery’s depleted charge. The charger may then automatically switch to an “absorption charge” rate when the terminal voltage reaches about 14.5 volts.

The charger then may taper off with a float charge of about 13.4 volts and about one ampere of current to bring the battery up to 100% charge. Other charges may modulate, or “pulse,” the charging voltage.

Regardless of the strategy, modern “smart” battery chargers are a vital necessity in this day of sophisticated battery technology.

The Ins and Outs of Battery Testing and Service