Developing new ways to get customers through the door is always a challenge for tire dealers, but at Triple T Tire Pros in Dyersburg, Tenn., keeping customers is something that was perfected long ago.

Developing new ways to get customers through the door is always a challenge for dealers, but at Triple T Tire Pros in Dyersburg, Tenn., keeping custo­mers is something that was perfected long ago.

After spending more than 40 years in the tire business, Jere Tucker started Triple T Tire Pros in 1991 with sons Keith and Jeff. 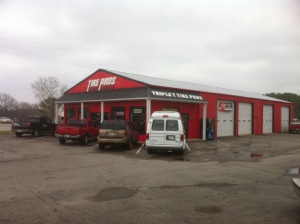 “We started as a single store operation, primarily tires and alignments,” explains Jeff. “It evolved into more of a preventive maintenance facility, but we still do tires heavily and we have expanded to three locations.”
After a few years in the original store, Triple T quickly outgrew the rented two-bay facility and built a new 10-bay, 11,000-square-foot location on the busiest road in Dyersburg.

Over the years, Triple T has been able to buy retail stores from major tire manufacturers as a way to grow and expand the business.

“Rubber was in our veins and it just evolved,” says Jeff. “We’ve always been in the tire business, so it was just a decision to make it our own and continue to grow the business and maintain it for the future.”

Within eight years of opening, Triple T was able to buy out its closest competition, a TCI Tire Centers location in downtown Dyersburg, as well as a Goodyear store across town. In 2002, the company purchased another Goodyear location in nearby Paris, Tenn.

“I would say the major turning point for us would be acquiring those other locations and starting to turn them into independent stores,” Jeff adds.

Services at Triple T include tire sales (including OTR tires), as well as related tire services from alignments and TPMS to balancing and fixing flats. The business also offers 24/7 commercial and farm service calls.

“We encourage preventative maintenance,” says Jeff. “People are keeping their vehicles longer and I think they realize if they take good care of it, it will be a better vehicle for much longer.” 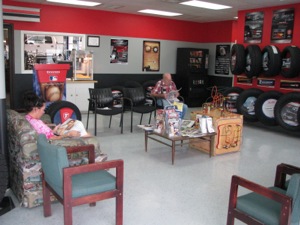 Making Impressions
With more than 20 years of experience operating Triple T, Jeff says they’ve learned what matters most to customers and they continue to build on those expectations in order to grow the business.

He says the first step is utilizing a variety of marketing tools to reach customers.

“There are so many avenues to promote yourself now and different people are attracted to different things, so we have a wide range of marketing to get them here,” Jeff says. “We do everything from Facebook and email marketing to radio and TV.”

With the increasing popularity of supporting locally owned businesses, he says the dealership has seen an increase in business by being invol­ved in the community and showing the public that Triple T wants its business.

“We try to do as much community involvement as we can,” says Jeff. “We promote Toys for Tots and we do local things with the schools. I think that shows the community that we’re real people – and a lot of customers like to do business with real people.”

He adds that customer referrals also make up a large portion of new business. “When they walk in and they’ve been referred by other customers, they already have a relationship with us. They already have an expectation and we have to build on that.”

There are many ways to make an impression on a customer, and Jeff says Triple T strives to make sure its entire experience is a good one.

“In our industry, no one wants to buy tires and get their vehicles repair­ed, so we’re trying to create a niché of our own,” he says. “Like a lot of independents, we’re trying to create that atmosphere that people like. Atmos­phere makes up about 90% of it. When customers walk in, everything matters – from how they’re greeted to the amenities in the waiting area.” 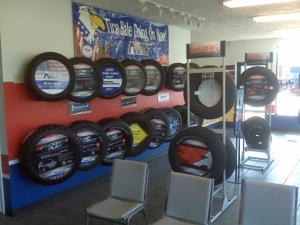 When customers arrive at Triple T, the staff and technicians take extra time to educate them by explaining the features and benefits of the work that’s being done on their vehicles.

“We’re able to ask them questions and walk around their car,” says Jeff. “That’s what we found has been best when it comes to educating consu­mers. It’s not necessarily what we tell them, it’s what we show them. We show them the interest we have in solving their problems. I think that’s one difference in comparing us to a big box.”

Once the job is completed, Triple T offers a competitive Tire Pros warranty on tire purchases, as well as mechanical work. “We have the warranties written and offer them to customers before they leave,” says Jeff. “That’s kind of the icing on the cake.”

Employee Expectations
Across its three stores, Triple T has approximately 25 employees, many of whom have been there for a number of years.

“I think that creates another rapport with customers,” says Jeff. “They know they can come back and talk to the same person they talked to last time. That’s where the relationship is built.”

“Most of our mechanical technicians are encouraged to have ASE certifications,” says Jeff. “For our tire guys, we concentrate on TIA certifications, so when we advertise on the web or in commercials, people know we’re here and that we are trained to take care of them.”

Extended Support
Outside of the dealership, Triple T is very ac­tive in the local communities it serves.

For the past 10 years, the shop has been a major of sponsor of the Salvation Army’s Toys for Tots drive, gathering more than 20,000 toys for local children during the holiday season.

It also has been involved in de­monstrations and training of area Boy and Girl Scouts on vehicle maintenance and safety.

Triple T supports local schools with various sponsorships and offers the Firestone FFA Scholarship. Addition­ally, company representatives serve on the Dyer County Fair Board of Direc­tors and on the Chamber of Comm­erce Business Board.

While Jere is mostly retired, brothers Keith and Jeff are still active in the business. Although the third generation of Tuckers is still young, Jeff says they hope to pass the family business down one day.

“We don’t know what to expect yet, but I think we see some interest there,” says Jeff. “We want them to pursue their own thing first and if they do want to be involved, we’ll be happy to help them along.”