Just as vehicle telematics are affecting maintenance and repair, tire telematics are becoming reality, as well. Though several tiremakers may be working on “smart” tires or TPMS developments, Continental and Pirelli already have made waves in this arena. Here’s what their developments mean for right now, as well as a look ahead. 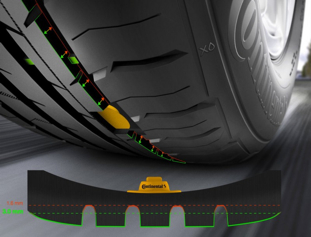 Continental has developed TPMS sensors – for both commercial truck vehicles and passenger vehicles – that attach to the innerliner of the tire and accurately communicate both tire air pressure and temperature electronically to the driver of the vehicle, according to Terry Smouter, business development manager for Continental Tire the Americas’ commercial vehicle tires division.

“In the future, Continental’s tire sensors will be able to conveniently read tread depth electronically,” he adds. “Intelligent software deduces tread depth from gradual changes in tire rolling characteristics. The in-tire pressure sensor infers running characteristics from the variations in tire deformation. This new feature is tentatively slated to be available as of 2017 in new vehicle models equipped with direct TPMS.”

While commercial fleets are the most obvious candidates for such technology,  Smouter believes passenger car drivers will buy into the concept, as well.

“Commercial vehicle fleet managers that use it now know exactly what is happening with their vehicles on the road at all times,” he says, citing vehicle positioning, hours of service, engine performance, fuel economy, and crucial tire information as examples. “I believe the same type of information would be very useful for the passenger car drivers of the future and I do believe drivers will buy into this concept.

“I can imagine some vehicle owners analyzing real-time, vehicle-generated data on their smart devices or computers just as they would analyze their investment performance,” he adds. “For those drivers who would prefer to provide that information to the professionals, I can imagine vehicle information being sent directly to a preferred repair shop or tire dealer so they can notify the driver when it’s time to bring their car in for maintenance before a major problem occurs.”

Tracking vehicle behavior through telematics is already saving fleets a significant amount of money annually, he notes, adding “a smaller scale version of this will make it to the passenger vehicle market eventually and probably sooner than we think.”

At some future date, even using such tire sensors to help predict demand could aid tiremakers in production, but mostly on the commercial side.

“Tire contracts and agreements tire manufacturers have with commercial fleet customers give this concept much more traction,” Smouter says. “This would allow the tire manufacturers to have the appropriate tires ready for those customers and prevent any supply delays. On the passenger vehicle side, there are probably too many factors that affect the tire buying decisions made by the end consumer. Tire manufacturers could benefit from the overall industry demand based on tire wear gathered and then just split those numbers up by current marketshare to give them loose demand projections.”

Under development at the tiremaker’s Milan, Italy, headquarters, Pirelli’s Cyber Tyre features embedded sensors and is designed to provide information about vehicle performance and road conditions to improve safety and efficiency.

While not currently in production for passenger cars, various stages of Cyber Tyre prototypes have surfaced beginning as early as 2005, according to a recent article by Europe’s Tyres & Accessories. Pirelli representatives say the result will be “unprecedented levels of safety and performance, adding to the active and passive safety systems that are already present on modern vehicles.” 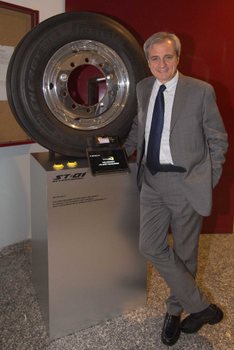 Pirelli R&D, along with the department of Mechanical Engineering at Milan University, is at work developing Cyber Tyre’s autonomous electronic sensor – essentially, a one-square-centimeter device that allows the tire to “read the road and its interaction with the tire,” sending data wirelessly to the car’s on-board computer and other electronic systems in real time. Data is then displayed to the driver via a graphical interface, according to the T&A article.

The sensor is capable of interpreting the grip available, analyzing road conditions and surfaces. It also can “sense vertical, lateral and longitudinal forces on the tire, calculating how much speed can be carried before aquaplaning occurs, as well as how much grip is available before the car starts to skid,” reports T&A. “Other data fields include information about the type of asphalt on the road, the footprint and angle of the tire, as well as tire temperature, pressure, wear and number of revolutions. The sensor also acts as each tire’s ‘passport,’ carrying unique information about its identity.”

Essentially, Cyber Tyre “directly interprets all interaction between the tire and the road in real time, providing advance information about how conditions are changing and any trouble ahead. As a result, safety margins are calculated instantly and conveyed to the vehicle’s control systems, which can then react immediately to the conditions and put in place optimal safeguards against any impending hazards,” T&A states. “In particular, Cyber Tyre allows cruise control and brake assist systems to react, adjusting speed and braking with total precision to suit the surface conditions.”

Pirelli’s commercial version of the technology, CyberFleet, is already in use by European and South American trucking fleets. CyberFleet automatically monitors tire pressures and temperatures, helping to optimize fleet costs by reducing fuel usage, while making tire maintenance and pressure checks more efficient, according to T&A.