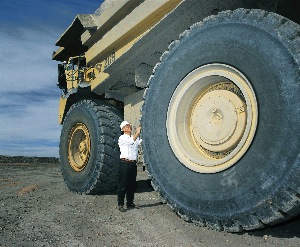 The OTR tire market has gone through drastic supply and demand changes over the last several years, making it tough for dealers – and manufacturers – to adapt. The good news is things are forecasted to stabilize in the near future, even in the hard-to-produce 57- and 63-inch sizes.

In the earlier part of the last decade, rapid growth in developing countries, large amounts of military orders and the soaring mining industries in North and South America caused a massive OTR tire shortage, particularly in the giant OTR niche. Tire manufacturers boosted capacity to meet this added demand, and while smaller sizes had caught up by 2008, giant sizes were still hard to come by.

Then came the global economic recession, which slowed the bustling construction and mining industries, resulting in a sizeable decrease in demand for all OTR tires. In fact, sales in this segment declined by roughly 30% in 2009, according to Gary Nash, director of OTR tire sales for Yokohama.

“The global recession rebalanced supply with demand as many mining growth plans were temporarily idled,” says Brian Bondarenko, general manager of OTR tires for Goodyear. He noted that while certain sizes (mainly 27.00R49 and 33.00R51) may still see some shortages the industry is “nowhere near the imbalance that was prevalent of the commodity super cycle of 2004 through 2008.”

While demand for OTR tires – particularly giant sizes – skyrocketed, tire manufacturers boosted capacity at their plants. Yokohama and Bridgestone opened new factories in Japan, in addition to Bridgestone adding capacity in its existing Bloomington, Ill., plant. Titan invested in its Bryan, Ohio, facility to produce 57- and 63-inch mining tires, which entered production in July 2007. BKT added capacity at its plants, all three of which are located in India.

Michelin recently inaugurated a new earthmover tire plant in Campo Grande, Brazil, which will produce 25- to 49-inch tires; the tiremaker is also planning a truck, semi-finished and OTR tire plant in India, with production scheduled to begin in 2012. Goodyear made continuous manufacturing improvements, and in October 2009, the tiremaker announced it was entering the 63-inch segment.

With production ramped up and demand falling, the OTR market in general no longer faced a shortage. “At the end of 2009, the OTR business had come to a standstill,” says Rami Bitran, manager of BKT’s North American team. “There was an excess of stock and right now people are buying that stock. Everyone is holding their breath waiting for the market to break loose again.”

The slowdown helped giant OTR production to nearly catch up with demand. And although manufacturing capacity was added during a time when end-users couldn’t get enough of the large OTR tires, the recession and subsequent lack of demand will not cause a glut in this segment, tiremakers say.

“Only a few manufacturers produce 57- and 63-inch radials, so the demand will be stronger than production,” Yokohama’s Nash says.

“We are working with customers to anticipate their needs and will adjust accordingly,” says Roger Lucas, vice president of sales and marketing for Michelin Earthmover Tires.

Each of the tiremakers mentioned above expect growth in the OTR segment, although it will begin somewhat gradually. “Some improvement – about 5% to 10% – is expected in 2010, but a full recovery is not expected for several years,” Nash says.

“Slowly increasing growth is expected in 2010, and it is expected to gain momentum in 2011,” says Paul Hawkins, vice president of OTR sales for Titan.

Supplying the End-User
As construction and mining return to full levels, dealers need to be prepared to offer end-users the right tire for the application. To reduce downtime and be able to forecast which sizes to have readily avail­able, the communication chain bet­ween manufacturer, dealer and end-user needs to be stronger than ever before.

“At a dealer level, the importance of accurate forecasting and anticipating the needs of their customers is paramount to being able to meet the demands of this market,” Michelin’s Lucas says.

“Dealers have opportunities to improve by continuously adding value for their customers,” says Goodyear’s Bondarenko. “This can involve training, working to help improve their customers’ operations, assisting reduction in overall tire cost per hour and ensuring product is available as economic cycles run their course.”

Dealers can also shore up their business in this segment by diversifying. In order to gain new accounts, Yoko­hama’s Nash recommends dealers seek out all areas of industry, including construction, rock quarries, mining, port authority, and any federal, state and local government projects. Dealers can also add services like retreading, repairing and foam filling, he notes.

For hard-to-find giant sizes, end-users will likely need to continue what they’ve been doing during the shortage the last few years – relying on other alternatives, including bias tires and retreads, BKT’s Bitran says.

Quality Matters
When the OTR shortage was at its peak, the industry saw a number of offshore manufacturers crop up to address the need for additional supply. While this provided more product for dealers, it also raised concerns about quality.

Now that the OTR market has stabilized, this has become less of an issue, according to Michael Poirier, general manager of corporate accounts for Bridgestone Americas’ OTR division.

“This has slowed tremendously since the initial wave proved to be of very poor quality,” he says. “We still anticipate there will be some imports but do not expect very high quality.”

“As is the case in any exceptional market condition, there are those who seek short-term benefits,” says Michelin’s Lucas. “However, we anticipate that the long-term strategy we employ – offering quality, value and service – will continue to serve our customers and provide them with long-term, lasting benefits.”

He notes Michelin’s radial technology brings OTR customers “tremendous value over the life of the tires. Not only can OTR companies decrease their cost over time, but radial OTR tires contain environmental advantages that reduce a company’s carbon footprint.”

Also on the subject of quality, Nash weighs in: “All tires produced by Yokohama are certified by ISO standards and many steps are taken to keep Yokohama as ‘first in class’ for performance and casing integrity. We consider the retreading of our products as a must when achieving the lowest cost per hour for our dealers and end-users.”

Hawkins adds, “Titan tests its OTR tires both in the field and in our testing facility on the world’s largest bull wheel. Titan is able to test a multitude of tire specifications, including casing integrity and heat characteristics under varying loads and speeds.

“We also use a variety of analytical tools such as finite element analysis to optimize tire designs. Our engineers at Titan Wheel have designed OTR wheels to further optimize tire perfor­mance, using strong, seamless forged rings for durability and our Accel­erated Change Technology wheel that allows tires to be changed or rotated on mining trucks in nearly half the time,” he says.