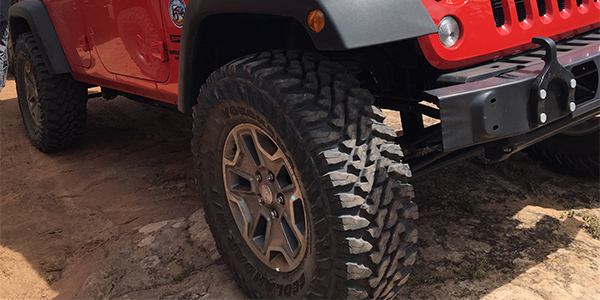 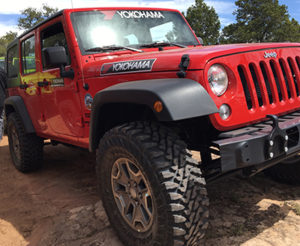 Positioning itself for growth in the light truck and off-road segments, Yokohama Tire Corp. is introducing a new mud-terrain product to its Geolandar line of light truck tires. Soon to be available to tire dealers in North America, the Geolandar M/T G003 was unveiled May 15 to industry and national media gathered at the Gateway Canyons Resort in Gateway, Colo.

The launch event in the pristine mountains of Colorado included two types of ride-and-drive tire-testing opportunities – the morning was spent behind the wheel of Jeep Wranglers tackling rugged mountain terrain and the afternoon was spent speeding around the bends and jumps of a short course strapped inside “trophy truck wannabes,” modified caged V6 Ranger Baja buggies.

An estimated 55 additional guests including tire dealers and distributors from across North America will be introduced to the tire at the same venue later in the week.

“We’re launching it first in the U.S. for global distribution; that’s going to happen in July,” said Bob Abram, senior manager of product planning for Yokohama. “The lineup itself is going to have 37 sizes. About 20 will come out initially and then we’re going to expand 12 more in the next month or two after that, then five more coming out to round out the fourth quarter. We will have 15-20-inch rim diameters, up to 37-inch overall diameter and we’ll be introducing our new Geo-Shield 3-ply technology in all load range E and load range D sizes.”

“When we were doing our consumer research, everyone who buys tires wants them to last longer, no matter what brand of tire,” said Abram. “One of the main functions of the [new tire] compound used is to give you extended tread life. We also worked on the construction.”

He explained that the tread design is intended to be wider and flatter, which also can reduce tread wear by more evenly distributing the stress on the tire which results in reducing hot spots, heat and friction for better tread life. The tread is designed more complete contact area under both partial and full loads. Abram also said the new Geolandar M/T offers an 8% longer tread life in comparison testing.
For consumers interested in a more rugged look, the Geolandar M/T G003 features angular mid-blocks, a square open shoulder, raised black lettering and sidewall armor. In addition to a unique look, that toothy pattern extended to the sidewall allows for better grip on off-road surfaces. Abram added that consumers wanted extra protection on the sidewall to better protect the tire from abuse.

The tire is also designed to be ‘the strong, silent type.’ The tread’s block pattern has been designed with a new pitch variation for more even harmonics resulting in a quieter tire for increased passenger comfort. Testing by Yokohama showed the M/T is 2.3 decibels quieter on the road compared to other leading tires in the space.

In a conversation with Fardad Niknam, Yokohama’s director of LTR segment development, he admits that it’s difficult to show the difference that 2.3 decibels can make, but said it’s definitely noticeable. “It’s the difference between people in the back seat being able to have a conversation.”

In what Yokohama describes as “aggressive traction,” the tire also has an optimized block-to-void ratio, optimized sipes and advanced mud and stone ejectors which combine to provide better off-road traction and better wet traction, allowing drivers to stop shorter (by up to 51 feet shorter on wet pavement, according to company testing).