Measuring the steering wheel position angle and rate of turn, which are critical for electronic stability control systems, is the job of the steering angle sensor. The scan tool will typically display the information in degrees.

Measuring the steering wheel position angle and rate of turn, which are critical for electronic stability control (ESC) systems, is the job of the steering angle sensor (SAS). The scan tool will typically display the information in degrees. 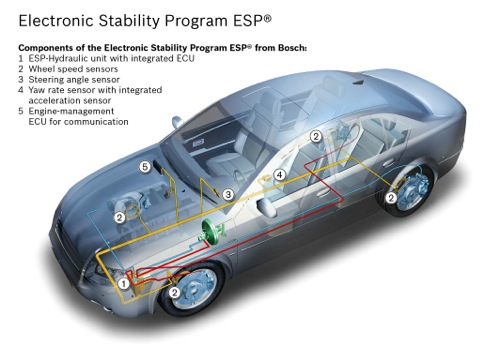 Analog SAS
Analog SASs are similar to throttle positions sensors. SASs are wired with a 5-volt reference, chassis ground and signal output. To test the SAS, you have to back probe a connector that is typically under the steering column.

With the wheels straight ahead, one sensor reads 2.8 volts and the other 0.4 volts. If the voltages were the same, it could be a sign the signal wires were shorted together.

With the wheel turned fully to the right, the voltages do not match, which is perfectly normal.

Digital SAS
A digital SAS is often called a “contactless sensor.” This type of sensor uses LED light, a wheel that acts as a shutter and an optic sensor that measures interruption in the light, just like a distributor on a Chevy LE1 V8.

The signal for these types of sensors is a digital square-wave signal. The frequency of the voltage changes depending on the speed the wheel is turning.

The sensor clusters for these sensors often contain a third sensor just to measure if the wheel is centered. With the wheel straight, the voltage is close to 0 volts. When the steering wheel is moved off center, the voltage goes high.

Can Bus Module SAS
Some SAS clusters and sensor modules connect to a controller area network (CAN) bus. The SAS module can connect directly to the ABS/ESC module on a CAN bus or it can be part of the overall CAN in a loop that connects various modules in the vehicle.

A CAN bus is a high-speed serial data network that communicates in binary language to other modules or nodes. When you connect your scan tool to a vehicle, it becomes a node on a network. High-speed CAN buses, like GM LAN, use only two wires per module or node to communicate vast amounts of data.

This means that a node, like an SAS module, has to have the ability to interpret and create signals that can be understood by other modules on the bus.

If you are in this situation, it is possible to observe how the actuation of a sensor, switch or component can change activity on the bus.

All CAN bus modules have power and two high-speed CAN wires. One wire toggles the voltage between 1.5 and 2.5 volts and the other wire will toggle the voltages between 2.5 and 3.5 volts. Serial data buses toggle the voltages on the network to produce the 1s and 0s of binary language. This toggling of the voltages communicates information and commands.

If you connect your scope between chassis ground and the bus wires and look at voltage, it is possible to see packets of data being communicated on the bus.

On a direct-type SAS CAN sensor, you can see the sensors communicating with ABS/ESC module as the wheel is turned. It is impossible to tell what is being communicated, but it is possible to see they are communicating.

On some vehicles, the SAS sensor cluster is part of a module that may include switches for the turn signals, steering wheel audio controls and wipers. This module might have multiple CAN lines coming out of it. Often, the SAS cluster cannot be replaced on its own. It might require replacement of the entire unit.

Resetting SAS
Many vehicles require the SAS be reset or recalibrated after an alignment is performed or parts in the steering system are replaced. There are three types of reset procedures: systems that self calibrate on their own, vehicles that require specific wires or buttons be pressed, or systems that require recalibration with a scan tool.

Even if the SAS is out of calibration, most vehicles have ways of sensing if it is traveling in a straight line. If the angle is far enough out of range, it might set a trouble code and disable the ESC system.

Self-Calibration
On some Chrysler vehicles, recalibrating the sensor after an alignment or if the battery has died, is just a matter of turning the wheels lock to lock, center the wheel and cycle the key. This “auto learn” is becoming more common on newer vehicles.

Scan Tool SAS Reset
There are many options for scan tools to reset SASs. Some tools are even integrated into an alignment system. But, most tools recommend that the calibration be performed on a level surface. Also, it is a good idea to perform a lock-to-lock turn to complete the calibration.

While performing the zero-point calibration on Toyota vehicles, do not tilt, move or shake the vehicle. The vehicle must remain in a stationary condition throughout the entire process. Be sure to perform the procedure on a level surface with an inclination of less than 1%.

2. Turn the ignition switch ON.

3. Using a jumper wire in terminals 4 and 12 of the DLC, repeat a cycle of short and open between terminals four times or more within eight seconds.

4. Verify that the VSC indicator light is lit indicating the recorded zero point is erased.

5. Turn the ignition switch off.

6. Be sure the jumper wire is disconnected.

7. Turn the ignition switch on.

8. Check that the VSC warning light goes off about 15 seconds after the ignition switch is turned on.

9. After ensuring that the VSC warning light remains off for two seconds, turn the ignition switch off.

11. Turn the ignition switch on.

12. After turning the ignition switch on, check that the VSC warning light is lit for about four seconds and then starts quick blinking at 0.13 second intervals.

13. After ensuring the blinking of the VSC warning light for two seconds, turn the ignition switch off.

15. Drive the vehicle for at least 5 minutes to confirm zero-point calibration is complete.

If viewing the scan tool after the repair, the SAS may remain at 1150 until the vehicle reaches 28 mph. This is a normal condition until the learned values of the steering angle have been achieved.