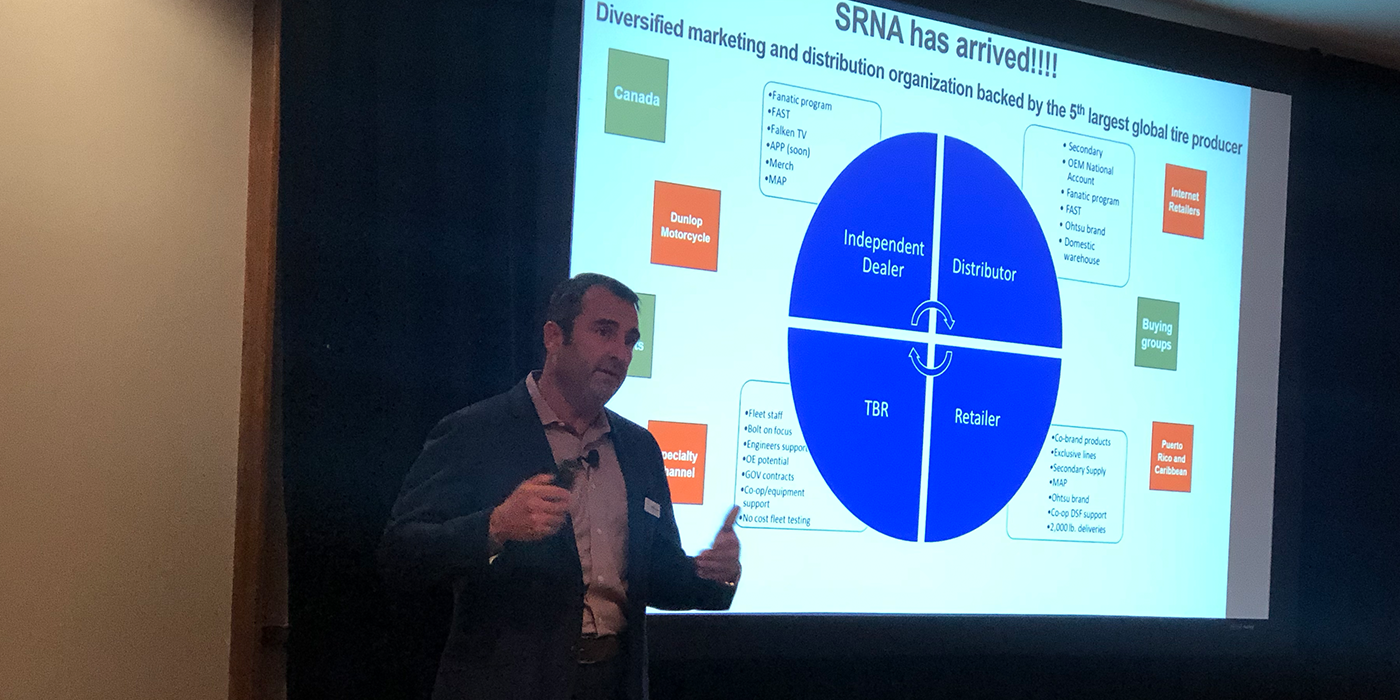 Sumitomo Rubber North America leadership demonstrated the strength of the company and its Falken brand, and addressed how it’s handling backorders at its dealer meeting Sept. 13 at the Viceroy Snowmass Hotel in Snowmass, Colorado.

Despite supply challenges and raw material shortages that plague today’s tire industry, Falken Tires has a lot to celebrate, as evidenced by its four-day dealer meeting amid the majestic peaks of Snowmass, Colorado, near Aspen. More than 25 dealers, distributors and their guests, along with Falken Tires leadership, gathered to celebrate not only being together but also the challenges they’ve overcome after a year and a half of uncertainty.

“It’s great to see everybody face to face,” said Matt Leeper, Sumitomo Rubber North America’s (SRNA) vice president of sales. “We appreciate you being here and your business. It means a lot.”

SRNA leadership demonstrated the strength of the company and its Falken brand during a dealer meeting Sept. 13 at the Viceroy Snowmass Hotel’s Grand Ballroom. The meeting was flanked by activities such as a hike around the Maroon Bells, a Jeep tour in the mountains, fly fishing and hot air balloon rides as SRNA’s guests enjoyed mingling with industry peers. For many, it was a first in a long time.

To start out the meeting, Leeper proclaimed, “SRNA has arrived” while listing the products, services and promotions the company has been able to offer its customers after it dissolved its global alliance with Goodyear in 2015. Under SRNA’s alliance with Goodyear, the company was unable to have manufacturing or testing grounds in the U.S. and couldn’t pursue OE fitments in the states. Now, the company has gained key OE fitments with the 2021+ Ford Bronco Sport, Jeep Gladiator and Toyota RAV4 TRD, as well as committed $122 million to increasing production at its manufacturing facility near Buffalo, New York.

“We’ve got a lot of things that we can do now that we weren’t able to do initially because we were handcuffed by that agreement with Goodyear,” Leeper said. “So, what’s happened since then is we’ve become a diversified and fortified sales organization with a lot of capacities in the tire industry.”

Leeper said this includes growing the number of Falken FANATIC dealers in its associate dealer program to nearly 10,000 as well as adding to its FAST team, its field sales organization that signs up Fanatic dealers and provides merchandising and signage services to dealers. In addition, Leeper said Falken has instituted MAP pricing, or minimum advertised pricing, which helps independent tire dealers rake in a profit margin of more than 20% on most Falken products. The brand has also upped its FANATIC dealer program payouts to $10 per tire this year, which has led to greater compliance with the program.

On the TBR side, Leeper said the Falken brand has grown its fleet staff and has OE potential as well as government contracts. For distributors, Leeper noted the success of the brand’s OEM national account program and secondary supply. In addition, the brand has a presence in Canada, has shown growth in its Dunlop motorcycle tire business and has positive relationships with Internet retailers, Leeper said.

“We’re a big-time player,” he said. “We’re backed by the fifth largest producer of tires in the world [Sumitomo Rubber Industries]. We’re in all sectors and diversified. We’ve got a presence and we’re going to make the most of it.”

While SRNA’s products and programs have ramped into high gear, its executive team addressed the big concern on dealers’ minds: tire supply and backorders.

Rick Brennan, executive director of marketing for Falken Tire, said the economic effects from the COVID-19 pandemic have changed the industry dramatically, and all manufacturers, including SRNA, have run short of product. “A lot of these challenges were unforeseen,” Brennan added.

However, at the onset of the pandemic, tire sales dropped and many manufacturers, including SRNA, shut down their factories for several weeks. This led to having a surplus of tires: More than six months of inventory on hand for passenger tires and six months on hand for light truck tires, Brennan said.

“So, we could all fill a lot of stuff in May, June, July and August of last year, but when we ran out of inventory, backorders went up,” Brennan explained.

Because a lot of inventory was depleted last year, Brennan said SRNA started out the year low on inventory, especially in P-metric light truck and LT sizes. Brennan said adding to this is a shortage in the equipment used to manufacture those tires. He also noted that LT-metric and flotation sizes are 1.3 months behind on inventory.

As of August this year, SRNA was able to keep pace with filling most passenger tire orders; however, fill rates have declined for Falken’s CUV, SUV and light truck tires—namely the brand’s Wildpeak and Rubitrek lines, as well as the Ziex CT60 A/S.

For TBR products, Falken’s orders exceed its inventory in stock. Currently, Falken has 1.3 months of stock on hand, which hasn’t been enough to keep up with orders.

However, despite the increase in container prices, backorders and containers sitting at the Long Island port, SRNA has had steady growth.

“For the most part, we’re able to keep up with a 75-80% fill rate because our warehouse is doing such a great job of bringing in inventory,” he said.

Giving dealers a glimpse into what 2022 will look like, Brennan said SRNA is making major investments in manufacturing, particularly in its Tonawanda, New York, plant to ramp up production. In February this year, the company announced it would invest $122 million in production technology updates for the plant, including automating production and enhancing the plant’s mixing and compounding capabilities.

“There are machine changes that will increase our capability in P-metric light truck and light truck,” Brennan said. “Investment is being made to increase TBR and even motorcycle going forward for next year, so things are looking better for our ability to supply what you need.”

A new rugged-terrain tire, drive tire and all-season UHP tire—which Falken leadership says pushes the limits of performance—will be launching next year for the Falken brand as it looks to refresh its product lines. The Falken team also previewed its new products during its dealer meeting this year. Click the link below to check them out!