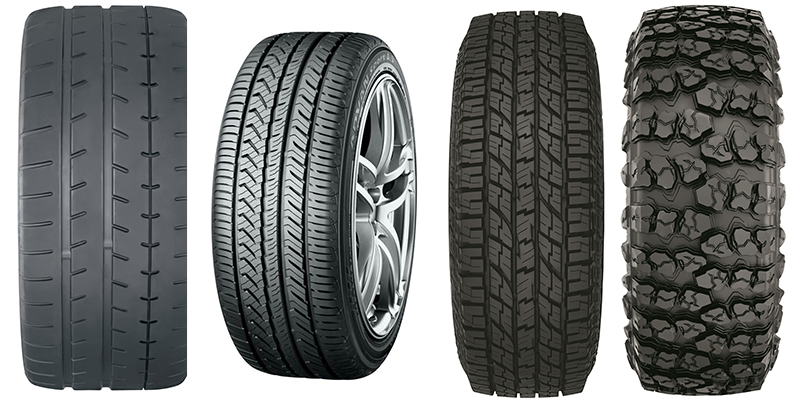 Most consumers don’t realize how much tire design can have an impact on vehicle performance and overall passenger comfort – and comfort includes the sound of silence.

While test drives and lab results are the best way to determine tire noise levels, these images of tread patterns provided by Yokohama Tire North America show how the changes in tread result in increasing noise, from quietest to noisiest (left to right).

Most consumers don’t realize how much tire design can have an impact on vehicle performance and overall passenger comfort – and comfort includes the sound of silence. While many tire dealers focus customer conversations around price, mileage warranty and road-surface handling, the noise generated by tires once mounted and in use can make a huge impact in owner satisfaction.

When the rubber meets the road, tire design and surface conditions contribute to the creation of sound vibrations as a tire travels across pavement. This sound passes through the air and up through the vehicle chassis, ultimately resonating inside the vehicle cabin.

According to Sam Knisley, research specialist with the Kenda America Technical Center team, the sound that starts with the tire  travels to the vehicle’s occupants via different paths.

“Lower frequencies typically make their way from the tire to the vehicle cabin by vibrations relayed from the tire through the suspension components and into the vehicle cabin. This path is referred to as ‘structure-borne’ noise,” says Knisley. “Higher frequencies disturb the air around the tire, creating sound waves that travel to the vehicle occupants’ ear, and thus this path is called ‘airborne’ noise. Both structure-borne and airborne noise sources contribute to the sound comfort perceived by the driver and passenger.”

Ian McKenney, systems engineer with consumer tire development at Bridgestone Americas, says the range of noise can be a distraction.

“Tire noise can take away from passenger comfort and distract from the driving experience,” says McKenney. “Tire noise encompasses a wide range of sounds. For example, pattern noise typically consists of a high-pitched whistling sound, while cavity noise can lead to a slight ringing. Many of these sounds are ever-present in tires, but when the amplitude of the sound becomes too high, it can lead to driver annoyance and complaints.”

But with so much sound surrounding us, what makes a tire seem noisy? Kenda’s Knisley says it’s the science of measurable audio frequencies that stand out from what we’re used to hearing that will trigger a complaint.

“The human ear can perceive frequencies in the audible range from 20 Hz to 20 kHz; our hearing is most sensitive in the 200 to 5000 Hz range,” Knisley says. “These audio frequencies traveling via structural vibrations or through the air are most objectionable to the user when individual frequencies stand out from a more uniform background noise. The most desirable type of noise is a uniform level, spread across a wide band of frequencies, often referred to as ‘white noise.’ Peak frequencies rising above this white noise create discomfort for the user….”

As the vibrations of the physical tire can pass through vehicle structural components and create additional cabin noise, depending on frequency, this noise can amplify the vibrations from other mechanical components of the vehicle. To better blend those sound waves, tire engineers can design the tire and its tread to literally “tune” the tire’s sound frequency so that it does not align with the frequencies of other vehicle components, which reduces that amplification effect.

Sound recordings made on the test track and in the lab are analyzed to help target which aspects of the tire design should be modified to quiet the tires for human hearing frequency ranges.

While the elements of a tire, such as belts, rubber compounds and even sidewalls, have a role in the sound frequencies produced, the largest factor in noise is the tread, specifically how air escapes through the voids (or non-rubber areas) of its design as the contact patch meets the road.

The placement of those voids and sipes (asymmetrical vs. symmetrical) can impact the sound generated as a vehicle travels down the road. Similar to making music, that sound made by airflow through the void areas can be adjusted to create a more pleasant user experience.

“Tire treads are infinitely complex and generate noise in many different ways,” says David C. Poling, manager of the replacement consumer tires division at Giti Tire (USA)’s North American R&D center. “One of the main methods is due to the compression of air, or ‘air pumping’ in the tire voids as it rolls through contact with the road. Tire grooves can also act like pipe organs, especially longitudinal grooves. This pipe resonance can also be affected by interaction with the lateral grooves. When the tread blocks impact the road surface, this also can generate noise, which is why larger, stiffer blocks generate more noise. The tire will also stick and slip on the road which will create noise. The internal air cavity of a tire can also generate noise, known as cavity resonance, due to harmonic standing waves.”

But depending on the fitment and needs of the customer, certain tires will simply be louder than others. A tire designed for grip like a mud-terrain or winter tire design with stiffer blocks and deeper grooves will be louder on the highway compared to an all-season touring tire. There is a reason for that, yet it continues to be a trade-off consideration for design engineers.

“Generally speaking, tread patterns with wider and deeper grooves generate more tread noise than those with less aggressive designs,” says Chuck Yurkovich, senior vice president of global R&D with Cooper Tire & Rubber Company. “For example, tread patterns designed for ultimate off-road traction with deep grooves create more noise than a passenger car tire. It’s part of the trade-off in having a tire designed and constructed for off-road adventure versus on-highway service. At the other end of the spectrum, high-performance tires that have a shallow tread depth and narrow lateral grooves will generate much less tread pattern noise.”

When it comes to more granular detail of how the sound is generated, Rick Phillips, vice president of sales for Triangle Tire USA, says multiple factors contribute to the sounds produced.

“The individual tread elements generate sound as the leading edges make contact with the road and, then again, as the same elements snap out of contact as the tire rolls down the road,” says Phillips. “The tread element shape, angle and relationship between the element and the rib will all contribute to road noise. Then, on top of all that, the road surface itself will have an additional affect on the noise generated by the tire. Asphalt, concrete, etc., will all have differing impacts on noise.”

In addition to tread design and footprint, tire vibration and additional noise can resonate from a tire’s construction, including the belts, belt overlays, carcass plies and apexes, says Goodyear. Engineers can design tires that vary those components to minimize any potential negative characteristics, but they also must be mindful not to trade off noise reduction for other performance characteristics, like ride and handling.

Engineering for a Quiet Ride

So when faced with the need for better performance and longer tire life, how do engineers design for silence?

Cooper’s Yurkovich says it starts with the careful arrangement of the tread blocks to avoid simultaneous tread block impacts, and the creation of what he refers to as a “tortuous path” for the sound to move from the center of the pattern out are a few techniques used in tread design to reduce noise.

He also said that tread patterns that have tread blocks which are less stiff in the circumferential direction may generate less impact noise. Sound levels can also be modified based on tread compound, tread block size and the level of siping, Yurkovich says.

Of course, engineers have to balance all of this with other priorities of tire design, such as wet and dry traction, fuel efficiency, treadwear, rolling resistance and handling.

“Pitch sequencing is also critical to reduce the perceived tire noise. Pitch sequencing is the arrangement of slightly different sizes of tread blocks around the circumference of the tire. This distributes the noise generated by the tread block geometry over a range of frequencies in order to make the noise less tonal and more like ‘white noise.’ Tonal noise is perceived as louder by the human ear even though the level of sound power might be the same.”

Bridgestone’s McKenney says that to design a quiet tire, engineers typically minimize the size of the tire’s circumferential grooves, keep the shoulder slots less open and use a very soft compound.

“Reduced void limits a tire’s snow performance because there are fewer areas in the pattern for the snow to pack. As a result, the tire would lose traction in snow much more quickly,” he explains.

The engineering of sidewalls can also impact a tire’s sound levels. Cooper’s Yurkovich says sidewall designs could potentially generate noise through aerodynamic effects, but “this would be at a much smaller magnitude than the noise generated by the tread pattern.”

With the trends toward low-profile tires, Triangle Tire’s Phillips says the newer designs can actually increase levels of vibration.

“The harder the compound, the louder the impact because the rubber is not absorbing as much energy,” he says. “A softer compound will better absorb noise and vibration. Along those lines, sidewall designs matter because they help absorb vibration. A thicker sidewall is going to dampen noise by absorbing more vibration than a very thin sidewall. The trade-off is that a thinner sidewall is going to be lighter, so it may have better rolling resistance.”

It’s important for the tire dealer to educate customers on the complexity of tire designs and the impact those little details can have on overall performance and comfort.

Kenda’s Knisley says it’s tough to make a “noisy or not noisy” determination of different tires in the same market segment with only your eyes since what you see is not always what you hear.

“For most typical all-season pattern designs, it is difficult to determine strictly from visual appearance whether the tire will be quiet or not,” he says. “Identical designs, with nothing more than minor rib shifting, can range from objectionably noisy to very quiet. Variations in block size around the tire (circumferentially) are also critical, but again, it is not possible to know from a visual inspection if the ordering of these block sizes is beneficial or detrimental. This must be done by the tire engineer during the tire design phase using sophisticated predictive engineering tools that balance noise performance with that of wear, traction and handling.”

The best way to know for sure is to check with the manufacturer. It’s a good idea to have that information on hand for your best-selling tire lines to refer to when discussing sound quality with your customers.

“I think about the only thing a consumer could look for is if the tire looks like it has more void or appears more aggressive, but it’s really hard to say,” says Giti’s Poling. “At first glance during the design process even the engineers aren’t sure; the only way to be sure is to make use of the mathematical modeling tools available to us.”

While engineers can get technical with design intricacies, Phillips offers a more general explanation.

The Sound of Silence: Engineering for a Quiet Ride