Remember when tire dealer showrooms featured rows of refrigerators, washing machines and big television sets, in addition to displays of the latest road rubber? Those showrooms are the stuff of memories now, except at Smitty’s Tire and Appliance Repair. 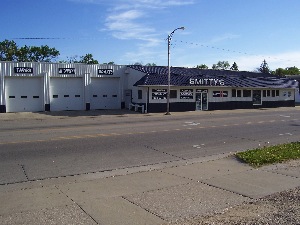 At its two stores in northeast Iowa, in Manchester and Cedar Falls, the family-owned and operated Smitty’s continues to offer that nostalgic merchandise mix. New appliances – refrigerators, ranges, dishwashers, over-the-range microwaves and flat-panel TVs – occupy prime floor space in the 6,000-square-foot showroom. Tires and auto service may appear to be a sideline, but they are closely intertwined with the appliance business, and have been since 1953.

“It’s what makes us different,” says Max Boren, second-generation owner of the Manchester store. “We’re such a small town, about 5,000 people. We only have two traffic lights, but there are 13 places where you can buy a tire or get your car serviced. But we’re the only one that sells and repairs appliances.” In fact, 50% of sales come from appliance sales and repair. Tires account for 37% of the business and auto service makes up 13%. Overall, the business is 70% retail and 30% wholesale. Annual sales for the Manchester store last year were $3.5 million.

Although the Cedar Falls store draws from a much larger population, its sales were about the same because it lacks the wholesale operation.

Even though automotive work may appear insignificant as a percentage of business overall, Boren says his seven-bay shop is seeing 24 or 25 cars a day, almost more than they can handle. The service area waiting room has a dual function: it also brings traffic to the appliance center. “Eventually, folks get up and wander around and look at our appliance show areas, and at some point, when they want a new washer or big-screen TV or freezer, they’ll think of us,” Boren notes. 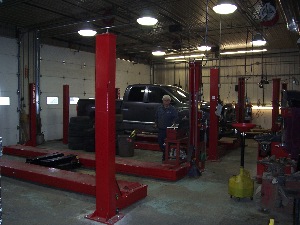 Continuity Counts
Boren’s late father, Wayland “Way-lie” Boren, was given the opportunity to open the Manchester store back in 1955, when Wilson W. “Smitty” Smith (now age 98), a Cedar Falls Firestone dealer, wanted to expand. The elder Boren was working at a Firestone store when Smitty made his pitch: “Move your family to Manches­ter and work for me, and you can hunt and fish whenever you want – if it’s 3 p.m., you can just close the store and go.” The offer was irresistible.

Max grew up “a tire guy,” buffing wheel weights and changing manure spreader tires since he was a youngster (that was in 1964). He has work­ed at the store ever since, except for four years in the Navy and two attempts at college. Now his wife, two children and son-in-law also work in the business.

Smitty’s has ASE-qualified service technicians to handle auto maintenance, tires, brakes, tune-ups, shocks and struts and other techs who specialize in appliance sales, delivery, installation and repair. “I’m very blessed,” says Max. “We have 17 employees and we haven’t replaced anyone since 1999 when we had someone retire.” Customers see the same employees time and time again, and Max says, “That stability is what allows us to be successful and continue to grow.”

Working New Media
Smitty’s has moved to two separate websites: one tailored to appliances and one for tires and auto service, to better compete with the big-box retailers. “The websites are important,” Boren says, “because people now are shopping after we’re closed. Everyone shops online, even in our little town.”
He adds proudly, “We work hard at social media and are now on mobile devices, so we’re pretty excited that we’re going to be that guy that other people worry about.” 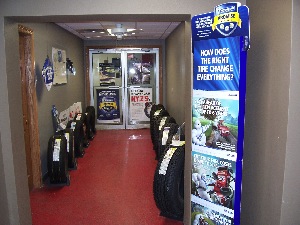 Praise for 20 Groups
Boren is an enthusiastic member of a Dealer Strategic Planning 20 Group, which offers a peer-to-peer business process evaluation, benchmarking and sharing of best practices among non-competing independent tire dealers. When Smitty’s joined two years ago, Boren was a bit intimidated by the

other participants, but he soon discovered that no matter how many stores or employees they have, the other dealers have the same issues he has, only on a different scale.

“These guys were Top Shop winners, and they’re in this group, they’re sitting here taking the same notes and sharing their best ideas just like we are. It’s both humbling and exciting.” He says there’s always something to learn. “Because we’re not competitors, and we’re in different parts of the country, we share P&Ls every month and ask a lot of questions. Without that 20 Group, I wouldn’t have that information to compare. It’s a wonderful deal.”

A River Runs Through It
“Keeping your head above water” has extra meaning at Smitty’s. It’s not just a metaphor for staying in business. It’s become a real-life exercise: the Man­chester store has been inundated by flood waters from the nearby Maquo­keta River seven times in the past 12 years. The last time the water rose, on July 23, 2010, a rushing torrent more than six feet high scoured out the store, curled the service bay doors, blasted out 80 feet of the back wall of the warehouse and caved in part of the roof.

More than 150 appliances and TVs were destroyed and more than half of the 2,500 tires in the warehouse were missing or damaged. And yet the business was rebuilt, redecorated, restocked and reopened in the same location on Nov. 9. Preparedness, past experience, helpful friends and good flood insurance made the speedy recovery possible. 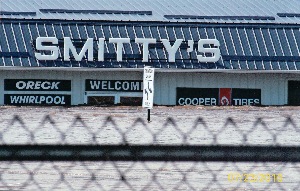 Having to face such a daunting challenge over and over again, Boren has become an expert on flood disaster recovery. He offers a few tips that could help any dealership faced with such a catastrophe.

First, have a flood plan. As soon as Boren knows the river is going to flood its banks, he mobilizes four separate crews who know they have only three or four hours before water enters the building. Boren accepts he’ll lose some shop equipment because it’s too big or heavy to move, but everything else is raised up on the seven lifts or is hauled out. The rest of the store is relocated to wherever there is vacant office space.

Maintain a positive attitude. Talk to someone who’s been through it before. “It looks like the world’s over, but trust me, it’s not, and there are some steps you can take,” he says. “A good attitude helps everyone keep going.”

Document everything. “You can’t have enough photos beforehand,” Boren emphasizes. “When the flood is over, no one can remember all the stuff you had in your office or shop, but it all has value – even pens, paperclips and staplers. Someone is going to ask for a list and you are not going to remember half of what you should be able to claim.” Each office and workspace should have a list of all items, even those in desk drawers, along with photographic proof. Whenever something is added, update the list and make two copies. Keep one in a bank safe-deposit box.

Boren had flood insurance as far back as 1975, but admits he didn’t pay attention until he was hit by the first flood. “Be sure you have enough coverage, at least commensurate with your commercial building/contents policy.”

Why stay in the same location and risk another flood, as happened in 1999, 2004, four times in 2008, and worst of all, in 2010? “The highest traffic count in the county is in front of our store, on Main Street,” Boren says. “We have a two-story, 10,000 square-foot warehouse across the street and an acre of parking, so until FEMA (which issues his flood insurance checks) finally says, ‘We can’t do this anymore; you’ll have to move,’ we’ll just keep rebuilding.”