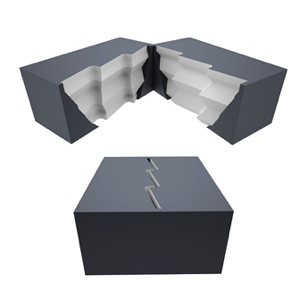 Nearly every tiremaker in the world has been affected by this revolution; those that have chosen to avoid it have simply been left behind.

Unfortunately, these changes have been extremely complex and often badly explained by tiremakers who want to keep their technology as secret as possible. This has forced consumers and tire professionals alike to wade through a sea of tech jumbles in order to determine the correct tire for the job at hand.

A clear look at these twin revolutions in tire technology is necessary, and I will try to provide it here. 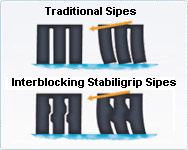 In 1923, a slaughterhouse worker named John Sipe took a sharp knife and cut a series of small slits in his rubber-soled shoes. Finding that these cuts in the rubber gave his shoes much better traction on wet slaughterhouse floors, he went down in history as the inventor of docksiders. And siping.

Some years later, Good­year decided to try the same thing on their tires. Even though tires had grooves and channels to evacuate standing water from under the tread, there still remained a very thin and slick layer of water that interfered with sure grip. But when the tread blocks were cut with small sipes, the cuts opened up as the tread block flexed, creating an area of low pressure that sucked up that last tiny bit of water under the tread, allowing for much better grip. These “rain sipes” soon became a standard throughout the industry.

The next major advance in siping technology came from Nokian, which developed a zigzag siping pattern for winter tires. This “Hakka Sipe” allowed the tread block to flex much more than rain sipes, and created hundreds of angled biting edges that produced extraordinary grip in snow and ice. Nokian’s siping pattern was quickly copied onto nearly every winter tire in the world.

The disadvantage of siping patterns, however, lies in the fact that the denser the pattern of sipes that you cut into your tread blocks, the more they allow the blocks to flex, which leads to squishy handling and much faster wear. From this disadvantage has come the latest revolutionary advance in siping technology: 3-D Self-Locking Sipes.

Although known by many tiremaker trade names, all share the same basic concept. Three-dimensional sipes are cut with an internal topology designed to lock the sipes together and prevent too much flex. This allows for very dense siping patterns while keeping the tread blocks stiff for good handling and substantially reducing treadwear.

The current revolution in tread compounding has mainly to do with the increasingly sophisticated use of silica as a filler material. Traditionally, rubber compounds have used carbon black as a filler, which gives tires their traditional (but not natural) black color and makes the rubber compounds somewhat softer.

Fillers also play an important role in allowing the various layers and types of rubber in the compound to bond together during the curing period when the rubber vulcanizes and takes its final form.

The inevitable tradeoff that engineers must make between grip, rolling resistance and treadwear is known as the “Magic Triangle.” Properly balancing these properties for a specific tire has been the goal of every tire engineer who has ever mixed a compound.

The issue is in the physical property known as hysteresis. Hysteresis is a measurement of how much energy an object returns when rebounding from a deformation. A good example of this is to imagine dropping a Superball and a hockey puck from identical heights. The Superball bounces back to nearly the height at which it was dropped, because it returns nearly all of the energy from the impact with the ground. This is considered low hysteresis. On the other hand, the hockey puck barely bounces at all, because it loses a great deal of energy by not deforming and rebounding. This is high hysteresis.

Most of the rolling resistance of a tire comes from the way in which it deforms and rebounds as the tire revolves under load, which is known as a low frequency distortion. If the tire compound has low hysteresis at low frequencies, it rebounds like a spring and loses less energy, meaning greater fuel economy.

On the other hand, tire grip is determined by how the rubber compound distorts around the unev-­ enness of the road surface, which is known as a high frequency distortion. If the tire has high hysteresis at high frequencies, it conforms to the tiny gaps in the road rather than “bouncing” and gives better grip.

When tire engineers began using silica as a filler material, they came to understand that the silica-enhanced compounds definitely lowered rolling resistance, but in complete opposition to the Magic Triangle, they also enhanced grip while keeping wear constant. Somehow, the use of silica produces a rubber compound that has both low hysteresis at low frequencies and high hysteresis at high frequencies, allowing tire engineers to literally have and eat their cake too. The Magic Triangle has been blown to smithereens by the magic compound.

According to a paper on this issue in the journal Rubber World: “The use of silica can result in a reduction in rolling resistance of 20% and can also improve wet skid performance by as much as 15%, substantially improving braking distances at the same time. Silica also provides substantial benefits in winter tires and all-season tires. Compounds using silica are more elastic and flexible at lower temperatures, allowing better grip and braking during wintry weather.”

So between the use of 3-D sipes and silica-enhan­ced compounds, tire engineers have found ways to enhance grip, reduce fuel consumption and decrease wear to an extent that would have been thought not only completely impossible but utter fantasy just a decade ago.

The revolution has given us tires with 80,000-mile treadwear warranties, low rolling resistance tires that actually grip in the rain, and winter tires that drive like performance tires. New advances such as high-dispersal silanes, oil-free tires, wildly imaginative new siping patterns and silica derived from burnt rice husks are still coming at us year after year.

It’s hard to see where the revolution will take us next year, other than further down the road.

Advertisement
In this article:tire techs

Of Silica and Siping