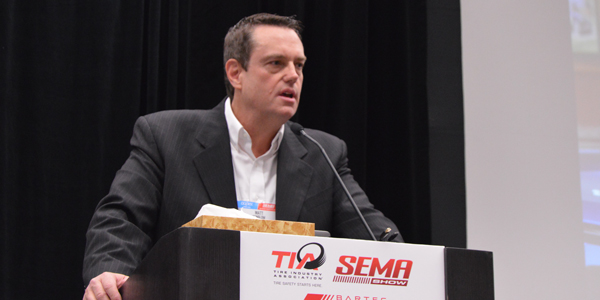 Matt Winslow, an instructor at the Automotive Training Institute, shared with tire dealers at this year’s SEMA Show how they can boost their sales by hiring the right people and tailoring their business to younger generations.

Matt Winslow, an instructor at the Automotive Training Institute (ATI), gave a seminar to tire dealers at this year’s SEMA Show detailing how dealers can more effectively boost their sales by hiring the right people and better tailoring businesses to younger generations of consumers.

Winslow said the job of a service advisor no longer works in today’s business environment due to the way younger generations tend to share their experiences online. Instead, Winslow said, people in that position should be either fired or promoted to a customer relationship manager. That person should be responsible for creating positive relationships with both technicians and customers.

When it comes to retaining good technicians, Winslow told the audience 70% of how someone is engaged in an organization is “basically based on the relationship of that individual and their direct or immediate supervisor.” He said one key to instilling the right behaviors into a service advisor is to pay them a percentage of gross profit.

“When you pay someone hourly, they don’t really have a vested interest in helping the company grow. And if you pay someone salary, they’re a clock monkey. They just show up and punch the hours,” Winslow said. “I think service advisors should be some of the highest-paid people in your organization if they bring their A-game, because they have to manage people and they have to manage money.”

He also told dealers to prepare for their labor costs to “skyrocket” within three to four years due to minimum wages being implemented at $15/hour in many states across the country. He also warned dealers should be prepared to give technicians benefits like a 401K, flexible time off, tuition reimbursement and a supply of tools.

“Tomorrow’s workforce will not purchase tools. They’re just not going to. Why should they? They can go anywhere to make $15/hour, so if you want them to actually do manual labor, you’re talking $20 [an hour] to start plus you’re supplying the tools,” Winslow said. “If you don’t have … all these things, you’re not going to have anyone to work for you. It’s coming. It’s already here.”

Catering to the consumer

Winslow said there are seven steps to effective tire sales. These steps include:

Winslow said tire dealers have the benefit of working in a business where consumers are willing to try out a new company when they’re looking for tires without much effort. However, he said the goal of any dealer should be to retain the business of that customer going forward, and this can be accomplished by setting exit appointments.

“Don’t think that some electrical email, text messages or reminder is the same thing. An electronic or paper reminder is only effective if it reminds me of a commitment I already made when I exited your building,” he said. “A reminder only works when I have a commitment because if you send me a reminder and I don’t have a commitment with you, I can go anywhere. And for consumers, the No. 1 reason to buy anything is convenience.”

Winslow told the audience research from ATI shows customers are six times as likely to show up after setting an exit appointment with a date and time, adding these appointments are even more vital because millennials typically don’t have service work done as often as past generations.

“You’re lucky to see them once or twice a year. And that means every visit is critical,” he said.