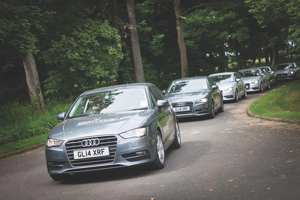 Dutch tiremaker Apollo Vrede­stein BV unveiled two new products – the Vredestein Quatrac 5 four-season tire and Vredestein Snowtrac 5 winter tire – at a mid-June media event in Edinburgh, Scotland. In attendance were more than 600 journalists and tire dealers from around the globe.

Vredestein chief marketing officer Markus Korsten addressed guests at a special dinner in the magnificent Mansfield Traquair, “Edinburgh’s Sistine Chapel.” Scotland was chosen as the location for the program for numerous reasons including its beautiful landscapes and sites like the castle at Mansfield Traquair, said Korsten.

Those landscapes proved the perfect backdrop for a day of driving through the narrow, winding country roads of the Scottish highlands. Media piled into 60 Audi A3s and Mercedes-Benz C-Class sedans, all shoed with the new Vredestein Quatrac 5.

During the road trip, two stops were made – the first at the historic Arniston House in Midlothian, Scotland. The Arniston Estates were own­ed at one point in the Middle Ages by the Knights Templar and the house built on the estate was designed by William Adam, a Scottish architect, in 1726. The Vredestein fleet departed the estate after a mid-morning snack for The Gosford House in East Lothian for lunch and a Vredestein Snowtrac 5 presentation.

In total, drivers tested Quatrac 5 over approximately 90 miles – experiencing a variety of weather and road conditions. Vredestein’s Kors­ten identified this as the second reason to bring media out to the land of bagpipes.

“Scotland is famous for the expression, ‘You can experience four seasons in one day,’” Korsten told dinner guests. The days that Tire Review attended the event showcased Scotland’s typical overcast and somewhat rainy weather, with some sun and warm weather in the afternoon. Vrede­-stein fabricated a giant snowglobe of sorts on the site of the Gosford House where guests could walk inside to eat and view the Snowtrac 5 display – thus completing the four-season experience.

“The last reason,” Korsten announced while an image of Sean Connery appeared on the 124-foot screens behind his podium, “was that Scotland served as the setting for someone as stylish as our Vredestein brands.”

To play up the Bond theme, the post-dinner entertainment was a concert by string quartet eScala, Britian’s Got Talent finalists, which featured their rendition of the Paul McCartney and Wings’ Bond-ode “Live and Let Die.”

The brand’s style was not only reflected throughout the Scotland experience, but the company said it is integral to its position in the market and its products. In 2013, Vredestein won a Cannes Award for its Ultrac Vorti tire introduction film at the Fourth Cannes Corporate Media & TV Awards. The tiremaker followed that effort with two new films, debuted in Scotland, for the Quatrac and Snowtrac.

Not only does its marketing reflect the brand’s commitment to premium styling, the product itself is designed carefully for high-end segments, the company claimed. Quatrac and Snowtrac 5’s sidewall and tread designs were created in cooperation with the Italian design studio ItalDesign Giugiaro.

In its tread design, Snowtrac 5 features ‘Stealth Design,’ a technique that, Vredestein said, was pioneered by the military to make vehicles as quiet as possible and, therefore, undetectable. 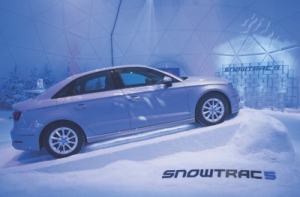 The Quatrac 5’s asymmetrical tread design features both a winter and summer profile. According to the company, the summer side of the tread ensures excellent handling, superior steering precision and lateral grip on dry and wet road surfaces. The winter side ensures exceptional grip on cold or snowy surfaces.

The Quatrac 5 also features an outer longitudinal groove, in which the edges of the groove are placed at different angles. The manufacturer notes that this design further optimizes the stiffness of the tire, resulting in greater stability and enhanced handling on dry road surfaces.
Additionally, Quatrac 5 received the Mountain Peak Snowflake symbol, which means that it complies with the guidelines for where “winter tires” are mandatory.

“The Quatrac 5 is very close to a winter tire, but it is still an all-season tire. As typical with all-season tires, there is compromise. We did not compromise the aspects that affect performance and safety in the winter time,” said Peter Snel, Vredestein’s head of R&D for passenger vehicles.

“The Quatrac 5 caters to applications all across the world. It is suitable for the European market, but of course it can be used in other parts of the world,” said Snel.

Plans for the Americas

The Quatrac 5 has its advantages for North American dealers in colder climates since it couples winter and all-season characteristics.

For that reason, president of Apollo-Vredestein North America Emil Herbak identified New England as a region where the product may prove interesting to U.S. dealers. Besides the Northeastern U.S., dealers in Northern states and the upper Midwest may also find Quatrac 5 worth adding to their product screens, the tiremaker said.

Herbak told Tire Review that the company is looking for opportunities to expand in the U.S., but must do so carefully.

With Canada’s winter tire laws, Quatrac 5 is also a good fit for dealers there, Herbak noted.

Herbak said that Vredestein views itself as a lower Tier One tire, and prices itself accordingly. Herbak men­tioned Pirelli as the company’s primary competitor, and that Good­year and Michelin compete in the same space. In order to grow, Herbak believes that Vredestein will have to continue to leverage the brand’s European success and image, and focus on quality and price.

The Quatrac 5 and Snowtrac 5 are expected to be available in the U.S. this fall.

Amidst the product release event, Luis Ceneviz, president ESSAA region at Apollo Tyres; Onkar Kanwar, chairman of Apollo Tyres; and Neer­aj Kanwar, vice chairman and managing director of Apollo Tyres; along with other Apollo Vredestein BV management hosted a question and answer session with members of the media.

Onkar Kanwar confirmed the development of a $668 million manufacturing plant in Eastern Europe that will produce both passenger and medium truck radials, and in turn allow Apollo to meet current demand in Europe.

At press time, it was learned that the new Apollo tire plant will land in Hungary.

The facility will be the first of its kind for Apollo outside of India, and officials said that it will be commissioned in 2017-18. Kanwar said on Aug. 5 that the plant will have “per annum manufacturing capacity of 5.5 million units passenger car tires and 6.75 lakh units (675,000) heavy commercial vehicle tires.”

Marco Paracciani, Apollo’s chief marketing officer, confirmed that Vredestein will no longer be a truck tire brand, saying that, “The brand strategy for truck and bus is leveraging the Apollo brand’s history and credibility.”