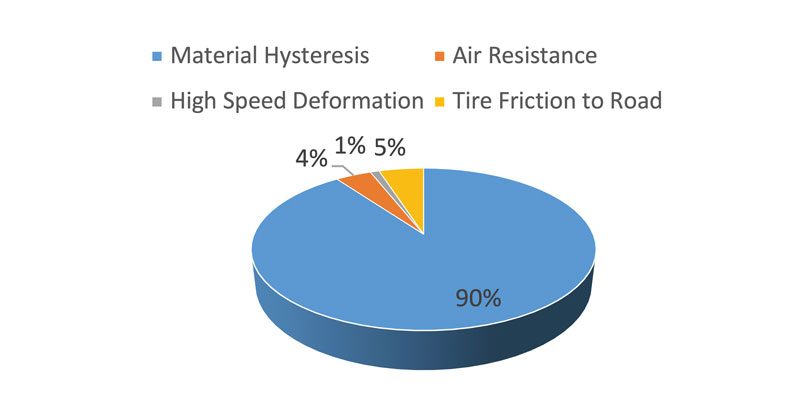 You’ve heard about the benefits of low rolling resistance in tires for years. Now, let’s look at how it works and why.

You’ve heard about the benefits of low rolling resistance in tires for years. Now, let’s look at how it works and why.

The definition is embedded in its name. Rolling resistance is the effort required to keep a giving tire rolling. We have all noticed it! Remember riding a bike with under-inflated tires? It was hard to move it forward. When you inflate the tires back to the original pressure, it’s easier to pedal. This is rolling resistance.

Tire hysteresis – or the amount of energy lost when the tire flexes when it meets the road – is the most important factor affecting rolling resistance. Other factors include air resistance, deformation and tire friction with the road, which can contribute up to 10% to overall rolling resistance of a tire. Figure 1 (above) illustrates the root causes of rolling resistance by percentage.

Each tire component has an effect on rolling resistance. As you can imagine, the tire tread is the biggest contributor to overall rolling resistance due to its connection of the vehicle to the road. The tire loses 44% of its energy from the tread, followed by 26% on the bead area. The remaining parts of the tire (belt, sidewall, inner liner and ply) contribute to 30% of the total energy loss.

There are also external factors that affect a tire’s rolling resistance. Tire inflation pressure, tire load, air temperature and vehicle configuration are among the factors. We’ll explore these forces more in-depth below.

Figure 3 illustrates the direction of rolling resistance improvement when inflation pressure changes. The percentage of improvement depends on what pressure the tire is increasing from, the type of tire and specific design criteria used during development.

The internal temperature of a passenger car tire lies between 20 to 90° C (68 to 194° F), depending on the type of tire, the way the car is driven and the ambient temperature. Within this normal temperature range, the amount of energy dissipated by the rubber components in the tire when subjected to repeated deformation decreases as the temperature increases. In addition to this material effect, increased temperature causes the inflation pressure to rise due to thermal expansion of air in the tire. The amplified pressure increases the tire stiffness and deformations are reduced which leads to a reduction in rolling resistance.

Rolling resistance increases nearly proportionally to the applied load due to higher levels of bending and shearing that take place. When doing the math, the rolling resistance coefficient remains independent to tire load and will not change by tire load increase.

However, rolling resistance increases as a result of centrifugal forces and the formation of standing waves. If a vehicle’s speed exceeds a certain “critical velocity,” then the intensive waves traveling around the circumference of the tire emerge from the trailing edge of the contact patch. To the observer, these waves appear to be stationary, and, therefore, are often referred to as standing waves.

Increased speed increases the frequency of tire deformation, which tends to increase the way the rubber polymer absorbs energy. This then creates an increase in rolling resistance, according to a report from the U.S. Environmental Protection Agency (EPA).

The combined influence of these effects is typically an increase in rolling resistance with speed, but there are some cases where the rolling resistance may decrease as a result of the temperature dependence through the way a polymer absorbs and disperses energy, otherwise known as the tangent of delta. Rolling resistance could also change due to tire construction.

Typically, rolling resistance in lower speed tires (S and T) will increase more than in higher speed tires (H and V) as the vehicle’s speed increases.

Advertisement
In this article:rolling resistance

The Science Behind Rolling Resistance in Passenger Tires